The fake assery of Eminem and Ann Powers


Eminem's freestyle cannot be separated from the increasingly consolidated corporate rule over the US state. The so-called ruling class resistance to "fascism" has taken its cues from actual fascists. This can be seen in the Democratic Party's alliance with war hawks such as John McCain and Max Boot. It can also be seen in NATO's promotion of the "Forest Brothers" in a recently released documentary. The "Forest Brothers" were pro-Nazi guerrilla bands in the Baltic States. They waged terror on Russia in the post-WWII period. Many of the volunteers were former Nazi collaborators. NATO is the most trusted institution of war for both the Democrats and Republicans alike, making it clear that their "resistance" to Trump only clouds the actually existing fascism rising in our midst.
Eminem dislikes Trump not because of racism or substantive policy but because he provides an opportunity to market himself to Wall Street-owned politicians looking to dispose of the Orange blemish. "Resistance" Democrats and Republicans are the same people responsible for the million plus Black and Latino Americans locked away in cages and the millions of undocumented people who have been violently deported by the state. They are the same people who brought us the destruction of Libya, Syria, Somalia, and more. They are the same people who take their orders from the financial and corporate oligarchy whose system of capitalism has run its course, leaving half the world without wealth while their wealth continues to grow. These contradictions have led to the stagnation of profits in the face of misery and contributed to the ascendancy of the orange billionaire in the White House.
Eminem is all set to get paid for his due diligence to the elites. It will be the masses who suffer. Trump won't be the only one flying in his jet until the bombing stops as Eminem suggests. World War III will be a bipartisan affair that carries as its sole purpose the slowdown of US imperialism’s degenerative process. And when the bombs drop, Eminem will be looking for a seat on the Pentagon’s jet.

Sadly, that includes Ann Powers.  The music critic has been a real let down since she moved to NPR.  But now she's written a book.

Go read "Good Golly, What A Folly (Ava and C.I.)" where Ava and C.I. explain how awful the book is.

This morning, Robert E. Lee High School in Tyler, Texas is holding a memorial for Spc Alex Missildine, their alumni who was killed in Iraq at the start of this month. 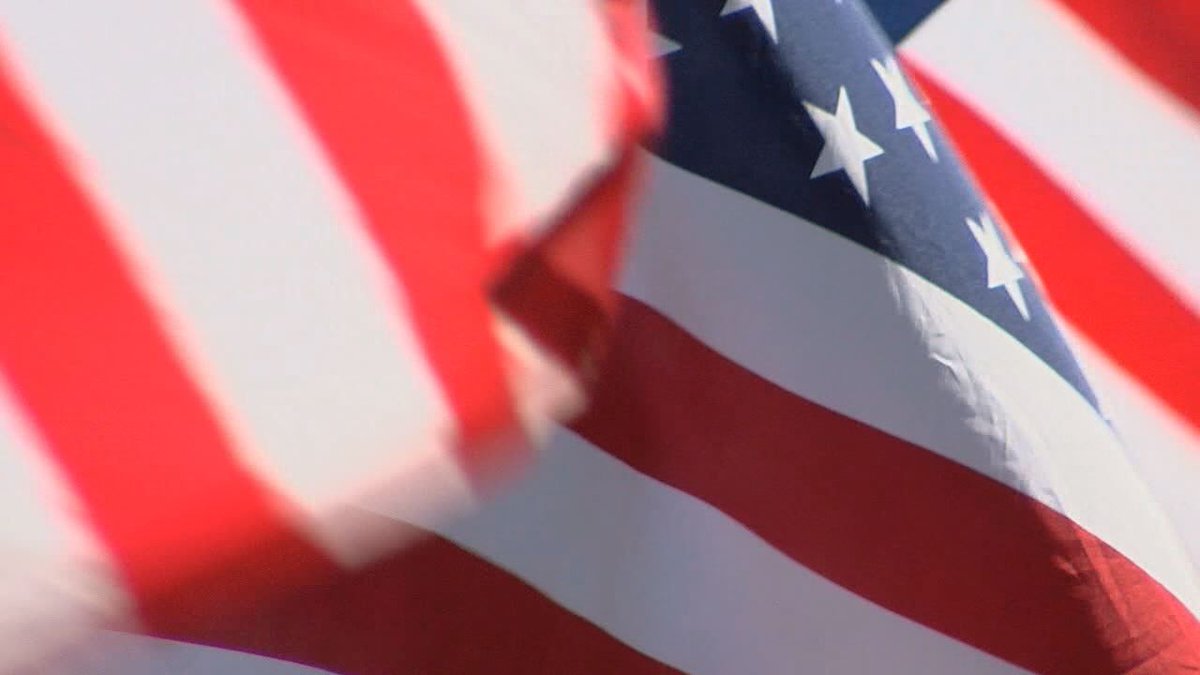 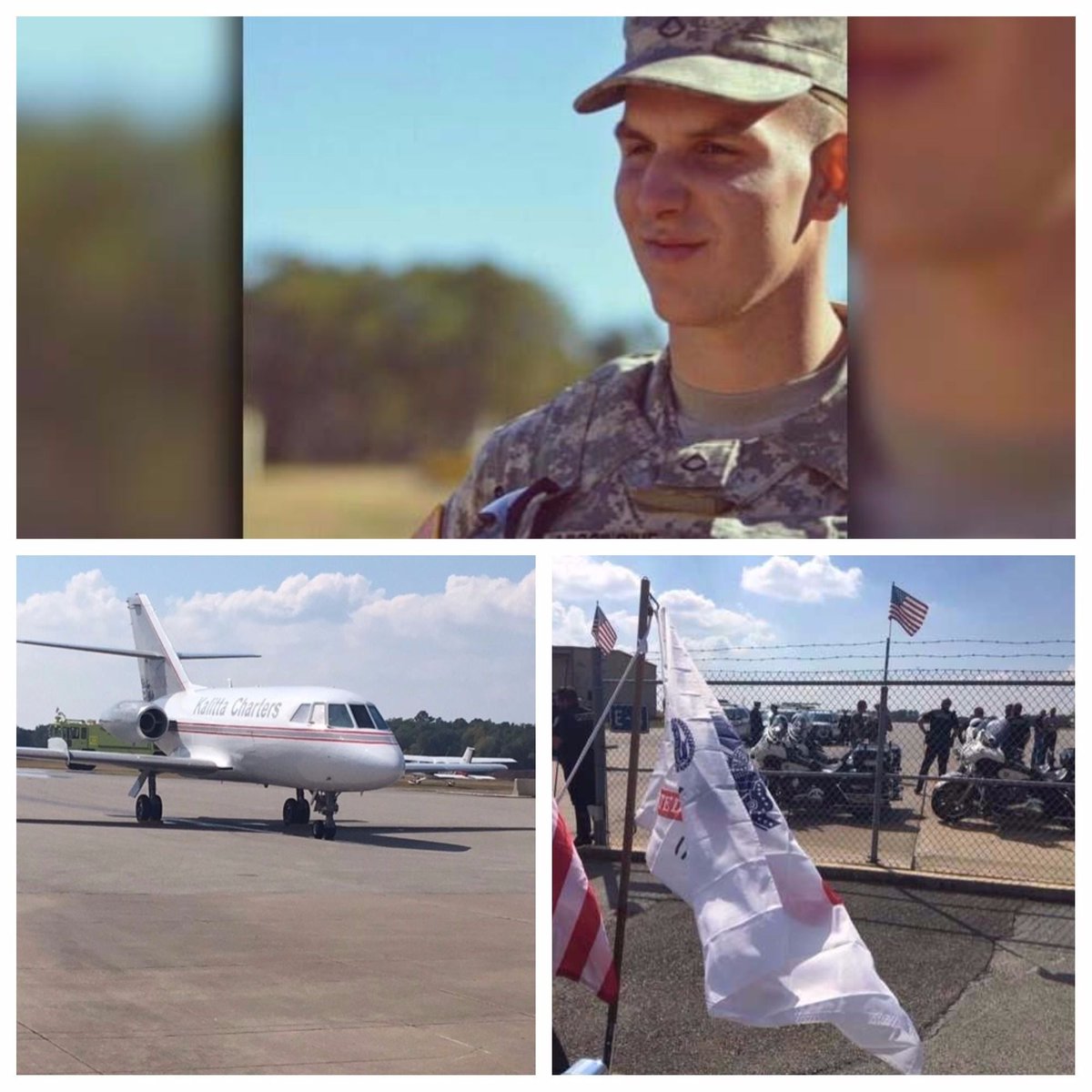 
Meanwhile, a US State Dept spokesperson Tweets the following:

On the violence in #Kirkuk region of #Iraq: We want calm, we want dialogue, we don’t want any violent acts by anyone on any side.
118 replies135 retweets299 likes


An attack is launched by Baghdad and the State Dept looks the other way.  Now they step forward to call for 'both sides' to be reasonable.

They already took their stand -- they stood against the Kurds.


This is because in spite of its meek professions of neutrality, Washington did take a side in this conflict: that of Iraq's central government. But it did more than that by attempting to minimize the role its regional adversary, Iran, apparently played in the reconquest of Kirkuk. The commander of the Quds Force, the foreign expeditionary arm of Iran's Revolutionary Guards Corps, was reportedly instrumental in the Kirkuk operation.
Nothing better illustrates the incoherence of America's stance in the Middle East than the fact that it turned out to be on the same side as Major General Qasem Soleimani, who occupies a status within US intelligence circles somewhere between Professor Moriarty and Darth Vader. He and his proxies are believed by US officials to have caused hundreds of American fatalities and injuries on the battlefields of Iraq.
Yet it's hard to overstate what the Iranian operative has just pulled off. Not only did Soleimani out-marshal and humiliate Washington by brokering a cleverer and more cynical deal, which undercut its own vain attempts at conflict resolution, but he was then rewarded with US legitimization of his scheme. (Iran officially denied any involvement in the recapture of Kirkuk.)
All this occurred less than 72 hours after President Trump heralded a get-tough-on-Iran policy, which included the designation of Soleimani's parent body, the Revolutionary Guards Corps, as a terrorist organization. In his strategy statement, Trump said: "The Revolutionary Guard is the Iranian Supreme Leader's corrupt personal terror force and militia," and he promised, "We will work with our allies to counter the regime's destabilizing activity and support for terrorist proxies in the region." Except the US just did the opposite in Kirkuk and alienated its longest and most stalwart counter-terrorism ally in Iraq, who, as the Kurds like to remind us, have never burned American flags much less attacked American soldiers.


GLOBAL RESEARCH offers a look at Baghdad's reaction to the US.


QUESTION: What’s your response to the statements of Iranian-backed militia figures, like Qais al-Khazali that – and they’re responding to Secretary Tillerson – that it’s the United States who should leave Iraq and not them? And are you concerned now about increased terrorism – Iranian terrorism against U.S. troops, as we saw during Operation Iraqi Freedom?

QUESTION: Okay. Well, despite Secretary Tillerson’s warnings to Baghdad against further aggression against the Kurds, there were another three attacks today. He said in Baghdad – he said to the prime minister that’s it, don’t attack the Kurds anymore. They’ve attacked again. What is your response to those attacks?

MS NAUERT: Yeah. I would say we’re certainly aware of those reports, Laurie. We’re monitoring the situation very carefully, very closely in Iraq. We have maintained, from this podium and throughout the building, in addition to our people who are on the ground working with Iraqi Government officials every single day, also our friends in the north, that we want dialogue. We want calm; we want dialogue. We don’t want any violent acts being taken by anyone on any side.

QUESTION: But do you consider punitive measures if the Iraqis don’t listen?

MS NAUERT: I’m not going to forecast what we may or may not do. I can just tell you that we’ve had a lot of conversations with the Government of Iraq and others as well in the region.

MS NAUERT: Okay. Yeah. Let’s stay on Iraq for now, if we have additional questions on Iraq.

QUESTION: Thank you. So Amnesty International has collected what it calls evidence from satellite images, videos, and witness interviews and victims that tens of thousands of Kurds, mostly Kurds, have been displaced from Tuz Khurmatu in Diyala by Iran-backed – because of the attack from the Iran-backed militias and Iraqi Government. Have you seen that report that came out today from Amnesty?

MS NAUERT: I have not seen the report and I’ve not seen any pictures. So I’m sorry, I’m not going to comment on something that I haven’t seen myself.

QUESTION: And just on Secretary Tillerson’s warning that the Iran-supported militias have to leave the country, do you have a timeframe during which they must leave, or just a warning?

MS NAUERT: I think the Secretary was – was really speaking to what a lot of people are concerned about, and that is Iranian influence in the region but also in Iraq. So that is a concern of the Secretary’s. I think we’ve made that clear in the past and that’s as far as I’m going to go on that.
Okay. Hey, Michelle.

QUESTION: On that same subject, Iraq is one that didn’t seem to be concerned in response to the words that the Secretary used. So what do you think of the way that they framed it, that there are no foreign troops here, that people who are here are just advising and assisting? Does that just add to the State Department’s concern?

MS NAUERT: Well, I think we recognize that there are various groups, that there are Iraqi forces that are – the PMF, for example, that are a part of the Iraqi Government forces, but where there is also an Iranian influence, so that’s something that we fully recognize.

QUESTION: But the fact that – I mean, the Secretary uses such strong words saying that these militias and these Iranian-backed groups need to get out. Iraq doesn’t seem concerned about it in the least. Is that going to be a problem?

MS NAUERT: I don’t know, Michele. I don’t know the answer to that. If – for any additional questions on that, I’d just refer you to the Secretary.

QUESTION: Iran’s chief of staff today said that Supreme Leader Ayatollah Khamenei and Qasem Soleimani had spoiled an American-Israeli plot to create a second Israel in the Kurdistan region.

QUESTION: They said that --


MS NAUERT: I’m not aware of that, Laurie.

QUESTION: But don’t you think that stopping the fighting would be an effective – a good counter to Iranian efforts to extend its influence into – into Kurdistan?


MS NAUERT: We would certainly call for calm on all sides. We talk about that a lot. We expressed a lot of concern about the pending referendum prior to the referendum, the concern that this would back Iraq away from a unified government. That remains a concern of ours and that is being borne out in some of the actions we’re seeing taken in Iraq right now.

And the violence continues.

Blame it on Hayder al-Abadi, prime minister of Iraq.


He really is a little man. 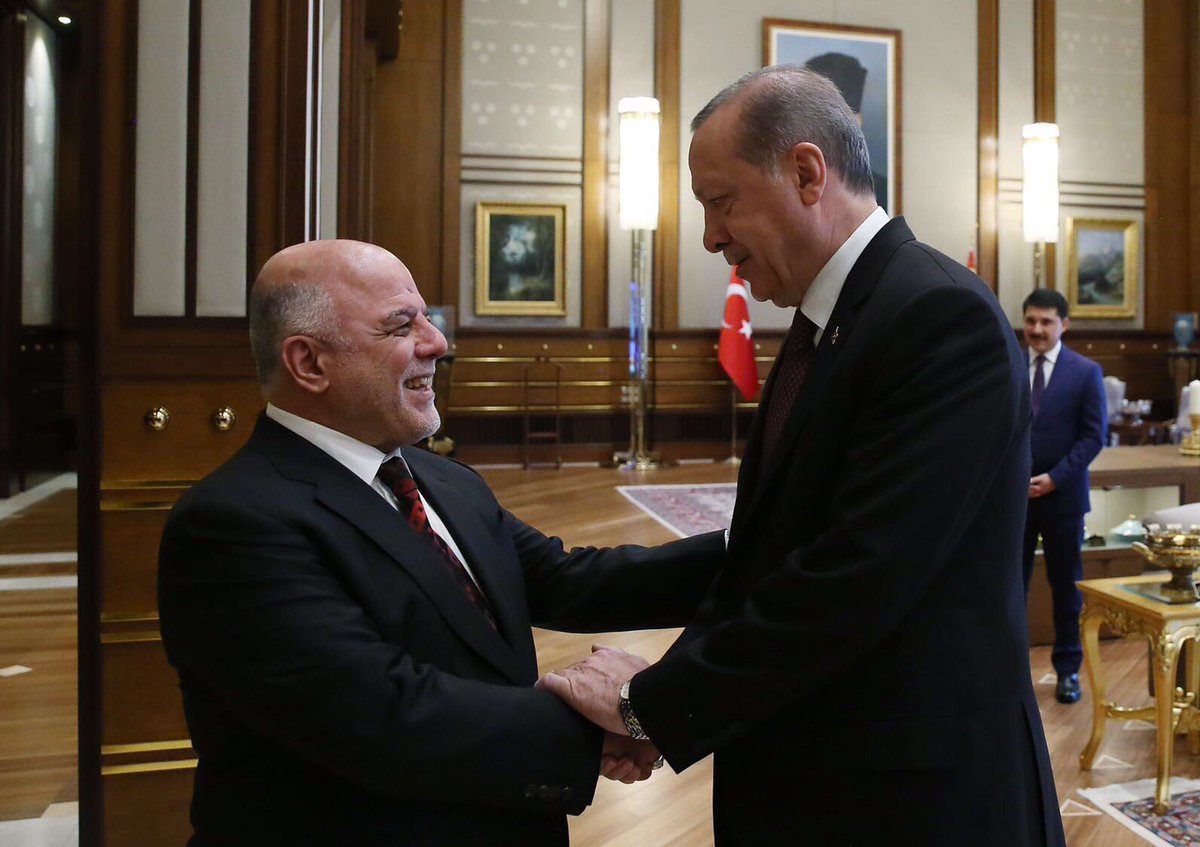 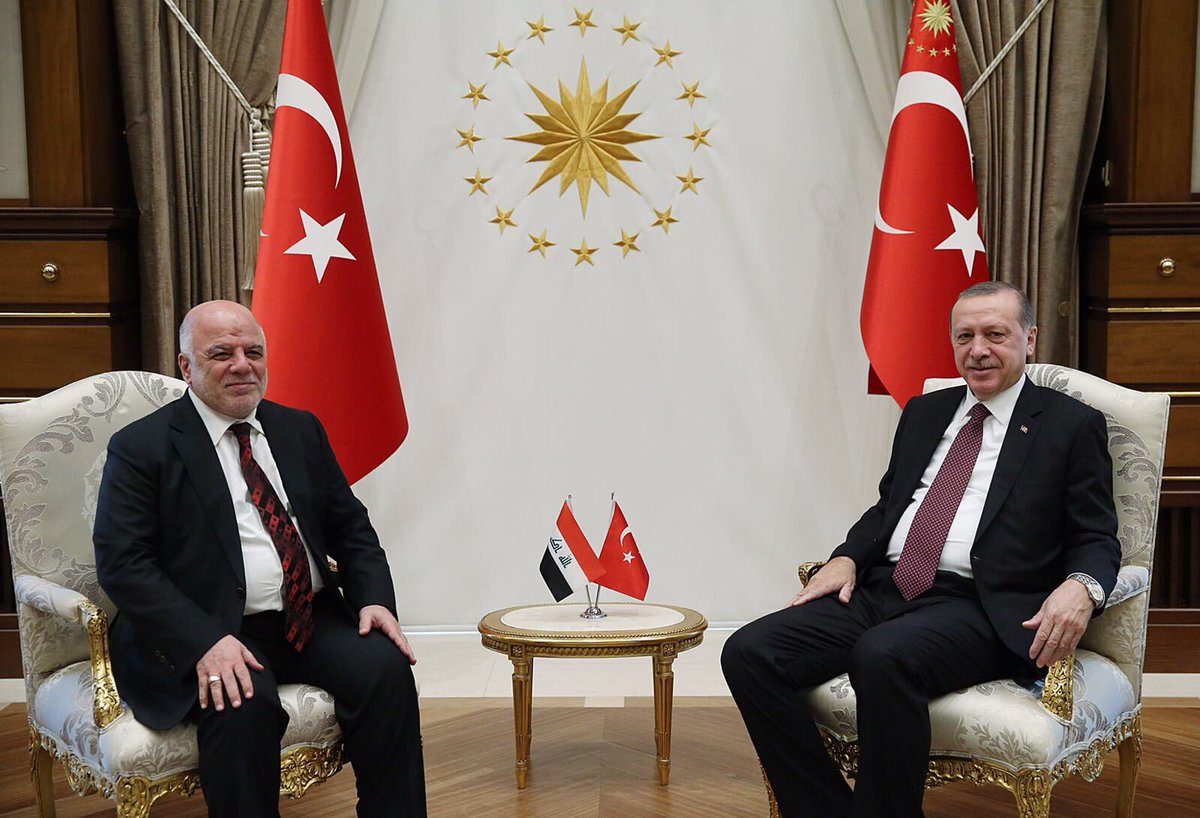 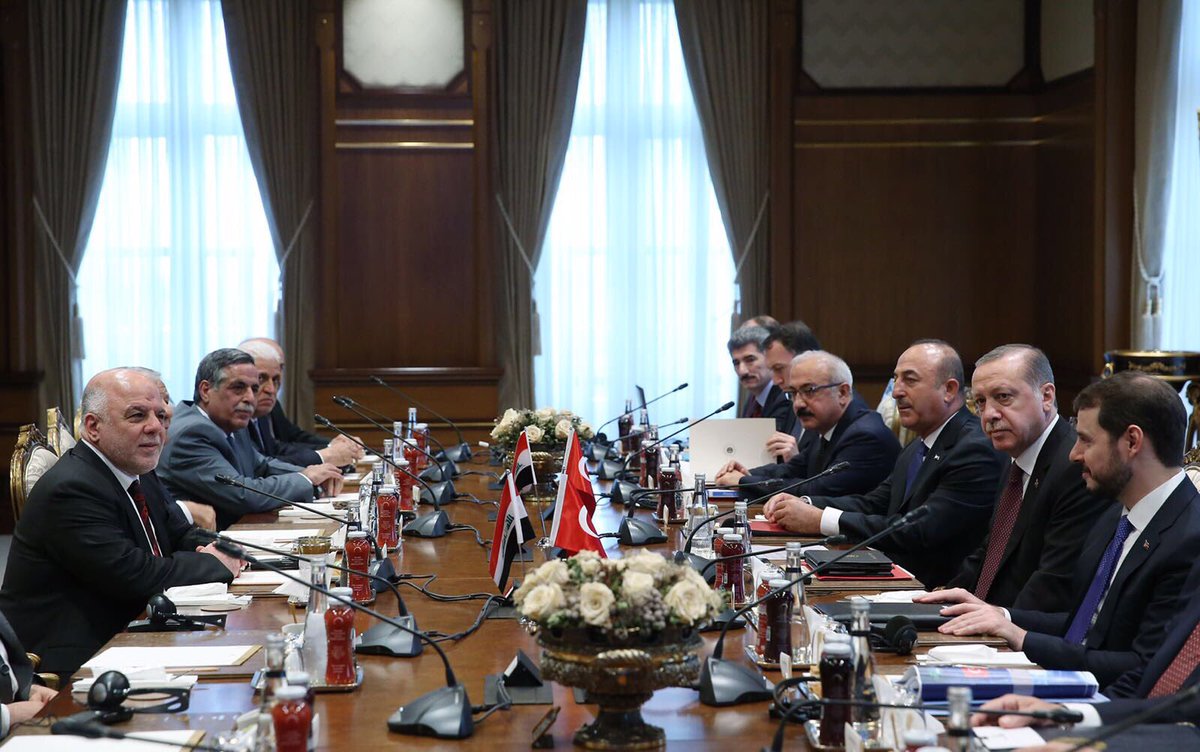 And we're not just talking about his height.

Abadi few months ago:No meeting until all Turkish troops leave Iraq Erdogan: Abadi should know his limit, he is not at my level And today:


The absurd in two sentences: "Trump is a threat.  Therefore, I am retiring."  Jeff Flake, no one knew he was even in the Senate because he never accomplished anything.  Now he's running -- amidst whispers of a sex scandal -- as a means of fighting?