Back on Tuesday, we did these 80s music posts:

There were several songs there that I'd forgotten.  Sometimes, it feels like the 80s was just yesterday and sometimes it feels like it was centuries ago.

Thursday, January 14, 2021.  The Pope gets the COVID vaccine, an Iraqi school is raided by 'security' forces, Donald Trump is impeached and much more 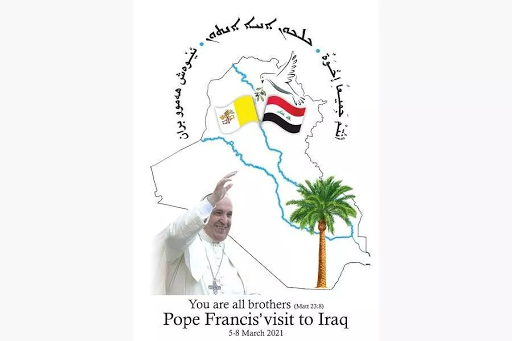 Pope Francis is scheduled to visit Iraq starting March 5th.  If it takes place, it would be the first time a sitting pontiff has visited the country.  The agenda includes visits to Baghdad, Mosul and Erbil.  Hannah Brockhaus (CNA) reports:

More information has been released about the papal visit to Iraq, as Pope Francis expressed doubt this week about whether the trip would take place as planned in March.

In a television interview on Sunday, the pope said that he had canceled two international trips in 2020, “because in conscience I cannot cause gatherings, can I? Now I don’t know if the next trip to Iraq will take place,” he told the news program Tg5.

Meanwhile, local organizers of the visit released on Monday the logo and motto of the visit.

The logo for the trip depicts Pope Francis in front of an outline of Iraq, with the Tigris and Euphrates rivers and a palm tree. There is also a dove carrying an olive branch flying over the Vatican and Iraqi flags.

AFP notes, "Both Pope Francis and his predecessor, former pope Benedict XVI, have received the coronavirus vaccine, the Vatican said on Thursday.  The Argentine pontiff, 84, has previously spoken of the importance of the jab in the fight against Covid-19, which has severely curtailed his own love of being among his flock."  EXPLICA adds, "The Vatican began on Wednesday the vaccination campaign for the about 5,000 Vatican residents and employees."  COVID-19 is what's putting the trip into question.  The Pope is advocating for the shot noting it's safe for the person getting it and that it helps ensure the safety of others.  Mohammed Qureshi Tweets:

In Iraq, the World Health Organization counts 606,416 cases of COVID so far.  And there's more.  Halgurd Sherwani (KURDISTAN 24) reports, "A new suspected case of the COVID-19 variant was detected in the Kurdistan Region’s Duhok province on Wednesday in a person who had returned from the United Kingdom, the autonomous Kurdish region’s health minister said."      Joe Snell (AL-MONITOR) informs:

Iraq is expected to receive its first doses of the Pfizer-BioNTech coronavirus vaccine by February, according to Iraq’s Health Minister on Monday.

Last month, the ministry announced it had signed a preliminary deal with the vaccine makers to import 1.5 million doses by early 2021. Health Ministry spokesperson Saif al-Badr confirmed this week with state-owned newspaper al-Sabah that Iraq’s share of the vaccine is now 8 million doses, enough to cover 20% of the country’s population. Troops, health care workers and the elderly are prioritized for vaccines, Badr had said in December.

Syria is between Lebanon and Iraq.  Lebanon is in the midst of a 24-day lockdown (there's criticism of the lockdown being futile due to the number of exceptions being allowed to avoid lockdown).  Iraq could be next to go into lockdown.  Of more concern is that's taking place in the country Iraq shares a southern border with.  ARAB WEEKLY notes of Kuwait:

Kuwaiti ministers handed in their resignations to the prime minister on Tuesday, the government communications office (CGC) said, days after lawmakers submitted a motion asking to question the premier over issues including the makeup of the cabinet.

The Arab Weekly and three main Kuwaiti newspapers previously reported that Sheikh Sabah was expected to hand in the resignations.

The resignation of the cabinet, formed on December 14, had been expected after the move in parliament earlier this month that posed the first political challenge for the new emir as the country faces its worst economic crisis in decades.

The political turmoil results from the economic crisis that Lebanon is facing.  Iraq?  Devaluing the dinar was only the first step and analysts have been warning for weeks that the poverty rate in Iraq will increase drastically as a result of devaluing the dinar and other proposed options.  Dealing with corruption?  Not an option -- despite corruption having crippled the Iraqi economy.

In March '03, Paul Wolfowitz claimed, “Oil revenues... of [Iraq] can really finance its own reconstruction, and relatively soon.” It's now January 2021 & #Iraq's depressed oil revenues has forced devaluation of the #dinar & has sent the economy spiralling.

Iraq, Struggling to Pay Debts and Salaries, Plunges Into Economic Crisis
Oil-rich Iraq, its economy hobbled by neglect and corruption, has devalued its currency and had its imported electricity cut off for nonpaymen

Iraq is facing many problems -- including a government that does not protect or serve the citizens.  RADIO AL-SALAM Tweets:

Worrying images from #Nasiriyah in #Iraq. The past few days the city is experiencing violent #clashes. They're a lot of injured and detained protestors. People are asking for an improvement of services, protection from the government & are complaining about the economic situation
8:51 AM · Jan 13, 2021

No one is sent to prison for killing a protester -- the cases just pile up, year after year. Sura Ali (RUDAW) reports a new development in the out of control security forces:

Security forces stormed a school in Iraq's southern city of Nasiriyah on Tuesday to arrest a young man believed to have participated in recent demonstrations – leading the Iraqi prime minister to apologize to the school's director for the incident.

"Today, in the Central Secondary School, there was an arrest of a young man who ran away from their hands and took cover in the school," Ali al-Bayati, a member of the Iraqi High Commission for Human Rights (IHCHR) said on Tuesday.

"When they are terrorizing people and violating educational institutions while running after a young man who escaped to the school seeking for protection, we cannot call them a security force, but a terror force," Bayati said.

Mohamed al-Khayat, an eyewitness and activist in Nasiriyah, told Rudaw English on Wednesday that "though the young man was not a student at the school, he was still a teenager”.

The Iraqi Teachers Union in Dhi Qar issued a statement denouncing the incident, saying that "the union was surprised by the security forces arresting a protester in a school, which violates the law and the sanctity of education".

Prime Minsiter Mustafa al-Kadhimi has issued an apology -- but words are so easy for Mustafa, it's action that he struggles with.  Noor Tweets the following to Mustafa:

@MAKadhimi
We call on the United Nations and human rights organizations to immediately intervene to save the lives of protesters in Nasiriyah from armed militias in light of the absence of the state and the militias controlling the security force in Nasiriyah
9:53 PM · Jan 12, 2021

The military and riot police exchanged gunfire during a protest in #Nasiriyah demanding the end of corruption and sectarianism in #Iraq, resulting in at least 1 death on each side as the army worked to protect demonstrators from a rogue police force. https://bit.ly/3skKYra
6:42 PM · Jan 12, 2021

The possible closure has largely been analyzed for its potential effect on U.S.-Iran relations: President Donald Trump tweeted threats of retaliation against Iran should further rocket attacks claim any American lives, and he is reportedly being briefed on a "range of options" for response.

Those implications are significant, particularly given how close the U.S. came to war with Iran a year ago. But also deserving attention is the state of U.S. foreign policy in Iraq itself, where the embassy is located -- and where the United States has been at war for 17 years. Trump's tenure has served to further permanentize U.S. military intervention in Iraq, so much so that the prospect of closing the Baghdad embassy raises more questions about the chance of starting a new war with Iran than about ending the old war in Iraq.

Yes, the Iraq War does continue -- even though CODESTINK, Leslie Cagan and others who made name and money off it -- pretending to protest it -- ignore the ongoing war.

Let's note the war in the e-mails of the public e-mail account for this site.  Incite.

I don't know why you feel the need to lecture me to begin with but I might take you a little more seriously if you didn't repeatedly demonstrate your lack of understanding.

I don't comment on everything here.  I don't pretend to know everything.  When it comes to the law, I know Constitutional law and I know contract law.  (I am trying to deepen my knowledge of oceanic law but that's been a time issue since this site started.)

I was right about?  The SOFA.  I was the only one right about it except for one reporter who doesn't want credit.  People lied to the public which then wanted to repeat the lie.  But I read that contract the day it was published and that same day walked you through it.  I was right.  I was right about the issues in Plamegate as well.

I'm not right because I tune into MSNBC and then repeat whatever over the top statement they and their guest made.

But what I did do was spend a lot of time on my education.  How many Constitutional law classes did you take?  How many moot cases did you argue?  I'm not even an attorney.  I took classes -- undergrad and grad -- that interested me.  I made my own degree plan and it gave me a strong foundation in several areas.

You don't know the legal definitions of incite or sedition.  As you Russia hoxers rush to object and e-mail me, do you realize that the conspiracy you're detailing in your e-mails only exists regarding the whole Russiagate garbage?

I don't think you do and that's your biggest failing.

You can only see your viewpoint.  Maybe there are too may safe spaces?  I can see many sides to an issue.

With Donald Trump, the fact that he's the target (right now) makes many of you thrilled about impeachment.  When it's Joe Biden or someone else facing the same nonsense, see how it works out ofr you then.

"You don't get it, Nancy Pelosi said it was a clear and present danger this week!"

Did she?  Good for her.  I believe I noted that was an argument that could be made when I wrote about impeachment last Friday.  I didn't say you just repeated the words, I said you had to make an argument that backed that up and she didn't do that.  Too much work required and, despite being a legislator, Nancy's never really known the law.

I'm as stupid, a few of you insist, as the member of Congress who was for impeachment but on other grounds.

I don't know who you're referring to.  I'm not following the jawboning over this, sorry.  But if someone objects to impeachment on the grounds that Nancy put forward, they're right.

Test case.  I know that's a term many of you don't know know and may not understand.  You want to test the law?  You get a test case.  Because the law is the law.  And the argument you make better be backed up by the law or you risk being overturned even if you win the first round.

Roe V Wade was a test case.  When Roe later insisted she wasn't raped and had made it up, some insisted Roe V Wade should be overturned.  Problem?  Sarah Weddington and Linda Coffee argued that case before the Supreme Court, they didn't raise the issue of rape.  They made their argument on solid ground because, guess what, they knew the law.  How you argue a case matters.

Donald Trump's been impeached.  I am not surprised as some of the drive-bys insist.  I have said all along that the impeachment would pass the House.

What happens next?  Well they've given Donald a huge amount of power.  I talked about that in the roundtable for the gina & krista round-robin -- should be inboxes right now.  I'll write about it here tomorrow.