Abby Martin‏Verified account @AbbyMartin 2h2 hours ago
In the most impoverished country in the Western hemisphere, Haitians have been protesting for days demanding the ouster of their president, oddly absent from Western media hyperfocused on Venezuela
35 replies297 retweets534 likes

I wasn't sure what I was going to write about but then I saw Larry Johnson had co-written an article.

Do you know Larry?  He used to have a blog, NO QUARTER.  He was very pro-Hillary in 2007 and 2008.  Like many, after that brutal primary (brutal and stolen), he thought Hillary should not go to work in Barack's administration.  As she became a craven lackey, his support for her died.

At some point, something happened and Larry just left.  He stopped NO QUARTER and his Twitter feed.

So it's big news (to me, anyway) that he's back with an article.  This is the opening of the article he co-wrote with William Binney:


The FBI, CIA and NSA claim that the DNC emails published by WIKILEAKS on July 26, 2016 were obtained via a Russian hack, but more than three years after the alleged “hack” no forensic evidence has been produced to support that claim. In fact, the available forensic evidence contradicts the official account that blames the leak of the DNC emails on a Russian internet “intrusion”.  The existing evidence supports an alternative explanation--the files taken from the DNC between 23 and 25May 2016 and were copied onto a file storage device, such as a thumb drive.
If the Russians actually had conducted an internet based hack of the DNC computer network then the evidence of such an attack would have been collected and stored by the National Security Agency. The technical systems to accomplish this task have been in place since 2002. The NSA had an opportunity to make it clear that there was irrefutable proof of Russian meddling, particularly with regard to the DNC hack, when it signed on to the January 2017 “Intelligence Community Assessment,” regarding Russian interference in the 2016 Presidential election:

The phrase, “moderate confidence” is intelligence speak for “we have no hard evidence.” Thanks to the leaks by Edward Snowden, we know with certainty that the NSA had the capability to examine and analyze the DNC emails. NSA routinely “vacuumed up” email traffic transiting the U.S. using robust 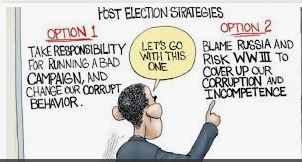 collection systems (whether or not anyone in the NSA chose to look for this data is another question). If those emails had been hijacked over the internet then NSA also would have been able to track the electronic path they traveled over the internet. This kind of data would allow the NSA to declare without reservation or caveat that the Russians were guilty. The NSA could admit to such a fact in an unclassified assessment without compromising sources and methods. Instead, the NSA only claimed to have moderate confidence in the judgement regarding Russian meddling. If the NSA had hard intelligence to support the judgement the conclusion would have been stated as “full confidence.”


I know Ruth loved Larry's work so I will pass on to her that he has an article.  This will be good news to a lot of people.  I hope he's returning to writing with this piece.

That was then.  Today?


We need to stop Elliott Abrams from turning #Venezuela into a nightmarish bloodbath like he's already done to too many countries in his criminal career. Join the global wave of protests Feb 23 to stop another Iraq-style war in Venezuela! #HandsOffVenezuela nowaronvenezuela.org/23feb/
88 replies691 retweets1,250 likes

That really says it all, doesn't it?

She twice ran for president on the Green Party ticket.  She gave speech after speech.  She participated in mock debates.  And where was Iraq in any of her remarks?  She was challenged, in 2012, from one of her biggest supporters to make Iraq an issue in October of 2012, one month ahead of the election, because Tim Arango of THE NEW YORK TIMES has reported on US troops going back into Iraq -- this while Barack Obama was running for re-election on the lie that all US troops out of Iraq.  Jill chose to stay silent.

Now she wants to rally everyone around no-war-on-Venezuela?  Why should anyone care?

If protests break out in the US what would it even matter?

It would make a damn difference.

Because Jill, Medea Benjamin, Norman Solomon, Amy Goodman -- go down the list.  All these fools have made clear to the US government that if you threaten war, we will oppose you . . . briefly.

Shame on Jill Stein.  The Iraq War hits the 16 year mark and if she even bothers to note that ongoing war, it's just to make it a reference point.  It's not to call for an end to it.


When an Elliott Abrams tells a president that war will be easy, he can point to what's happened with Iraq and say, "Don't worry, they protest now, but in a few months, these gadflies will have flitted elsewhere."

And, sadly, he won't be wrong.

Where is the accountability?

And that's why the Iraq War continues.


The violence didn't stop.  The war never ended.  The US government continues to control Iraq.  The Iraqi people are overruled and pushed aside repeatedly.  It's an occupation.  But don't worry, we have brave voices speaking out in the US . . . somewhere, right?

There is no follow through.  Our so-called leaders are too busy thumbing rides on the Highway of Causes, rushing from one to another, to have any follow through.

A deployment ceremony will be held in Hammond on Saturday, Feb. 16 at the Army Aviation Support Facility #1 at 10 a.m.

Governor John Bel Edwards is expected to attend to honor the more than 50 soldier from the Hammond area.

IraqiSpringMC‏ @IraqiSMCEn 19h19 hours ago
Activists: US military vehicles are shown in the vicinity of the city, "Samarra" north of Baghdad, under the protection of a private security company. . facebook.com/iraqispringmc/… facebook.com/IraqiSMCEn/pos…
0 replies0 retweets0 likes

At least 100,000 babies are dying every year as a result of wars according to a new report by British charity Save The Children.
The report estimated around 420 million children - nearly one in five of the global population - were living in conflict-affected areas in 2017.
This figure is up from 390 million the year before.
The research, carried out by the Peace Research Institute Oslo for Save the Children, found the number of children living in conflict zones is now double the number at the end of the Cold War.
The ten countries hit the hardest are Afghanistan, Yemen, South Sudan, the Central African Republic, the Democratic Republic of Congo (DRC), Syria, Iraq, Mali, Nigeria and Somalia.


The US-installed government in Baghdad continues to fail the Iraqi people.


Activists posted a video showing the reality of health and service deterioration in the hospital of "Zubair" in # Basra under the high budgets allocated to the Ministry of Health. . facebook.com/iraqispringmc/… facebook.com/IraqiSMCEn/pos…
0 replies0 retweets0 likes

If you live in Basra, you face no jobs, water that can put you in the hospital if you drink it and a government that feels no need to address your demands.

This girl from the Basra protests last year: "Our rights [or the truth] will not be lost, so long as we continue to demand them."


Which is why protests started in July and continue.

Let's wind down with this from Senator Kirsten Gillibrand's office:

At Hearing Focused On Horrible Living Conditions In Military Housing Across The Country, Gillibrand Questions Executives Of Companies Responsible For Toxic Mold, Lead Paint, And Pest Infestations In Homes Of Military Families

***Watch SASC Joint Subcommittee Hearing Video HERE***
Washington, DC – At a Senate Armed Services Joint Subcommittee on Personnel and Readiness and Management Support hearing, U.S. Senator Kirsten Gillibrand, a member of the Senate Armed Services Committee and Ranking Member of the Subcommittee on Personnel, questioned leaders of private housing companies on their failure to provide safe living conditions and meet maintenance needs in the homes of military families across the country. According to a recent survey, more than half of military families living in private housing had a “negative or very negative experience.” Military families reported serious issues such as toxic mold, lead paint, and pest infestation in their homes, which have resulted in health problems for military children.

“Let me begin by reiterating how frustrated I am by the experiences of the families we have heard from today who live in houses under the management of your companies,” Gillibrand said to the housing executives testifying at the SASC hearing. “In choosing to participate in the Military Housing Privatization Initiative, your companies didn’t just land another real estate deal – you assumed responsibility for the safety, health, and wellbeing of military families who make incredible sacrifices each and every day in support of our national defense…In so many of the stories we’ve heard today from military families, the maintenance procedures you’ve put in place have failed to ensure quality in housing units.”

Below are the questions that Senator Gillibrand asked private housing executives during the hearing: