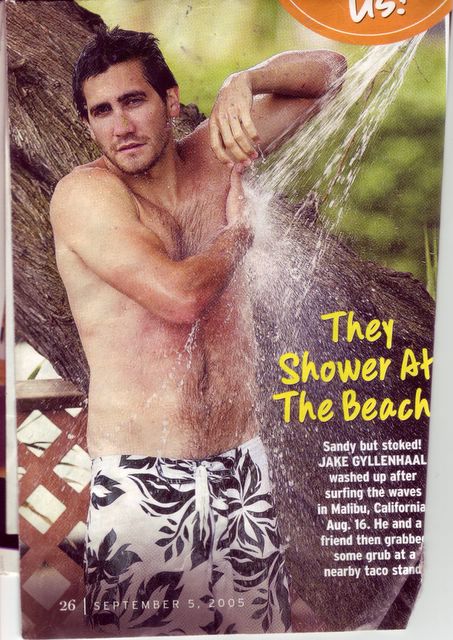 To the left is Jake Gyllenhaal, the actor. Rebecca has the photo posted at her site and comments in her year review for 2005 so check it out. (It's a big photo at her site.)

I really enjoyed Rebecca's look back at 2005 and I think you will as well so make sure to check it out.

I have a thing on music that will be going up at The Common Ills. I had a post I was working on for tonight but Gina's computer fried and she lost a good chunk of today's gina & krista round-robin so when she called last night, for computer advice and I was no help, I told her she could have the thing I was working on and run that if it would help any.

I had an e-mail, that I hope was a joke, suggesting that I write more. This site is just a jot. In fact Wally's The Daily Jot should have more up than I have here. What I mainly do online is note albums. The Common Ills had some new stuff by me last Friday, Saturday and Sunday --

Carly Simon's No Secrets, James Blunt's Back to Bedlam and Bright Eyes' Motion Sickness. This site is more for thoughts I have about a CD that's not sparking a full length review. That could mean that I don't care for the CD. But that's usually not the case. I just may not feel that I have anything to say that hasn't been said over and over. I'm not like Bernie trying to dig the same grave repeatedly.

I also usually help out with The Third Estate Sunday Review. Due to Christmas, I wasn't able to last weekend. But they put out a wonderful edition which included Ava and C.I.'s the year in TV news, a great editorial, a DVD review of Wal*Mart: the high cost of low price, a roundtable featuring Ruth (who doesn't always have time to participate but when she does she adds a great deal) and a hilarious parody of my "friends" Bernie and Christine.

Lynda e-mailed that what should be said to Bernie and Christine can be found in Cass Elliot's "Burn Your Hatred" which I noted back in August:

I've had my say and now I'm through

I've just got to get myself away from you

Because of all the dark I find inside of you

Burn your hatred out on someone else

You can find Cass' song on The Solo Sessions 1968-1971 and it's certainly worth purchasing that double disc CD.

In 2006, we don't have time to waste with crowd suffering from "War Got Your Tongue" who shouldn't be allowed to leave the kiddie table because they're unable to address adult concerns. Let those types shine it on for TV shows that promote a young woman crying rape falsely. Let them be as simple minded as they want to be.

But let's find our brave voices because they are out there and we need to embrace them.

Rebecca and I were talking about The New Republic and it's ilk. They are as damaging as the right wing echo chamber because they too shift the country to the right. Pretenders and posers and cheerleaders for the war should not be allowed to be on NPR or the networks representing the left. They are not the left.

Rebecca noted this from The Nation Wednesday:

NADER'S 'UNSAFE' AT 40 William Greider writes: Ralph Nader and dozens of old friends got together recently to celebrate the fortieth birthday of a book -- Unsafe at Any Speed, his auto industry expose. It has its origin in "The Safe Car You Can't Buy," which first appeared in The Nation in 1959. The book was the starting gun for the consumer movement and, much more, for citizen activism. At the gathering Nader introduced some early collaborators -- Village Voice columnist Jim Ridgeway, who wrote a riveting account of Nader's campaing in the then-liberal New Republic, and publisher Richard Grossman, who created a hard-hitting genre known as "Nader books." Some of his young deep-digging associates described their work in what is an ongoing fight. The old crusader, we are pleased to report, has not mellowed.

There is a very limited number of "seats" available for the left in the mainstream media. It's past time that The New Republic and their ilk were ejected from occupying seats that are supposedly reserved for the left. We won't get Laura Flanders, Ruth Conniff, Katrina vanden Heuvel, Medea Benjamin, Arundhati Roy, Amy Goodman and other strong voices on the left into the mainstream if their seats are taken by war cheerleaders from a magazine that hasn't been liberal in decades now.

It's past time that the Mark Shields-type pundits and guests were not allowed to represent the left. We won't get our message out by those who play left in the mainstream media.

I want to be really clear here because these types do not represent the left anywhere but on TV. They are part of the gatekeeping system. The New Republic has a shoddy circulation rate. There is no reason they should be on TV at this point when, to name two publications, both The Nation and The Progressive outsell them. But they're dubbed "left" by the Cokie Roberts crowd and they take our seats. That needs to stop in 2006.

Polling shows that the country didn't move to the right on abortion but to watch TV you'd think it had. One of the longest struggles in our nation (globally as well) has been feminism. The struggle continues and that's fine. There will always be strong women to strive for a better world. What's not fine is losing ground. Next month is the thirty-third anniversary of Roe V. Wade (Januaray 22nd).

In the roundtable (at The Third Estate Sunday Review), they went over various issues for the year 2005. Here's one section:

Elaine: Good pick. But one issue that came up over and over in 2005 was the attack on reproductive rights. They, the right-wing, were even willing to use Terry Schiavo, a comatose woman, as a pawn in their efforts to remake the landscape. We're not supposed to question the Bully Boy's nominees on reproductive rights because that's apparently a "specialized" issue and not a "universal" one despite the fact that women's health has a huge impact on the nation. We're in the work force and we have some insurance plans that recognize a much smaller range of health options for us than they do for men. Certainly as the ones who give birth, our health impacts children. Equally certain is that with the number of working mothers, health isn't just an health issue for the nation, it's an economic one that incomes both families headed back single parents and those headed by parents where at least one is female and she works. The assault includes an attack not only on abortion rights but also on birth control and upon our right to know about our options. The Justice Department no longer includes information on emergency contraceptives in the information given to rape victims. So this was one of the important issues in 2005 as the right turned up the attacks on reproductive rights and the press largely tended to treat each attack as unconnected when there is a pattern and a framework to these attacks. Ruth: I'll add to that my own disappointment because I'm old enough to remember Roe v. Wade becoming law and how monumental that day seemed. Now it seems that the organized efforts on the part of a few to overturn it will come to fruition. It's very depressing.

It is very depressing. But these are depressing times and 2006 should be the year that we find a way to be more vocal, more active.

Sometimes it takes realizing how much is at stake to motivate us. With the Bully Boy spying, lying and destroying the planet, maybe we're really willing to roll up our sleeves and fight in 2006? Let's hope so.

sex and politics and screeds and attitude