Margaret Flowers is the wife of my BFF Kevin Zeese.

This is from her COUNTERPUNCH article:

At the start of the August congressional recess, Senator Bernie Sanders announced that he will introduce a senate bill this September “to expand Medicare to cover all Americans.” Since the election, the movement for improved Medicare for all, has been urging Sanders to introduce a companion to John Conyers’ HR 676: The Expanded and Improved Medicare for All Act, which currently has a record 117 co-sponsors in the House and is considered the gold standard by the movement.
Recent reports are that Sanders’ bill falls far short of HR 676 in fundamental ways. In fact, Sanders’ bill is a multi-payer system not a single payer system. His bill reportedly would allow private insurers to compete with the public system, allow the wealthy to buy their way out of the public system and allow investor-owned health facilities to continue to profit while providing more expensive and lower quality health care.
As a leader in the Democratic Party in the Senate, Sanders is trying to walk the line between listening to the concerns of his constituency, which overwhelmingly favors single payer health care, and protecting his fellow Democrats, whose campaigns are financed by the medical industrial complex. Sanders needs to side with the movement not those who profit from overly expensive US health care.

And let's note this that Margaret reTweeted: 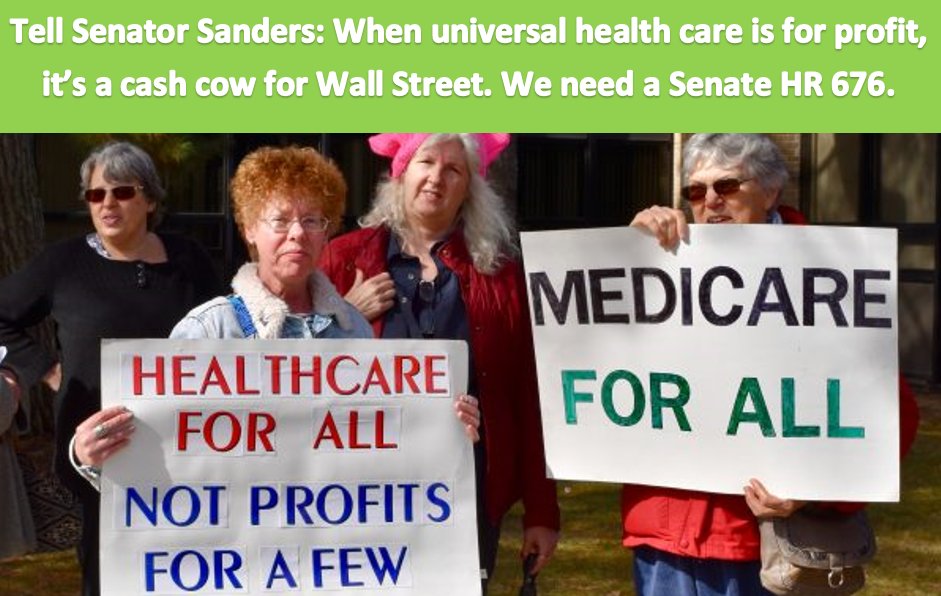 
Margaret's right, we need Medicare for all.

Bernie needs to introduce a compliment to John Conyers' bill, not something different.

Perhaps it would have meant more if the US spokesperson Ryan Dillon hadn't grabbed the pom-poms yesterday and rushed over to FRANCE 24 to declare victory?

THE NEW ARAB offers this on the battle:

It would also appear that IS fighters did not number anywhere close to the 2,000 militants claimed by Baghdad. According to after-action reports and statements issued by counter-terrorism units, the Iraqi military had slain some 225 IS militants, while the Joint Operations Command revised that figure upwards to 302. It is therefore becoming increasingly clear that IS did not fight with anywhere near the ferocity that they summoned for the Mosul battle, and had likely already conducted an operational withdrawal, ceding ground to the Iraqi military.


This is likely due to IS having focused much of its military might in the fight for Mosul, and IS may well be conserving its manpower in order to conduct more conventional insurgent attacks – car bombs, suicide attacks etc - that are cheaper to conduct, and cost less in terms of human resources too.

I guess some -- possibly the slower-witted ones -- might see that as something to be proud of.

IOM Iraq‏Verified account @IOMIraq  21h21 hours ago
Although the military operation in #TalAfar was brief, it displaced 1000s more #Iraqis


The Norwegian Refugee Council sketches out the sad details:

More than 3 million people are currently displaced by conflict across Iraq – a third coming from Tal Afar or Mosul during the last nine months. While many have returned to east Mosul, many of those from the west say that they have nothing to go back to. Although the military operation in Tal Afar was brief, it displaced over 40,000 people since April.
As the current conflict in Iraq diminishes, it is predicted that as many as 1.5 million people in Iraq will return to their homes over the next six months. However, any person’s return must be safe, voluntary and dignified. This can only happen with comprehensive plan from the government of Iraq.
“We can’t go back unless the government allows us to - a lot of homes are booby trapped and there are IED (improvised explosive devices) and mines everywhere,” said Mehmoud Mustafa, who fled Tal Afar with four other members of his family. “One of our family members was arrested … and we have no idea where he is now, so we want to wait for the family to be together again.”
“There are almost no services where we come from, and no food and water and things that we need to get by,” said Sami Salih, from Tal Afar. “We also need to be allowed to return to our homes by the government and military forces. So we will go back when I have enough money and something to go back to. Now we have nothing left of our properties.”
One third of Iraq’s population, 11 million people, need humanitarian assistance. Yet, only 43 per cent of the US$ 985 million total funding target has been provided this year.

“It will take a long time and a lot of resources to rebuild the cities, towns and villages that have been damaged and destroyed by this conflict. People cannot even begin this process unless they are safe. Once they are, people must be free to move when and where they choose so they can start the journey of rebuilding,” said Diedrich.


This is in a country already torn apart by years of war, a country of widows and orphans.

There are approximately 11,000 US troops in Afghanistan Tom O'Connor (NEWSWEEK) reports noting:

While the Pentagon did offer a troop count in Afghanistan on Wednesday, it declined to release the same figures for Iraq and Syria, where more than 7,900 U.S. troops may be battling ISIS alongside local partners, according to a report published last week by The Military Times. The Pentagon reports only 5,765.
In Iraq, the U.S. supports the Iraqi military and Kurdish allies mostly through airstrikes but also with special operations forces. The Pentagon maintains that 5,262 U.S. soldiers are in Iraq, but defense officials have reportedly said that number is as high as 7,000. Second only to Afghanistan, the U.S.’s lengthy military presence in Iraq since 2003 has irked officials in Baghdad and served as a point of support for neighboring Iran, which funds powerful majority-Shiite Iraqi militias opposed to both ISIS and the U.S.

Today's August 31st, the end of the month.  September is supposed to bring a referendum on independence in Iraq -- for the KRG and Kirkuk.  That referendum is scheduled to be held September 25th.

RUDAW notes some of the opposition to it:


Shiite and Sunni political leaders have expressed their opposition to Kirkuk Provincial Council’s decision to participate in the Kurdistan independence referendum.

Nouri al-Maliki, Iraqi vice president and influential Shiite leader, said the inclusion of Kirkuk in the upcoming referendum will pave the way for increased crisis and perhaps fighting between various groups in the region.

The former Iraqi PM who still wields immense power in Iraq described the decision by the Kirkuk Provincial Council to participate in the independence referendum as a means to “undermine hopes" of finding a solution to end the crisis in the region.

The Kirkuk Provincial Council voted on Tuesday – upon a call from the Kurdish-led Brotherhood faction – to take part in the vote.

On September 25, the Kurdistan Regional Government (KRG) in Iraq will hold a referendum to become an independent country. Iraqi Kurdistan is an island of democracy and tolerance in the Middle East. It is also a steadfast military ally of the U.S.; its Peshmerga forces have supported U.S. efforts in Iraq as far back as 1990 and have recently led the campaign against the Islamic State. (The KRG’s population has swelled by a third since 2014 as the government welcomed refugees fleeing ISIS’s brutalities.) Iraqi Kurds want their own free country, but the U.S. government is unenthusiastic about the bid for independence.

Why? The State Department admitted in June, “We understand and appreciate the legitimate aspirations of the people of Iraqi Kurdistan.” But that affirmation of Kurdish ambitions was prefaced with a worn-out phrase: “support [for] a unified, stable, democratic, and a federal Iraq.” In other words, the Trump administration is maintaining the longtime U.S. position that the fate of the Kurds needs to be worked out with Baghdad. It’s understandable on some levels that the U.S. views Kurdish independence as an internal Iraqi matter—especially since neighboring Turkey, a U.S. ally (albeit an inconstant one), clashes with its own Kurd population and would do almost anything to prevent an independent Kurdish state from forming on its southern border. But the simple fact is that the administration’s current policy is based on fantasy: The “unified, stable, democratic, and a federal Iraq” at the core of its position towards the KRG does not exist, and will not exist in the near future. It a pipe dream lost to the reality of Iranian dominance.

[. . .]
If the U.S. doesn’t change its position to support an independent sovereign KRG, the Kurds will proceed ahead no matter what, and the U.S. could lose its close working relationship with one of its best allies ever. We would appear ungrateful and disloyal. And there is no upside for the KRG to wait. The region is not likely to be suddenly becalmed and booming with economic growth. The KRG is motivated to look after itself. The Iranians are unlikely to slow their inexorable and creeping takeover of the Iraqi economy and political systems. That’s not to say it is “now or never” for KRG independence, but the threat of implicit Iraqi oversight of KRG internal and financial matters, combined with decades long aspirations and possession of one of the most seasoned and effective fighting forces in the region align in the direction of an exit.

Of course, Recep has many other things to worry about.  For example, Josh Delk (THE HILL) reported earlier this week:

A grand jury has indicted 19 defendants, including 15 Turkish security officials, over charges stemming from a violent attack on protesters outside the Turkish embassy in Washington, D.C., in May.
The indictments before the Superior Court for the District of Columbia were made public on Tuesday by the Justice Department.


Poor Recep, if his security guards continue to attack peaceful protesters, will countries have to start blocking his visits?


And we'll close with this from WSWS: