And you wonder why people are tired of the duopoly

If so, note this:

Dr. Jill Stein 🌻‏Verified account @DrJillStein 9h9 hours ago
Democrats & Republicans reached across the aisle today to continue #FISA warrantless spying on Americans. The bipartisan "war on terror" is shredding your rights & pouring gas on the flames of terrorism, but at least their campaign funders are getting rich off your tax money.
45 replies566 retweets838 likes

It's why we need so much more than we have today.

The duopoly has done neither.

Thursday, January 11, 2017.  Iraq is hit by multiple earthquakes, Hayder takes a second bride, USA TODAY doesn't call for an end to wars but they call for sight seeing, and much more.


AP reports that the 10th Mountain Division Headquarters of Fort Drum will be deployed later this year to Iraq.  This news coming in the same week that another US service member is killed in Iraq (the 22nd since August of 2014), Spc Javion Shvonte Sullivan.

Javion leaves a wife, Rayven, and daughter, Mahogany, 3, his family said.
“He was not only our hero, he was the community’s hero and the country’s hero,” said Cynthia Sullivan, Javion’s mother. “He knew the sacrifice that could come with his decision. I take solace in that he had a passion for service, for the military, for his country.”
Cynthia Sullivan, who still lives in Indian Land in Lancaster County, said that she “begged” her son not to enlist, but he told her that was what he wanted to do and must do to serve his family, community, and country.

Sullivan’s family says he enlisted in the army in 2015 and left for his first deployment in September.
“I knew in my heart,” Cynthia Sullivan, Javion’s mother said. “I knew the end result. I just knew it.”

She said she begged and pleaded with her son to not enlist but says it didn’t take long to see that was his passion.


Don’t forget this local hero. He was the first American soldier killed fighting ISIS this year. Javion Sullivan leaves behind a wife, a daughter and a legacy at Fort Mill High School. Story: bit.ly/2qNzj8A @wsoctv

hs wrestling coach at ft mill high speaks about his memories of 24-year-old spc javion sullivan. sullivan wrestled as a senior. authorities say he was stationed in texas and was died in iraq from a noncombat incident @FOX46News

Javion "Jay" Sullivan, was killed in Iraq. The incident happened Monday 1/8. The 24-year-old had been stationed in Fort Hood, TX before his recent deployment to Iraq. May His Memory Be Eternal

US Army Specialist Javion Shavonte Sullivan of @2SigBde dies in Anbar province in a 'non-combat' incident. He is the first announced death of a US soldier in Iraq in 2018 supporting @CJTFOIR (

Meanwhile the country shattered by war is hit by an earthquake.

A series of 8 earthquakes hits the Iran-Iraq border area and rattles even Baghdad and parts of the Iraqi countryside: cbsn.ws/2mqfMGw

RT reminds, "The region was rocked by a devastating quake last November, in which more than 400 people were killed and around 6,700 injured."  AP adds, "Geophysicist Randy Baldwin told The Associated Press on Thursday that such quakes should be expected in the region after the November 7.2 magnitude temblor." 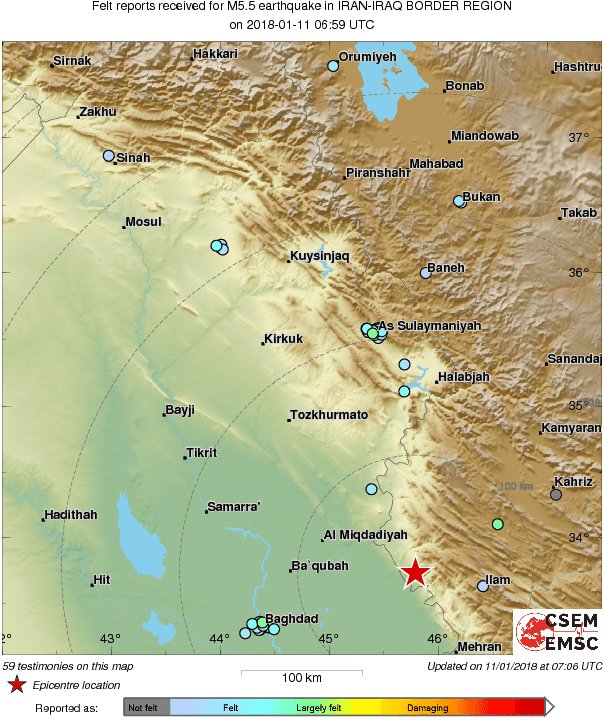 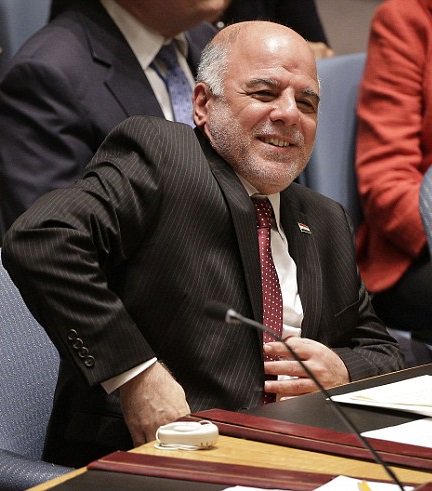 I didn't even know that Hayder and Nouri al-Maliki were engaged!  For those wishing to send gifts, I understand the wedding registry is with Lockheed Martin.


Hayder's eager to win the elections this May and is running on the claim that he saved Iraq.  Strangely, many of the areas 'saved' don't look that way.


Responding to the news that the Iraqi Parliament voted to establish a multi-ethnic committee to investigate events in the city of Tuz Khurmatu, 65 kilometres south of Kirkuk, Lynn Maalouf, Director of Research for the Middle-East at Amnesty International said:
“The establishment of this committee is a welcome step, which not only could be a step towards securing justice for victims of violations in Tuz Khurmatu, but also should serve as a deterrent against future violations and abuses.
“On 16 October 2017, tens of thousands of civilians were forced to flee their homes after fierce clashes between Iraqi forces, supported by the Popular Mobilization Units (PMU), and Peshmerga forces. Hundreds of homes and shops in Kurdish-majority neighbourhoods were looted, set on fire, and destroyed. Within minutes, thousands of people lost their homes, shops and everything they owned.

The Iraqi government must ensure that the investigation conducted by the committee is thorough, effective and transparent

“The Iraqi government must ensure that the investigation conducted by the committee is thorough, effective and transparent, that the victims receive full reparation, and that the findings of the committee are released publicly. Evidence of individual criminal responsibility should be referred to the judiciary for possible prosecution.”
“Displaced families have been living in fear for months, not knowing whether they will ever be able to go back home. Authorities must move quickly to hold perpetrators accountable and ensure the safe return of families to Tuz Khurmatu.”
Background:
Amnesty International was one of the first organizations to conduct an in-depth investigation of the violations that occurred in Tuz Khurmatu on and soon after 16 October, when Iraqi forces supported by the Popular Mobilizations Units (PMU) took control of the city.
The UN followed up by undertaking two monitoring missions to Tuz Khurmatu on 7 and 14 December.


The biggest effects, of course, were on Iraq itself. Death counts range from the hundreds of thousands to the millions. Government is precarious. Daesh and other forces have run rampant. Basic services like electricity have barely worked, in an oil-rich country.
However, the unparalleled scale of outrage at the invasion reflects not just the terrible results but also the mendacity of the men who led the invasion. Few wars in history have been so textured by lies, misinformation and wacky racial stereotypes. Saddam Hussein, of course, had no weapons of mass destruction, and US-UK leaders showed no willingness to let inspectors do their job. It was obvious that UN resolutions were a fig leaf for an invasion motivated by the oil companies that dominated Bush’s White House.
Today, the Chilcot Report is an establishment stamp on the anti-war movement’s version of events. Yet, tragically, the leaders who took us to war have never known justice. They earn millions from corporate engagements, speaking fees and book sales. They are still cited as legitimate commentators on Brexit and Trump. Worst of all, Tony Blair has been employed as an expert on Middle East peace, which is like hiring Donald Trump for his insights on women’s rights.
This March will be the proper 15th anniversary of the Iraq invasion. We must make a big deal of it. There’s a danger that millions of politicised young people are growing up without the lesson in state power and imperialism that my generation received. It’s our duty to pass that knowledge on. With Trump in the White House, it’s best to prepare for the worst.

Gregg Zoroya (USA TODAY) whines that US President Donald Trump has a "duty" to visit the troops.  No, his duty should be to withdraw every last one of them from Iraq.  In eight years as president, Barack Obama went to Iraq once.  This from the candidate who campaigned on ending the Iraq War.  Remember that promise?  Remember how the illegal war continues?  And that 22 US service members have died in this war since August 2014 alone?

The duty is to end wars.