NASHVILLE was only one of the classic films she made, she also starred in Alfred Hitchock's last film FAMILY PLOT. 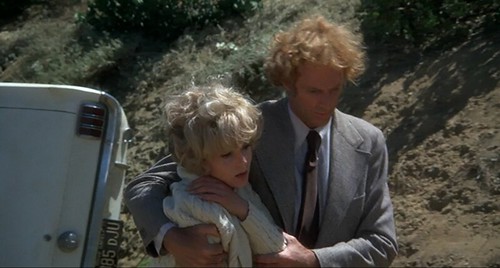 That's her with Bruce Dern.   He Tweeted:

Bruce Dern‏Verified account @BruceDern 5h5 hours ago
With the passing of Barbara Harris today, our generation lost its true female comic genius and a girl for the ages. #RIPBarbaraHarris #familyplot
0 replies9 retweets35 likes

With Jodie Foster, she starred in the original FREAKY FRIDAY.

With Elaine May, Harris was one of the leading female lights of the Chicago comedy scene, and was among the founders of the improv style that the group would make famous. According to the official Second City website, Harris was one of the original Compass Players, along with her then-husband Paul Sills, May, Mike Nichols and Ed Asner.
As an original Second City cast member, Harris was the first performer of the first show, singing “Everybody’s in the Know” on Dec. 16, 1959.
Harris transitioned to a major acting career, first on Broadway, where she earned a Tony nomination for her debut in From the Second City (her co-stars included Alan Arkin and Paul Sand) and then again for 1965’s On a Clear Day You Can See Forever. 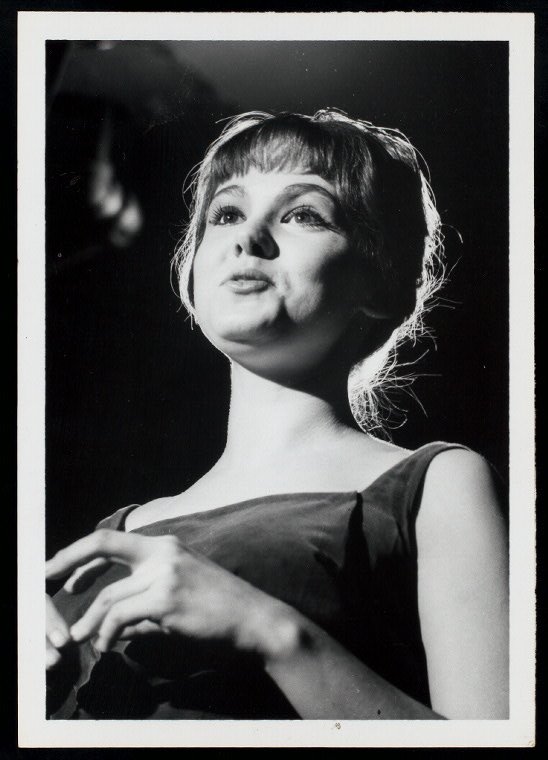 James Woods‏Verified account @RealJamesWoods 1h1 hour ago
In my early years in New York, Barbara was one of my dearest friends, just a real pal. She was a truly unique individual, and a mammoth talent. This truly breaks my heart. I wish I had known where she was. She had no surviving family. #RIPBarbaraHarris http://www.foxnews.com/entertainment/2018/08/21/nashville-and-freaky-friday-star-barbara-harris-dead-at-83.html …
138 replies342 retweets1,796 likes

In his early years, he also played Barbra Streisand's college friend in THE WAY WE WERE (that was just on TCM this weekend).

Bill "Jett" Ramey‏ @BATMANONFILM 8h8 hours ago
When I was 11, FREAKY FRIDAY blew me away! I love that movie and it's still the best version of kid/parent swap, period. Godspeed Barbara Harris, you were the best thing in an awesome movie! 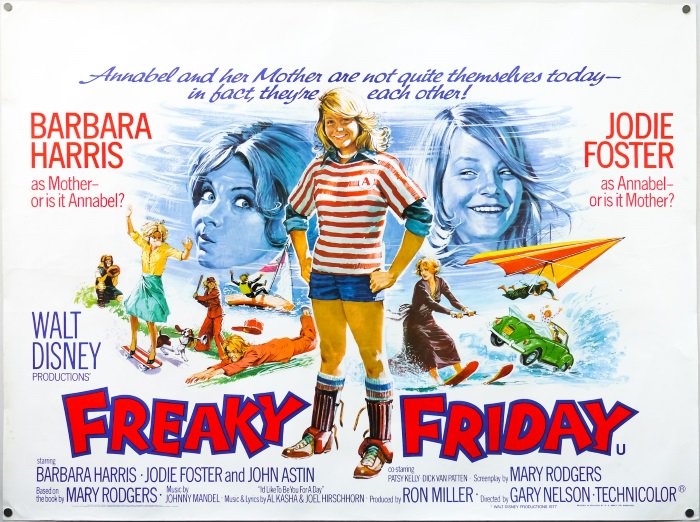 
No Tweets note my all time favorite Barbara Harris film -- again, TCM needs to be noted, they have kept that film alive.  SECOND-HAND HEARTS.  She works as a waitress (in a kind of honky tonk) and ends up married to a drunken Robert Blake.  Then she and him and her children (who they pick up) end up in a station wagon driving to California to try to build a new life.  Her character is a shade demented but very determined and it's a cute movie.  It's a road movie with some really great shots including this old woman's place that she and the kids are at.

An American service member died in the crash, and several others were injured.
“The aircraft was conducting a partnered counterterrorism mission against [the Islamic State of Iraq and Syria] in support of Operation Inherent Resolve,” Manning said.

OIR Spokesman‏Verified account @OIRSpox Aug 20
Our heartfelt condolence to the family of @CJTFOIR service member who died in a helicopter crash in #Iraq last night. While the incident was not a result of enemy fire, it further demonstrates the sacrifices of #Coalition service members & and the danger they face everyday
28 replies228 retweets649 likes


"And the danger they face everyday."

Can they cut the cutesy crap and sloganeering and answer the damn question of Why?

Why are US troops in Iraq.


US troops are still in Iraq.  US taxpayers on the hook for even more billions of dollars, Iraq continues to have a dysfunctional government, the violence ebbs and flows but never vanishes.  Not one damn thing has changed.

Why are US troops still in Iraq?

Another US service member is dead.  At least three more are seriously injured.  This is the time to ask those questions.  They should have been asked all along but they surely need to be asked when yet more US troops have been harmed for a -- what?

These are not 'honorable' deaths because the government has dishonored the troops they hide behind.  The government cannot explain the mission, cannot explain what allows the US to leave Iraq.  It's as murky as it ever was but that's generally the case when it comes to actions started with lies and actions that continue due to lies.

15 years and counting and US troops remain in Iraq.

US military spokesperson Sean Ryan said on Sunday, "We'll keep troops there [in Iraq] as long as we think they're needed."

For what are they needed?

"Stabilization efforts"?  How many years is the US government going to spend trying to 'stabilize' a government that they impose on Iraq, one that is not supported by the Iraqi people.


May 12th, Iraq held national elections.  Ahead of the elections, there had been big hopes -- these hopes included a large turnout.   Ali Jawad (ANADOLU AGENCY) noted, "A total of 24 million Iraqis are eligible to cast their ballots to elect members of parliament, who will in turn elect the Iraqi president and prime minister."   On the day of the election, the big news was how so few were turning out to vote.  NPR reported, "With more than 90 percent of the votes in, Iraq's election commission announced voter turnout of 44.5 percent. The figure is down sharply from 60 percent of eligible voters who cast their ballots in the last elections in 2014." AP pointed out the obvious, "No election since 2003 saw turnout below 60 percent."  AFP broke it down even more clearly "More than half of the nearly 24.5 million voters did not show up at the ballot box in the parliamentary election, the highest abstention rate since the first multiparty elections in 2005 [. . .]."

In that January 2008 debate, then-Senator Hillary Clinton was ridiculing Senator John McCain for his statement about US troops staying in Iraq for years, possibly 100 years.  She was insisting that she'd withdraw them all and the withdrawal would start within 60 days of her becoming president.

It's ten years after she made that claim.  Now we all know she can Tweet and we all know she can give speeches and interviews.  What we don't know is why she never seems to discuss Iraq.  She's very vocal about 'hot topics' but if she wants to be seen as presidential, she might want to stop acting like a host of THE VIEW and start addressing serious topics.

Seriously addressing the issues would mean acknowledging that no one has suffered more than the Iraqi people.  US media, US officials, even some Americans can't get honest about that reality.

You see it in idiotic Tweets that talk about violence -- for example the gun obsessed.  You'll see the anti-gun crow offer their crazy and rabid Tweets about how X died from gun violence in the US and only X died in Iraq.  Uh, no.  The X that they offer is US troops.    Now they can't even be bothered -- because they're so immature and uneducated -- with adding in the number of UK troops.  But what's worse than that is that they completely the ignore the Iraqi deaths.  You cannot talk about the dead in a war without noting the number dead from the host country.

And the nonsense of saying only X died in Iraq which does not acknowledge the over one million Iraqis that have been killed (it was over one million before Bully Boy Bush left office -- now days no one would even date -- not even THE LANCET -- attempt a count of the Iraqi dead).

In the US, we'll soon be in another presidential election cycle. November 2020, Americans will have the chance to vote.  There will be two years leading up to that vote where politicians will make promises and try to act as though they give a damn.

Some will -- as has happened in every election cycle -- note the Iraq War and they will say they've had to hug crying mothers (apparently fathers don't cry?) who lost children in Iraq.

If they do that, they should be stopped.

And not just because they're not acknowledging the Iraqi people who have died but also because it's time to stop playing.

US troops have died in Iraq.  That's awful.  They've been betrayed by their own government.  They've been tasked with an undefined mission that goes far beyond anything that the military can or could accomplish.

But the US government didn't just betray those citizens, it betrayed every American.  It's time for people to start showing up at rallies and town halls and explaining, "My child died because the US couldn't afford to provide adequate healthcare."  Or "My child couldn't get the education she needed because all the money went overseas into never-ending war."

The entire country is suffering because of this never-ending war.

Politicians who choose to ignore the Iraqi people should be confronted with the damage this war is doing and has done to the American people because we can't have basic services when all the money goes into the war machine.

Zaid Hamid‏Verified account @ZaidZamanHamid 23h23 hours ago
Here's the American "priest" arrested in #Turkey. He was with the Marines Special Ops that went into Iraq and toppled Saddam. He is a #CIA specialist in toppling governments. Turkey has a solid case against him. Pakistan has many such CIA snakes operating here..

I may comment on the topic above, not the individual, later this week.


Instead, let's go to crazy lady.  Tammy Duckworth and her phantom balls as she tries to out macho everyone else in the Senate.

Tammy Duckworth‏Verified account @SenDuckworth 14h14 hours ago
Saddened to learn of another American casualty in Iraq. We must always support our troops in harm’s way. They deserve our gratitude and appreciation for sacrificing and putting themselves at risk to keep us safe.

You didn't lose your legs because you were keeping "us safe."

You lost your legs in an illegal war.

You'd think you could be honest about it.

But not only she continue to lie, she continues to put others at risk with her lies.  There is no keeping the US safe via the Iraq War.  If anything, the wars have made the US -- and the world -- less safe.

Iraq did not attack the United States.

She's a bit like Celie telling Harpo to beat Sofia (Alice Walker's THE COLOR PURPLE).  For those who need a visual reminder, from the film.


In the meantime, the US government tries to impose a government on Iraq.


He'd Tweet more but he's too busy attempting to bribe officials in Iraq to back the government the US wants.

Jimmy Dore‏Verified account @jimmy_dore 22h22 hours ago
Jimmy Dore Retweeted James Comey
Remember all the TRUTH our gov & spooks like U gave us about Iraq & WMD's? & NOT ONE person was held accountable for those lies? Remember all the TRUTH in the TORTURE REPORT? about how spooks like U committed war crimes & lied about them & a corrupt pres sealed those TRUTHS?
Jimmy Dore added,
James ComeyVerified account @Comey
Truth exists and truth matters. Truth has always been the touchstone of our country’s justice system and political life. People who lie are held accountable. If we are untethered to truth, our justice system cannot function and a society based on the rule of law dissolves.
78 replies869 retweets1,896 likes

They lie and then they lie again.  And then, in Robert Mueller's case, they give breaks to pedophiles instead of prosecuting them to the full extent of the law.  Is there a reason (pattern?) for Mueller and his pedophile connections?  There's his 'star' witness George Nader, convicted pedophile and there's the big case he had as a prosecutor where the pedophile walked with a slap on the wrist.  I'm not accusing Mueller himself of being a pedophile but I am saying if you look at his career he seems to encounter a large number of them and they always seem to cut a deal with him.