I am not a Nancy Pelosi fan but what is the point of this Tweet?

The image isn't showing up but it's of Nancy Pelosi and her calling out Alexandria Ocasio-Cortez.

That she's one of those San Francisco liberals who put Asian-Americans into concentration camps?


Nancy's not of San Francisco.  She hails from Baltimore.  She's not connected to the internment of Japanese Americans.

If she were, I'd be the first to call her out.

In terms of the battle between her and Alexandria?  I root for Alexandria.

I also think it's hilarious that Alexandria has become her biggest rival considering the fact that Nancy named one of her daughters . . . Alexandria.


In the US, the race for the Democratic Party's presidential nomination continues.  Alleged leader of the pack Joe Biden continues to stumble.  The former vice president publicly praised racists when he was in the US Senate and not only does he refuse to apologize for those past statements, he has now taken to invoking the racists in his modern comments.  Bill Barrow and Elena Schor (AP) report:

The controversy began at a New York fundraiser Tuesday when Biden pointed to long-dead segregationist senators James Eastland of Mississippi and Herman Talmadge of Georgia to argue that Washington functioned more smoothly a generation ago than under today's "broken" hyperpartisanship.
"We didn't agree on much of anything," Biden said of the two men, who were prominent senators when Biden was elected in 1972. Biden described Talmadge as "one of the meanest guys I ever knew" and said Eastland called him "son," though not "boy," a reference to the racist way many whites addressed black men at the time.
Yet even in that Senate, Biden said, "At least there was some civility. We got things done."
A pile on from Biden's rivals quickly ensued. Booker said he was disappointed by Biden's remarks.


An unapologetic Joe Biden is defending his remarks about working with segregationist senators.

"Apologize for what?" Biden told CNN. “Cory should apologize," he added. "He knows better. There's not a racist bone in my body.” cnn.it/2L435hI

Joe Biden says he will not apologize after he touted work with segregationist senators to show how he can get things done in Washington.

His comment and his response to backlash has the former VP under fire, @PeterAlexander reports.


Former Vice President Joe Biden is under fire from rivals in the Democratic presidential race after he reminisced about working together with segregationist senators in the 1970s. The fight has suddenly brought race into the center of the campaign.


Former VP Joe Biden is refusing to apologize for comments he made on segregationist senators. @marykbruce breaks down the controversy. gma.abc/2WSiCIs

Joe refuses to apologize and that may be due to the fact that he didn't just praise the segregationists, he was also a part of them in real time.


I want to be clear. 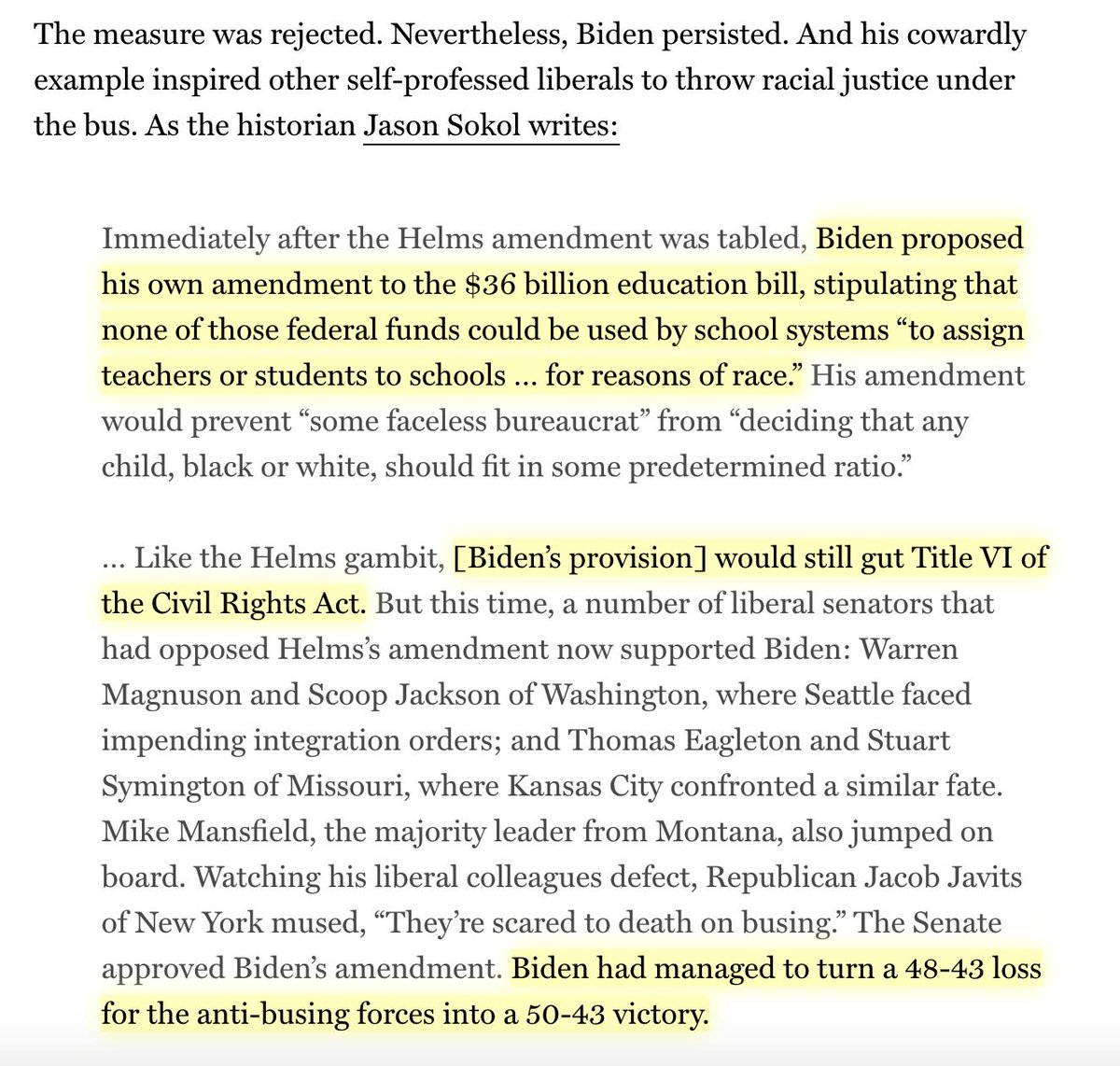 He not only refused to apologize he dug deeper by demanding that US Senator Cory Booker apologize to him.  Cory is one of the 24 candidates seeking the presidential nomination of the Democratic Party.


Vice President Joe Biden told me I should know better. As a Black man in America, here's what I know:


Cory Booker has put out a statement on Joe Biden's comments touting his work with segregationist senators. Booker says he's "disappointed that (Biden) hasn’t issued an immediate apology for the pain his words are dredging up for many Americans. He should.”

David Sherfinski (WASHINGTON TIMES) quotes Cory stating, "What matters to me is that a guy running to be the head of our party, which is a significantly diverse and wondrous party, doesn't understand or can't even acknowledge that he made a mistake, whether the intention was there or not.  That's what's stunning to me."


Stunning?  Isn't that exactly what Joe did with the women who came forward to talk about he made them uncomfortable with his touching, his rubbing, his sniffing of them?  Joe pretended to issue a statement of seriousness only to turn the whole issue into a joke repeatedly.  Joe doesn't do apologies.  More to the point, Joe refuses to learn from mistakes.


Joe Biden’s advisers had warned him not to use racist former Sen. James O. Eastland as an example of someone he could work with.

But Biden did last night. Now he is under fire from 2020 foes and others. Cory Booker says he should apologize immediately.
233 replies428 retweets1,237 likes

Again, he doesn't learn from his mistakes.  This is Joe.  This is gaffe prone Joe.  Always shooting himself in the foot.  And this is Joe on a light schedule.  Imagine him on a heavy schedule during the general election?  Imagine what he's going to say then or when he'll burst into tears at a campaign event again?  This is the choice for the Democratic Party?   Columnist Connie Schultz (wife of US Senator Sherrod Brown) offers, "My message on Twitter and on my public Facebook wall: If Joe Biden wants to boast about his relationship with a racist, he is now who we need to succeed the racist in the White House."


If there's any bright spot in this for the candidate, it's that the focus on this issue has diverted attention from another one.

Democratic presidential candidate Joe Biden declined to answer questions on the campaign trail this week about his son's overseas business dealings in countries where the then-vice president was conducting diplomatic work, an issue his political opponents have already begun to wield against him as he wades into the 2020 presidential campaign.
More than once, after his father engaged in diplomacy on behalf of the United States in foreign countries, Hunter Biden conducted business in the same country. At two separate campaign stops on Monday, Biden avoided questions about his son while his staff blocked reporters from approaching the candidate.
[. . .]


In April of 2014, the then-vice president led a U.S. delegation to Kiev tasked with rooting out corruption and advocating for Ukraine to diminish its reliance on Russian oil. The Obama administration had pledged aid money to support a fledgling Ukrainian administration recovering from a revolution that ousted the country's previous leader.
(MORE: Joe Biden is entering the 2020 field. Here's everything you need to know.)
"You have to fight the cancer of corruption that is endemic in your system right now," Biden told the Ukrainian parliament during the first of several post-revolution visits to the country. "And with the right investments and the right choices, Ukraine can reduce its energy dependence and increase its energy security."
Within weeks of his visit, Ukraine's largest energy producer, Burisma Energy, appointed Hunter Biden to a paid directorship on the firm's board.
Just months before, in December of 2013, there was a similar episode when the then-vice president led an Obama administration effort to tamp down tensions in the Far East. Hunter Biden disembarked from Air Force Two in Beijing alongside his father, ahead of a series of meetings between the vice president and several high-ranking members of China's ruling party. Upon his departure, Joe Biden called Chinese President Xi Jinping a "good friend."
Within weeks of that visit, Hunter Biden was doing business there, as a participant in a firm called Bohai Harvest RST. The corporation formed a novel Chinese-American investment partnership that involved such Chinese state-owned firms as the Bank of China. Reports at the time said they sought to raise $1.5 billion.


It has not been even two full months since Joe announced he was running for the nomination (April 25th) and already there's been Creepy Joe, Hyde Amendment Supporting Joe, Racist Joe and now Ethically Questionable Joe.  Exactly how many scandals is the press anointed front runner allowed to have?


It's 2019 and we still have someone who voted for the Iraq War attempting to run for president.   The Iraq War is a defining moment of the 21st century.  It's a tragedy and it's a crime.  And Joe Biden voted for it.  Isn't it time for America to move on from those who took the country to war?  A war that still hasn't ended.  US troops remain in Iraq to this day.  And let's not forget that Joe's not sorry.  Not sorry for his vote for the war, not sorry for anything to hear him tell it.