If you didn't, read "NYT: Can't own up to mistakes, be it the paper or Michael Gordon" to find out what you missed. In fact, read it even if you saw it so you can get what a disgusting creep Gordon is. One of the professional liars who helped the Bully Boy lie us into war can't own the blame he has coming his way. Or as C.I. wrote in what may be my favorite part of this epic entry:

Now? Now the little boy who cried wolf (more than once) wants to pin it all on big sis Judy. He wants to act as though it wasn't him, it was that older sister Judith Miller. Why, he played with Jimmy Risen and lots of other boys! He wasn't just spending all day inside playing WMD dress up with Judy. He was a tough boy.
Whatever he is, whatever he was, it wasn't a reporter.
And that needs to be remembered as he peddles excuses. It's no surprise that his book is nothing but war pornography as he attempts to sell American on more occupation, on better planned occupation. It's nothing but an excuse for an illegal war. And an endorsement for the continuation of it. (Excuse me, for the continuation of a "policy decision.") Not surprising. He's still making excuses for his own part in selling the "policy decision."
Little boy Gordon might want to consider borrowing a bit from an old Steve Martin routine and parroting "Excuse me." It wouldn't be convincing, but it would, at least, be a step in the right direction.

If you missed the creep trying to weasel out of his blame, and trying to insult Amy Goodman which only made him look like a worthless creep, listen or watch "New York Times Chief Military Correspondent Michael Gordon Defends Pre-War Reporting on WMDs."

In fact, that's probably the one thing I'd add to C.I.'s entry. I'd point out that when confronted, Gordon not only can't accept the blame, he lashes out to feel like the big man. He starts hurling insults at Amy Goodman like that's going to change the fact that he LIED and that his LIES helped lead America into war.

Amy Goodman was so cool. She didn't let him phase her. He was trying to be so insulting, waving his finger and talking down to her, telling her she wasn't informed and lecturing her about journalism. Amy Goodman didn't let it phase her.

I listen to Democracy Now! on the radio (KPFA) and usually hear it twice if I'm working on a project because I'm usually finishing my cereal when it comes on and if I'm in the dark room or the living room, I've usually got the radio on. But I caught this one three times because Maggie and Sumner went over to a friend's and we were telling her about it. Sumner's flipping channels and then says, "Look it here it is."

So I got to see Gordon wave his finger at Amy Goodman. I got to his greasy, bloated face. He looked like a wall-eyed salmon. I couldn't believe how repugnant he was physically. But some people look exactly like they behave and Michael Gordon is a greasy, shifty-eyed liar.

Alexander Cockburn and Jeffery St. Clair noticed it and they wrote about it:

Footnote: It looks as if the fire escape chosen by Bush to save him from those low thirties numbers is the old neocon refrain of the Iranian menace. This clashes with the official line of the pundit legions, which is that the neocons have been sent out to pasture and replaced in the corridors of power by "pragmatists". We even heard Michael Gordon of the New York Times and his co-author Bernard Trainor, while flacking their new history of the Iraq war on Amy Goodman, claim that the neocons were "on the outside" during the planning and execution of the Iraq war. That was before Goodman spoiled Gordon's day by bringing up all those WMD fantasy pieces he wrote with Judy Miller. Anyone who needs reminding on just how the neocons did it last time, the better to prepare for the next war, would do worse than keep by their hand the IHS Press compilation Neo-Conned Again, which kicks off with a contribution from your two CounterPunch editors.

Cockburn will be on:

RadioNation with Laura Flanders
Third Anniversary of the Iraq War
Three years after invading Iraq, DC Dems are running from censuring W. Even as Bush defends pre-emptive war and says Iran is next
.Saturdays & Sundays, 7-10pm ET on Air America Radio
Who says the left has no alternatives to war?
We talk to Alexander Cockburn who has no fear... and to the former director of the Peace Corps, and UNICEF President -- Carol Bellamy. Plus anti-war veterans call in from New Orleans; wounded Iraqi children describe their lives today. And Nation author Christian Parenti on why Europeans are doing a better job than the US in Afghanistan.
A one-hour version of last weekend's live broadcast from Montana is available at http://lauraflanders-com.c.topica.com/maaeBgxabo5GAbQccDue/
It's all on RadioNation with Laura Flanders this weekend on Air America Radio.

So make a point to listen (Saturday's show, if you hear it broadcast live, starts in mere minutes). 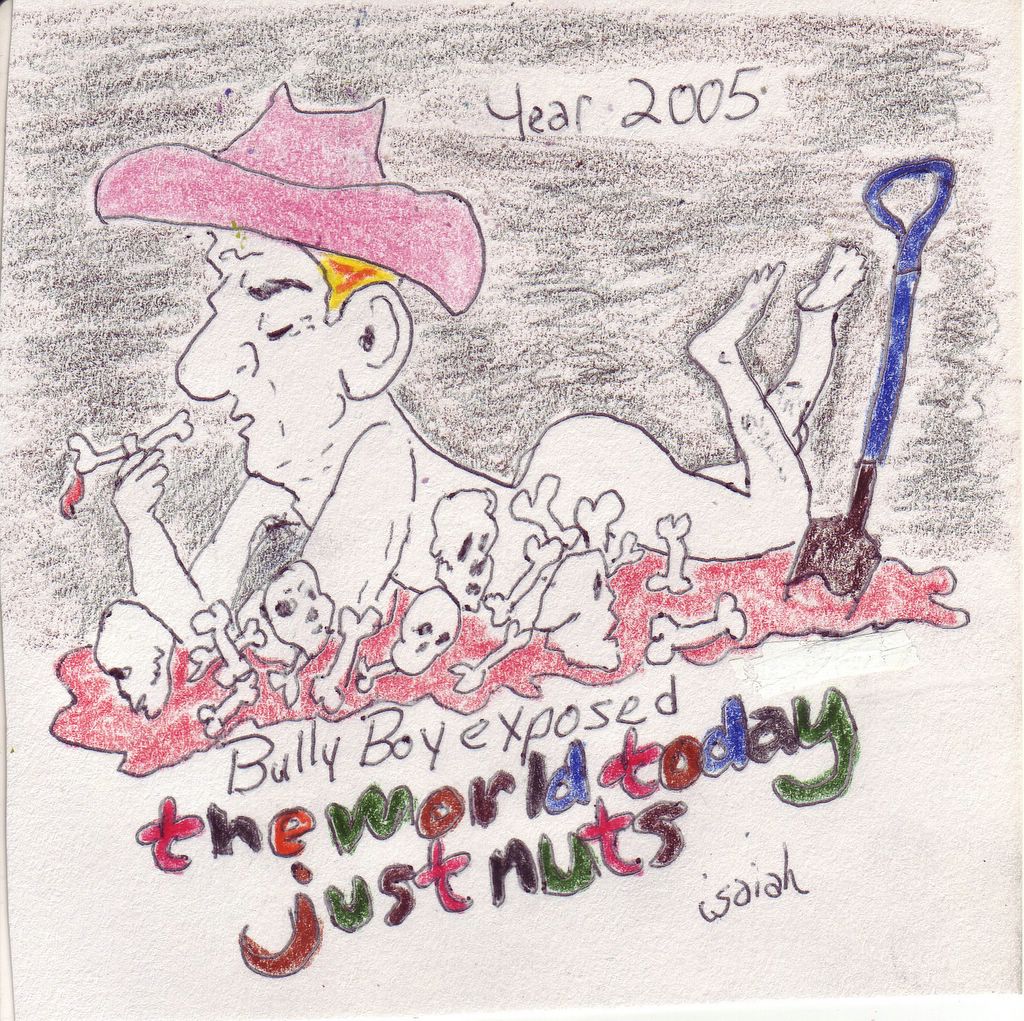 The illustration is "The Year 2005: Bully Boy Exposed" by Isaiah.

Bully Boy's got the blood lust. If that's not obvious to you by now, ring-ring, clue phone, line one.

In my state, 240 residents have given their lives for Bully Boy's illegal war in Iraq. How many lives has your state given? You can check by state here.


The official count, take that for what it's worth, right now stands at 2311. That's the number for American troops who have died in Iraq, the official number. Which doesn't include those who were air lifted out and died elsewhere.

So we're coming up on the third anniversary of the invasion. Three years and no end in sight.
Bully Boy can't let go of his blood lust. He's like a vampire. But instead of feeding off his own brood, he wants to feed off the children of America. How long are we going to let him get away with that?

There's really no excuse for not doing so.

If it weren't for the peace movement in the sixties and early seventies, we wouldn't have left Vietnam when we did. So with this weekend coming up, you can wonder what if, or you can get out there and participate.

One protest, one rally, won't end the war.

That's not the point. You have to demonstrate because it lets people know where you stand. It gives other people the courage to speak out. Each demonstration helps the cause a little more.
And if we come together for peace, the war will end sooner. If we continue to increase our numbers and continue to make our voices heard, we can put an end to the occupation.

Silence isn't an answer and it isn't an option.

Counting on big media? Oh get real -- and read "The war coverage (and lack of it)."

I think if you're a member of The Common Ills community, you know of Democracy Now! You should at any rate. But you need to be using that and finding other indpendent media as well and you need to be sharing it with your friends.

Big media failed us and it continues to fail us. I'll give you an example of one item I learned on tonight's KPFA Evening News: Bully Boy changed the rules. Again. This time on gays and lesbians in government being eligable for a security clearance. Under Bill Clinton it was stated that their sexual orientation couldn't be used against them. Now the rule is that it can't be the sole reason for denying a security clearance. Can't be the sole reason implies that it can be one reason and don't kid yourself otherwise.

Here's something else I learned, 87 bodies were found in Iraq. Some apparnetly were gagged, bound and tortured. There's another driving ban in Iraq.

What did you learn from your news provider this evening? A hold up, a mugging, a drive by?
Ever feel like TV news exists solely to scare the hell out of you? Doesn't seem to exist to provide you with anything that could inform you or help you make your life better, does it?

Hopefully, you have a news provider that provides you with real news. Be sure to get the word out on that. And get the word out that you are opposed to the occupation of Iraq. Bully Boy's tanking, there's no reason to be scared at this late date.

New Poll: 36% Approve Bush; 60% Say War is Going Badly
Bush made the announcement during a speech that launched a new public relations campaign to win greater support for the war in Iraq and his presidency. The latest USA Today/CNN poll shows the president's approval rating is at just 36 percent. And 60 percent of the country says the war in Iraq is going badly.

That's from Democracy Now! and here's another item, same source:

Mass Student Protests Continue In France
In France, student demonstrations are continuing throughout the country to protest a new employment law that will make it easier for companies to fire young workers. On Monday, hundreds of university students stormed the College de France in the Latin Quarter of Paris. Students hurled stones and cans at the police who responded with tear gas. Nearby the elite Sorbonne University remains closed. Over the weekend police raided the school to force out several hundred protesters who had taken over buildings. Sorbonne was the center of the May 1968 student uprising. Agence France Press reports student strikes are taking place at more than 40 universities across the country. More street demonstrations are planned for today.

The students in France make themselves heard (and then some). It's time for everyone opposed to the war to have the guts to say so. Publicly.

I was on the phone before I started this, on the phone with Rebecca. Make a point to check out Sex and Politics and Screeds and Attitude because she had a lot ot say on how Dems won't stand up for Russ Feingold. Also Betty has a new chapter entitled "First Among Fools." Check it out. Most important, use your voice, help stop the Bully Boy's blood lust.