There really is no one like Roberta Flack.  She's a true original.

She brings together all these various diverse strands and combines them together in a manner that works.

Kevin de Leon is running for the US Senate.

Laurel Rosenhall‏Verified account @LaurelRosenhall Feb 23
In the CA Dem labor caucus, the energy for Kevin de Leon was enormous. “I am one of you,” he told them. “It’s your time Kevin,” someone in the audience shouted. 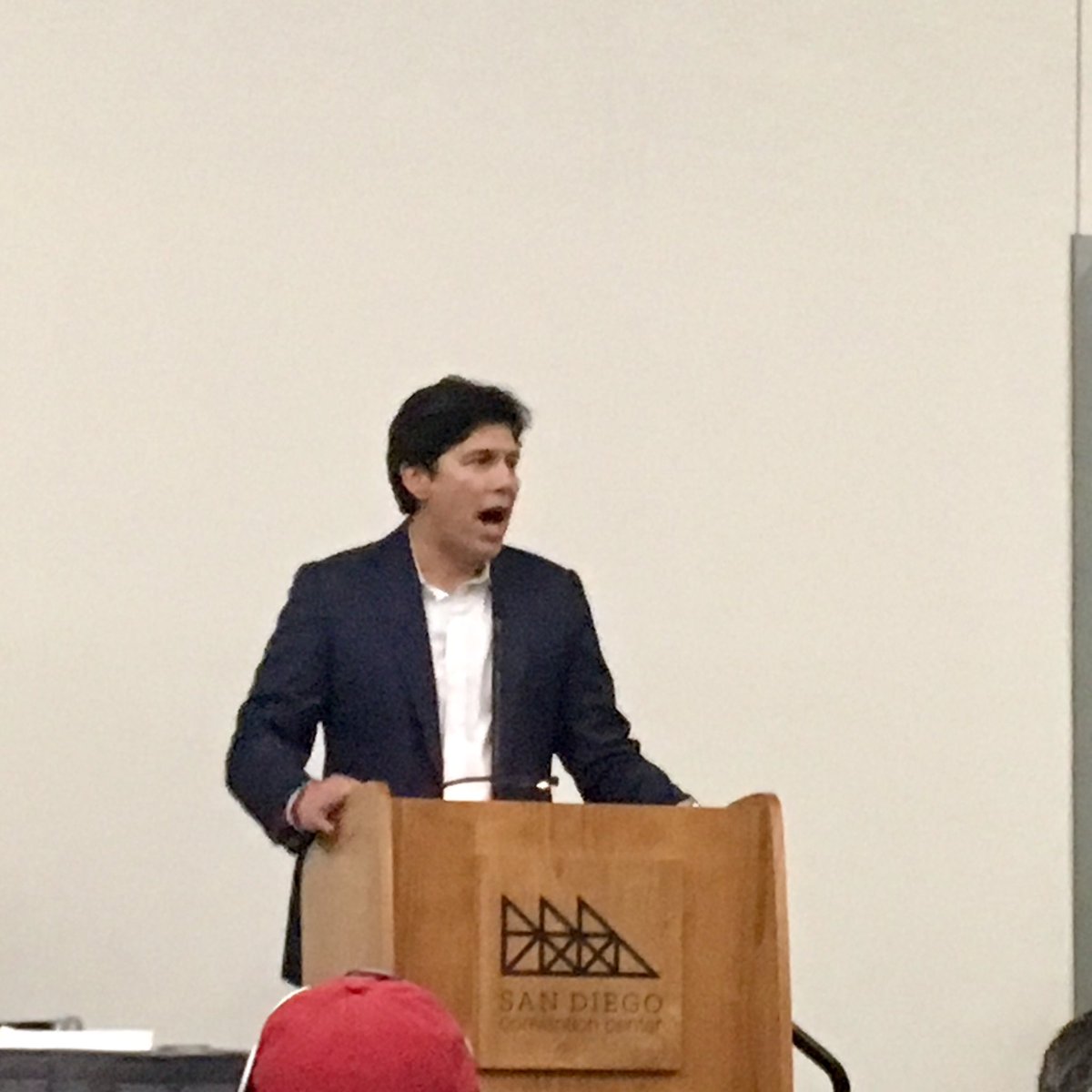 
Dennis J Bernstein spoke with Kevin de Leon on FLASHPOINTS (KPFA) and a transcript of the interview is available at CONSORTIUM NEWS:


Dennis Bernstein: With everyone watching Washington and wondering whether humane immigration reform can be passed, what are you expecting from Congress?

Kevin de León: These are very difficult times for many of us.  As a nation, we are grappling with the resurgence of ugly, hateful ideologies, including white supremacy, spewing from the highest levels of our federal government.  We are confronting something we have never had to come to terms with before in our political history.
At the same time, I have never been more proud to be a Californian.  In November 2016, Californians rejected the politics fueled by resentment and bigotry.  The DACA issue is very dear to my heart.  In California, we have the vast majority of DACA beneficiaries, the vast majority of Dreamers, and we have the vast majority of beneficiaries of the TPS [Temporary Protected Status] program, primarily from El Salvador.   We are also home to the majority of immigrants in the nation, both those who became naturalized US citizens and those who have yet to normalize their status because of the dysfunction in Washington, D.C.

In this context, the DACA program is really a low-hanging fruit.  Both Democrats, as well as Republicans among the national electorate, strongly support the Dreamers and DACA.  Why the issue should seem so complex is beyond me, except that there is political gamesmanship being played and the DACA beneficiaries have been taken as hostages.  I hope that a common sense settlement can be reached to give these young men and women the protections they deserve.  We need sensible comprehensive immigration reform for the estimated 11 million undocumented immigrants across the nation.


Kevin de Leon would be a needed change for California.  He's running against Dianne Feinstein who, never forget, voted for the Iraq War.

That would be the still ongoing Iraq War.

Wednesday, we noted how the call for US troops to leave Iraq could become an election issue.  On Thursday, that happened.  Ghassan Adnan and Isabel Coles (WALL STREET JOURNAL) report:

Iraq’s parliament on Thursday called for a timetable for the withdrawal of foreign troops, putting pressure on the country’s leader ahead of May elections as he seeks to prevent a resurgence by Islamic State militants.
[. . .]


A majority of lawmakers who attended a parliament session on Thursday voted in favor of a motion obliging Mr. Abadi to draw up a clear timetable for the withdrawal of foreign troops. The motion isn’t binding but promises to become a campaign issue for Mr. Abadi, who is seeking a second term in parliamentary elections in May.


When we noted this likely possibility on Wednesday, I had no idea it would pick up and move so quickly.  But it has which goes to just what an issue this is -- a rallying issue -- in Iraq.

The Iraq War's over?

Then why does the legislature need to demand that the troops leave?

It's a war and it's an occupation.

And expelling US troops is the popular opinion and the vote getter in the May 12th elections.


MIDDLE EAST MEMO explains, "Thursday’s vote, backed by all but a handful of the 177 lawmakers present, was sponsored by lawmakers from the ruling Shi’ite Muslim bloc in parliament."

Hayder al-Abadi, like Nouri al-Maliki before him, was selected by the US government.  Also true, he believes he needs US troops on the ground to stay in power.

Neither man was in Iraq in 2002.  Both are cowards who fled Iraq decades ago and only returned in 2003 after the US-led invasion.

They are not of the Iraqi people.

They are two cowards who fled the country when they felt threatened and only returned to Iraq when they could hide behind US troops.

The Iraqi people want US troops out of the country.

Hayder al-Abadi's re-election campaign just hit a significant snag that's he will have to try to dance around.  THE DAILY STAR notes, "The Iraqi Parliament’s demand underscores the balancing act Abadi must conduct between the U.S. and Iran, his two biggest military allies who are themselves archadversaries.  There are no Iranian regular forces in Iraq but there is the Iranian-backed Shiite militia, Al-Hashd al-Shaabi, which is allied with Abadi’s government."

The U.S. military says the fate of its ongoing presence in Iraq will be decided in “coordination with” and will depend on the “approval of” the government in Baghdad.
The comments by Col. Ryan Dillon, a spokesman for the U.S.-led coalition that battled the Islamic State in Iraq, came in response to Iraqi parliament’s demand Thursday that a timeline be set for the pullout of foreign troops from the country.

That's a reflection of the attitude that legislatures do not matter -- not in Iraq, not in the US.  In the US, President Donald Trump's attitude (like Barack Obama before him) is that there is no need for any authorization for US troops to be in Iraq, arguing that this is all justified by a decades ago vote.  The legislature is supposed to represent the will of the people but the US government -- in both the US and in Iraq -- ignores the will of the people.


Departing?  Jason Ditz (ANTIWAR.COM) observes, "That’s potentially going to be a problem though, because while the other nations are all making clear their presence is very temporary, the US has been very public from the start that this is a permanent deployment, and they don’t plan to ever leave."  Bel Trew (TIMES OF LONDON) points out, "There are believed to be more than 5,000 US soldiers stationed in Iraq to fight Islamic State. American troops make up the largest foreign presence, although Washington formed a 74-country coalition to help fight Isis. The US has been reluctant to significantly reduce those numbers."

And the war drags on.

It's time for the people to step up and say "ENOUGH!"


March 1, 2018
For immediate release:
What: Women's Peace March on the Pentagon Against the bi-Partisan War Machine
When: October 20-2, 2018
Who: Women (and their allies) who are sick and tired of the US military war machine waging multiple wars and military misadventures around the world.
CONTACT: CINDY SHEEHAN
CINDYSHEEHAN@MARCHONPENTAGON.COM
Dozens of prominent antiwar activists, groups, and journalists have endorsed the Women's March on the Pentagon on October 20th and 21st.
The Women's March on the Pentagon was envisioned by noted Peace Activist Cindy Sheehan (whose oldest son Casey was killed in Iraq on April 4, 2004) in direct contrast to the more democrat party oriented Women's March that has so far refused to address out of control US militarism as one of the root causes of violence against women.
From her home in Vacaville, CA, Cindy Sheehan stated, "There are many social ills in the US and globally which will not be addressed as long as the US slaughters innocents around the world and spends hundreds of billions of tax dollars doing so."
"A women led movement to address out of control militarism and the rampant patriarchy that causes it must arise so our children will stop fighting, dying, and killing the children of other mothers."
CINDY SHEEHAN WILL BE LEADING A SERIES OF MEETINGS ON THE EAST COAST IN APRIL (AND A NATIONAL CALL-IN CONFERENCE CALL ON MARCH 14)


Cindy Sheehan and other lead organizers are available for interviews, or for further questions.