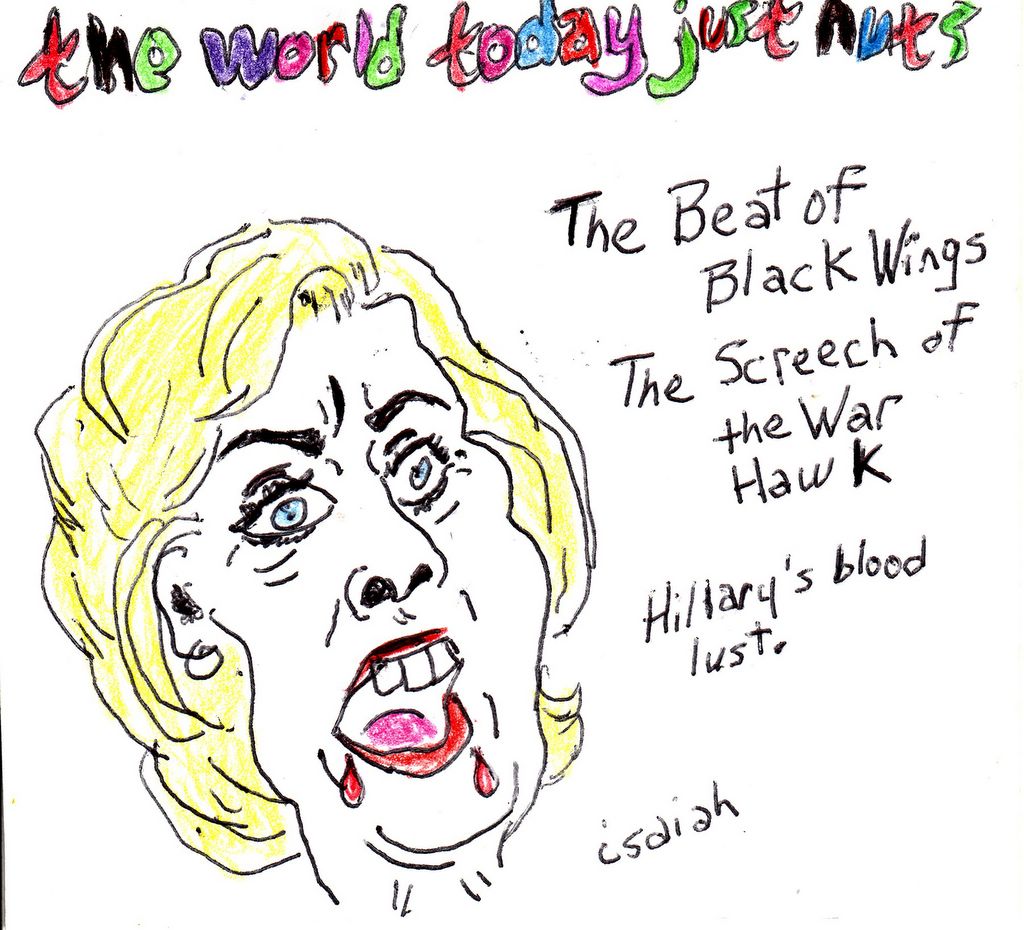 I love Isaiah's latest, "Isaiah's The World Today Just Nuts 'The Beat of Black Wings/ The Screech of the War Hawk'." It's Hillary going ballastic at the so-called Take Back America.

Take it back from what? NAFTA? Well Hillary's got a connection there, right? Take it back from the war on poor women? Hey, Hillary helped sell the so-called "welfare reform." Why was this woman even invited to speak?

I asked C.I. why, in two posts this morning, Hillary wasn't on one side of the page? C.I. replied, "You mean the left? You want me to put Hillary on the left?" We both laughed.


Normally, the illustrations come on the left at The Common Ills. But I completely understand why C.I. didn't put it that way this morning. My blogroll is on the right so I will put the illustration on the left. If you missed it, the so-called Take Back America stabbed CODEPINK in the back. Me? I'll hang with CODEPINK -- they speak truth and they're a lot of fun. They're creative as hell and they've never forgotten Iraq which is more than you can say about most of the "left" organizations. Medea Benjamin writes about what happened in "Peace Activists at Hillary Clinton's Speech Try to Take Back 'Take Back America'," so read that.

Thanks to C.I. for giving a heads up for me (this morning for Guns and Butter). I was in the desert. (That's "desert," I didn't dive into something chocolate or frothy! Though I am hungry.) A group of friends wanted to go and I liked the idea. We left Sunday morning (as soon as I'd done my part with the gang on The Third Estate Sunday Review.) and we stayed out there until Wednesday morning. I got home around noon, took a shower, made a sandwich (don't tell Trina!) and sat down to listen to KPFA broadcasts Guns and Butter.

Bonnie Faulkner interviewed Kevin Ryan (who I kept calling "Jack Ryan" all day -- and I've never seen any of those movies or read the books -- I don't care for the author or the message of those Clear & Present Danger films). Ryan worked for Underwriters Labs and they were the company that certified the steel in the World Trade Center towers. There was a problem with a finding and Ryan pointed out (that the steel was exposed to hot enough temperatures that would cause it to melt) in a letter. The letter ended up being posted online. He was fired as a result with the claim being that he had presented himself as a spokesperson for the company or some such nonsense.

They fired him to silence him. If that weren't the case, he wouldn't be fired. He might be warned, he might be disciplined. There was a discussion about the way the floors dipped or bent that was way over my head. It probably won't be over your head so make a point to listen to this interview. Why fire someone?

If you think they've made a fool of themselves, you discipline them. If you think they weren't clear enough in something that went online (he didn't post it), you explain the policy to them. You only freak out and fire them if you're nervous.

So why was Underwriters Lab nervous? What did Ryan do that made them nervous? If you want to know that, you'll need to listen to KPFA's Guns and Butter every Wednesday at one o'clock (PST) or you can use the archives at either link and listen at a time that's better for you.

Please read Elaine's "A difference of opinion" which is wonderful (and I did like the comments re: psychiatry -- it has a long history of anti-woman bias due to its Freudian roots). Also read Rebecca's "jason" which not only says some things that need to be said, it also shows the part of Rebecca that makes us all love her so much. She doesn't drop someone. She's fiercely protective. Read "Ruth's Public Radio Report" because you will be screaming, "Go Ruth!" I did.

I plan to blog again this week and I'll note some other things then. Loved the desert. Wish I was still there. I'm closing with a verse (same one C.I. used) from Joni Mitchell's "The Beat of Black Wings:"

"They want you -- they need you --
They train you to kill --
To be a pin on some map --
Some vicarious thrill --
The old hate the young
That's the whole heartless thing
The old pick the wars
We die in 'em
To the beat of --
the beat of black wings"
Posted by Kat at 5:26 PM