I got a watching recommendation.  Don't offer many of those, I know.  But I love Nate Bargatze.  He is so funny.  And he's got a new NETFLIX special NATE BARGATZE THE GREATEST AVERAGE AMERICAN.

I was laughing non-stop at everything.  His wife uses the phrase "One fell swoop."  But she uses it wrong.  He tells her that and they have a big fight.  They don't talk later that evening.  She kisses him goodnight and he figures that's her I'm-sorry.  So the next morning . . . he brings up "One fell swoop''  again.  The fight is back on.  He says right then his marriage could have ended in one fell swoop.

There are some funny hotel waffle stories as well.  And there's generational jokes when he can't work Chromecast in his hotel room. 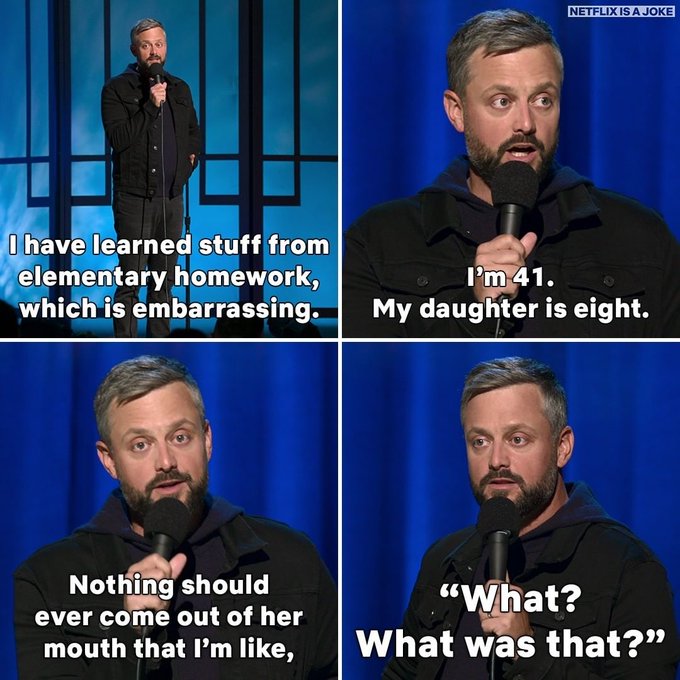 There is so much hilarious humor in this special.

And people ask me-- seemingly unrelated topic -- do I realy loathe Channing Dungey?  Yeah, I do.  Because she's a stupid idiot.  Nate is hilarious and ABC wants him to do a sitcom.  They spend time developing it and then . . .  Channing idiot passes on it.

I can't stand her.  She's a failure everywhere she goes.  I was so happy when NETFLIX fired her.  And I was even happier when she tried to spin it and pretend she left by her choice and then CEO Reed Hastings gave that interview where he said, no, we fired her, if you don't deliver you get fired.

She failed at ABC -- and got fired -- failed at NETFLIX (where friendships got her hired) and fialed and got fired.  Now she's doing WB TV.  I'm sure she'll be fired from there too.

And not giving Nate his sitcom was one of the stupidest things that idiot ever did.

Friday, March 26, 2021.  Migh the AMUF be repealed and would that end the Iraq War?  Joe Biden finally gives a press briefing, Moqtada al-Sadr offers to disarm others, and much more.

The House Foreign Affairs Committee on Thursday advanced a measure to repeal a nearly two-decade-old authorization for the use of military force in Iraq, lawmakers’ first effort to claw back their war-making powers under President Joe Biden.

The panel’s action, which sailed through with support from Democrats and Republicans alike, scraps the 2002 authorization for the use of military force (AUMF) against Iraq, which at the time was led by Saddam Hussein. A similar push is already underway in the Senate, where Sens. Tim Kaine (D-Va.) and Todd Young (R-Ind.) have proposed repealing the 2002 AUMF, in addition to a 1991 measure that also authorized military force in Iraq during the first Gulf War.

Rep. Gregory Meeks (D-N.Y.), the committee’s chair, said the outdated authorizations serve no operational purpose and argued that existing threats can be addressed by the 2001 authorization, which dealt with terrorist groups in the aftermath of the Sept. 11 attacks.“There are continuing threats from Iranian-backed militants. There are threats from ISIS and al Qaeda. That said, the 2002 AUMF doesn’t help us deal with any of these threats,” Meeks said. “Our forces would stay under Iraq under the 2001 AUMF, and the president can always defend America and our forces under Article II [of the U.S. Constitution].”

So even the repeal of the AUMF, if it happened, wouldn't end the continued occupation of Iraq by US troops.  SPUTNIK notes:

The 2002 Authorization for the Use of Military Force Against Iraq (AUMF), passed in October of that year, made the forthcoming US invasion of Iraq in March 2003 legal under US law. It built on the AUMF that was passed in 2001, in the aftermath of the September 11 terrorist attacks by al-Qaeda that killed 3,000 people. The 2002 law further extended the principle of pre-emptive strike that was at the heart of then-US President George W. Bush’s military doctrine that became the US War on Terror.

However, while a couple of Republicans sided with their Democratic colleagues in voting for the resolution, some said it was too soon to shred the 2002 AUMF, since a replacement for the 2001 AUMF hasn’t been implemented yet.

“Real AUMF reform requires Congress and the administration working together on actual text to replace the aging 2001 and 2002 AUMFs to provide authorities needed to keep the American people, and, most importantly, our deployed troops, safe from terrorists,” said Rep. Michael McCaul (R-TX), the leading Republican on the committee.

REUTERS adds, "The U.S. Constitution gives the power to declare war to Congress. However, that authority has gradually shifted to the president as Congress passed AUMFs that did not expire – such as the 2002 Iraq measure, as well as one that allowed the fight against al Qaeda in the wake of the Sept. 11, 2001, attacks."  The authority has shifted by custom, not by law.  By law, only Congress has the right to declare war.  By refusing to hold that power, they have allowed the executive branch to use it and courts can recognize custom.

PRESS TV adds, "On Thursday, a number of armed Iraqi groups took to the streets of the capital Baghdad in a show of force, demanding the expulsion of all foreign forces from Iraq."  Staying with the topic of militias,  Shi'ite cleric Moqtada al-Sadr is back in the news.  Also covering the parade, MEMO notes:

An armed Iraqi militia yesterday threatened to target US forces and their agents in the country, Anadolu news agency reported.

The Rab'Allah militia made the threat during a military parade with weapons in the streets of the capital, Baghdad.

"The Iraqi people are living in the darkness of the brutal American occupation and a complicit and puppet government," the movement said in a statement, adding that its fighters have travelled across the capital "in a threatening message to the Americans and their agents".

The movement published photos of its fighters riding in pickups and carrying machine guns and RPGs in Baghdad.

These militias are now part of the government forces and Mustafa al-Khadimi has become the second prime minister in a row who, despite officially being over these forces, cannot control the militias.  ARAB WEEKLY reports:

Iraqi Shia cleric Moqtada Sadr is increasingly wanting to appear as a statesman while his political ambitions to hold the reins of the executive authority in the country are growing.

Earlier in February, the populist Shia cleric said he backed early elections overseen by the UN, in a rare news conference outside his home in the Iraqi shrine city of Najaf.

Iraq is meant to hold earlier parliamentary elections this year, a central demand of an anti-government protest movement which erupted in 2019 and involved Sadr’s supporters.

The elections will be taking place under a new electoral law that has reduced the size of constituencies and eliminated list-based voting in favour of votes for individual candidates.

Sadr’s supporters are expected to make major gains under the new system.

In November, Sadr said he would push for the next prime minister to be a member of his movement for the first time.

With eyes on the executive authority, the Shia cleric has been calling recently for control of the weapons’ chaos in the country so as to curb attacks by armed factions on foreign forces, their supply convoys and the headquarters of the US embassy in Baghdad.

Sadr’s calls come even though the Shia cleric himself is at the head of the most powerful militias in Iraq, the Peace Brigades, which are seen as a heir to the Mahdi Army militia that had previously led an offensive against government forces under the rule of former Prime Minister Nuri al-Maliki.

The Mahdi Army was 'disbanded' in 2018.  Ir was active again by January 2020.  Mostada was once a movement leader with even some of his harshest critics hailing him as the potential healer of Iraq.  That was 2018.  But Shi'ites began turning on him in 2020 as he went from supporting the protests to opposing them to supporting them again to attacking them.  His ambition apparently was too much for him to control, let alone conceal.

This ambition is at the heart of his proposal to disarm other militias.  Others.  Not his own.  It would give him a leg up that might make up for some of the popular support he has lost since early 2020.

Joe Biden has a lot of ambition as well and look where it's led him -- he's not just President of the United States, he's Joe Bomber, destroying Iraq.  Chad Garland (STARS AND STRIPES) reports:

The U.S.-led coalition against the Islamic State has conducted more airstrikes in Iraq this month than it did all of last year, destroying scores of enemy positions and killing dozens of terrorists.

Coalition jets carried out over 150 strikes against ISIS fighters in the mountains south of Mosul this month, U.S. and Iraqi military officials said earlier this week. An analysis of previous coalition strike data shows fewer than 120 airstrikes were carried out against ISIS in Iraq all of last year.

Including Iraqi air force and army aviation operations, a total of 312 airstrikes have destroyed 120 enemy positions and killed 27 terrorists, Col. Wayne Marotto, a spokesman for the military coalition, said in a tweet Wednesday.

Maybe Joe does have a 'plan' for ending the Iraq War?  End Iraq itself by bombing it out of existence?

Biden Bluster was on display yesterday as Joe finally held a press briefing -- his first since being sworn in as president.  Ted Rall Tweets:

Biden held his very first news conference on Thursday, bringing to a close the longest amount of time in which an American president has held off hosting such an event in modern times. Your take depends on your politics.

Lights, Camera, Biden
US President Joe Biden held his very first news conference on Thursday, bringing to a close the longest amount of time in which an American president has held

Joe used a lot of words to say very little -- certainly nothing worth applauding.  Patrick Martin (WSWS) observes, "Biden pronounced on a number of other topics, ranging from the filibuster (he is not yet prepared to overturn it), to Afghanistan (he said the US would not meet a May 1 withdrawal deadline but would be gone by the end of the year), to his expectations for the 2024 election (he said he and Harris would run for reelection, but was unsure what his opposition would be, or if the Republican Party would even exist) to North Korea (he said that it was the most serious foreign policy issue facing the United States)."

I'm seeing nothing at ANTIWAR.COM and I checked the US Green Party's feed for some form of critique.  Guess everyone was busy?  Or maybe Biden just bores everyone into slumber?  THE KATIE HALPER SHOW did cover the  press briefing.