Diana Ross' THANK YOU discounted to $14 at AMAZON right now

"Turn Up The Sunshine" by Diana Ross and Tame Impala is from the new film MINIONS: THE RISE OF GRU.

And I've got some Diana news for you, her latest album THANK YOU has a bonus discount at AMAZON right now: 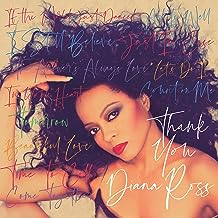 I gave you the heads up.  It's a great album, I praised it here and I put it on the year's top ten.  As I've noted since, I think I should have put it higher.  It's an album you return to.  I probably listen to it at least three times a week.  At least.  It's a favorite of mine.  And there's so much on it to love.

"All Is Well" is another great track.

And "Thank You" should have you dancing around the room.

It's one great track after another.  And THANK YOU is one of Diana's finest albums -- up there with SWEPT AWAY, diana and THE BOSS.

Friday, July 15, 2022.  Joe Biden takes a blood march through the Middle East and Miss Moqtada al-Sadr throws a lazy Friday get together.

US President Joe Biden visits the Middle East and shows who his friends are.  We'll note some commentary and some Tweets.  Jeffrey St. Clair (COUNTERPUNCH) observes:

+ The Peace Prize Prez, Barack Obama, visited Saudi Arabia more frequently than any other president–four times in 8 years, visits during which the genocidal war on Yemen was plotted, financed and unleashed.

+ In its yearly Children and Conflict Report, the UN charges that Israel killed 78 Palestinian children last year and maimed another 982.

+ According to the Israeli newspaper Haaretz, around 80 Egyptian soldiers killed during the 1967 Middle East War are buried in a mass grave under Mini Israel, a popular Israeli theme park.

+ After he heaped praise on the Jewish State, declared himself a Zionist and mumbled vacant promises about an eventual “Two-State Solution,” Biden’s entourage took him through the streets of Bethlehem, where he encountered these signs erected by the Israeli human rights group, B T’Selem… On Thursday, President Biden said he believes the “vast majority” of Americans are committed to Israel’s security. The president made the comments from Jerusalem after holding a meeting with Israeli Prime Minister Yair Lapid.

“I think the vast majority of the American public, not just my administration — is completely devoted to Israel’s security without any ifs, ands, or buts — without any doubts about it,” Biden told reporters.

Biden made the comments a day after an interview aired on Israeli TV where he said progressives Democrats that have denounced Israel as an apartheid state were “wrong.”

"Keep watching instead the daily dirty grind that is Israel’s occupation continue to brutalize Palestinians while stealing their land, their livelihoods, their dignity and their lives. Because the Biden administration offers nothing."

The Party of Socialism and Liberation notes:

While the inflation crisis and attacks on basic rights continue in the United States, Joe Biden is traveling abroad to focus on shoring up U.S. domination over the Middle East.

Biden began his tour with a visit to Israel, landing on Wednesday. In a speech upon his arrival, Biden went out of his way to emphasize his ideological support for Zionism – the racist political movement that established the state of Israel on the land of the Palestinian people. Echoing the religious fundamentalist justification for the expulsion of Palestinians from their homes, Biden stated, “[Y]ou need not be a Jew to be a Zionist … Every chance to return to this great country, where the ancient roots of the Jewish people date back to biblical times, is a blessing.”

Biden explained in the same speech, “From here, I’m going straight to a briefing on Israeli missiles and rocket defense capabilities, including the U.S. support for the Iron Dome and Israel’s new laser-enabled system called the Iron Beam.” The U.S. government gives Israel nearly $4 billion every year for military equipment to repress Palestinians and threaten neighboring countries. This is in essence a subsidy for U.S. weapons manufacturing corporations, who receive the contracts to provide these armaments.

Biden has ignored demands for a meeting from the family of Shireen Abu Akleh, the Palestinian-American journalist who was murdered by Israeli soldiers in May while she was reporting on an Israeli raid in the occupied West Bank. Despite being a U.S. citizen, American authorities conducted a sham investigation into her killing that clearly aimed to cover up the criminal role of Israel.

New video received from Ramallah: Palestinians burn portraits of President Joe Biden, rejecting his visit to the region. "Your strategic allies, Biden, are the ones who killed [journalist] Shireen" Abu Akleh, I'm told one of the signs says. "Biden is not welcomed in Palestine!"
4:34 PM · Jul 14, 2022

Joe's trip is revealing to many.  It says a great deal about the US government.

There may not be a photograph today of US President Joe Biden shaking hands with Saudi despot Mohammed bin Salman. The press has been largely excluded from the Saudi leg of Biden’s four-day trip to the Middle East, and Biden’s aides have announced a new protocol limiting Biden to exchanging fist bumps, not handshakes or hugs, supposedly due to the greatly accelerated spread of the Omicron BA.5 subvariant of the coronavirus.

There is good reason to believe that this policy has nothing to do with any new health concerns for the 79-year-old president. The White House desires to reduce the amount of attention given to Biden’s embrace of a notoriously bloodstained murderer. He is courting bin Salman in an effort to obtain a sizeable increase in Saudi oil production, both to ease the pressure on NATO countries from the cutoff of Russian supplies as a byproduct of the war in Ukraine and to defuse social discontent in the US itself as gas prices have soared to nearly $5 a gallon.

It is his first trip as president to the region where American imperialism has carried out its bloodiest crimes over the last three decades, waging wars in Iraq, Syria and Libya, supporting countless military coups and brutal repression by kings and dictators alike. Millions have died and tens of millions driven into exile. Biden is not seeking to alleviate the plight of those who have survived imperialist aggression but rather to add to the number of victims. He is devoting four days to intensive talks with the two most important US allies and client states in the Middle East. He has spent two days in Israel and will spend two more in Saudi Arabia, with the strategic aim of lining up the two countries behind the US-NATO war against Russia in Ukraine, while promising US support to their preparations for war against Iran.

There is also a brief side trip to Ramallah, which has more the character of a slap in the face to the people of occupied Palestine than an acknowledgement of their rights. In relation to the Palestinians, Biden has continued all the measures adopted by the Trump administration: the US embassy, moved from Tel Aviv by Trump, remains in Jerusalem; the US consulate in East Jerusalem, the main point of contact for Palestinians, remains closed; the Palestinian mission in Washington D.C. remains closed; the US continues to demand that the Palestinian Authority cut off all support payments for the families of those murdered by Israeli troops and settlers, which Israel calls “financing terrorism;” and the US has not changed the Trump policy of recognizing the legitimacy of Israeli settlements in the occupied West Bank, in violation of international law.

There is an overpowering element of imperialist hypocrisy in the Biden trip. The US government has been engaged for nearly five months in a war against Russia in Ukraine. It has poured in tens of billions of dollars in weaponry and deployed covert military forces. The claimed justification for this confrontation—which risks direct military conflict between countries possessing the world’s two largest nuclear arsenals—is that the United States is defending freedom, democracy and the right of self-determination of the Ukrainian people, as well as warding off a future Russian threat to America’s NATO allies. Yet this policy now leads the president of the United States to embrace two regimes that personify the very crimes that have supposedly justified the US intervention in Ukraine.

Turning to Iraq where Miss Moqtada al-Sadr's cult has turned out in Baghdad.

Sadr's supporters are chanting: "We listen to the orders of
@Mu_AlSadr
, not those who themselves get orders from #Tehran." #Iraq #Baghdad via
@truskesadeghi 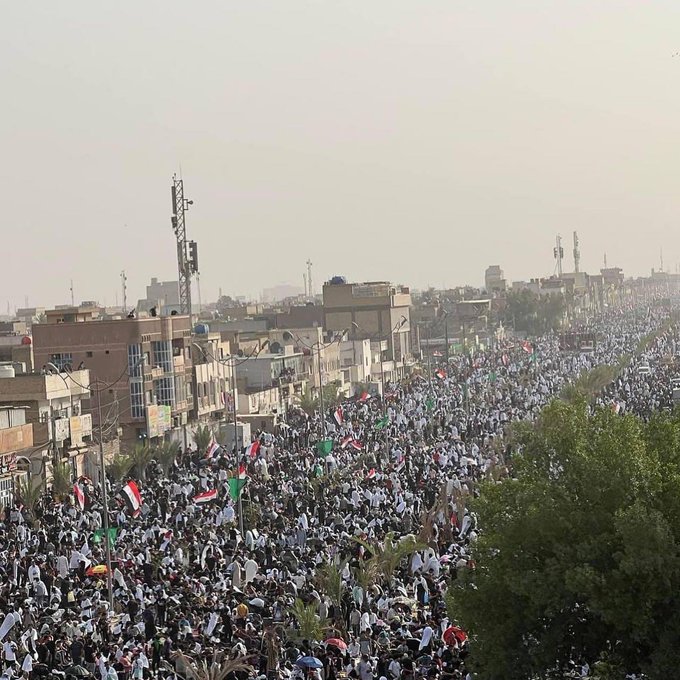 Moqtada is still upset that the government in Iran ordered him out of the 'kingmaker' role he was failing at.  October 10th, Iraq held elections.  The western press tried to redeem Moqtada on behalf of the US State Dept (who bribed Moqtada in August to endorse voting in the elections) who saw him as their way to keep Nouri al-Maliki out of power.  The western press ignored Nouri and refused to mention his name in the lead up to the election and in all the time that followed.

They lied and said Moqtada was a ''kingmaker."  Three times a vote was called in Parliament and three times it did not take place.  Moqtada's never accomplished anything so thinking he was going to name the next prime minister was always doubtful.

But even Moqtada had to wake up to some reality.  Now the Coordination Framework is pursuing the formation of a government and Moqtad and all his MPs are left out in the cold.

Amid the Maliki-Sadr escalations, Tishreenis remind us the role Sadr played in violence against protestors. #Iraq
5:44 AM · Jul 15, 2022

Moqtada had to pull from other provinces for the 'protest.'  Interesting because he was once able to turn out a larger group from Sadr City alone.  Those days are gone.  Equally true, the term "protest" was not used because his cult was leery of it.  Moqtada had to call it a ''national prayer."  January 24, 2020 had a much bigger turnout.

IRAQ: Tomorrow, a mass prayer is expected in Sadr City in support of the Sadrist movement, who recently got out of parliament in protest of difficult government formation negociations, as a show of force. 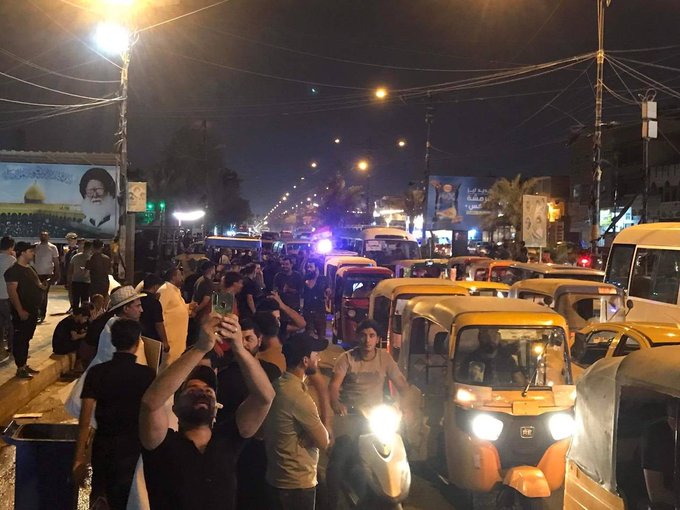 Again, he's managed much bigger crowds in the past.  And didn't have to pull from other provinces.

Isaiah's THE WORLD TODAY JUST NUTS "He Can't Run Again But He Can Scoot!" went up last night.  The following sites updated: