Grenfell: The victims of economic terrorism

Rita Ora‏Verified account @RitaOra  Jun 14
Shocked and devastated to hear this terrible news. My heart goes out to everyone affected by this horrific tragedy in west London 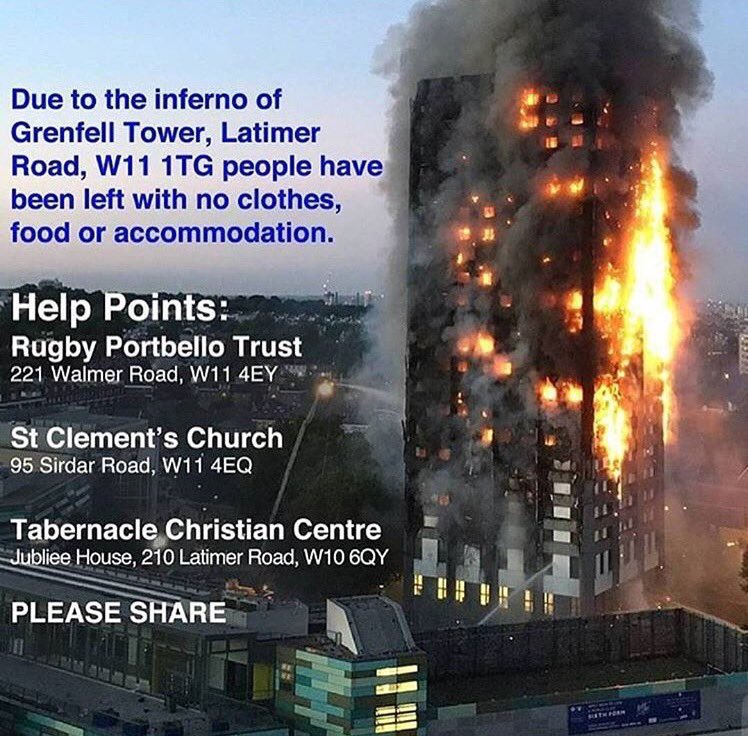 
The world is paying attention.

What happened is terrorism, don't be fooled.

The people of Grenfell Tower are the victims of economic terrorism.

Shock and horror has boiled over into raw anger and fury. Thousands protested in London Friday to demand justice and the punishment of those responsible for mass murder in the worst housing fire in modern British history.
Hundreds chanting “We want justice” for the victims of the Grenfell Tower inferno surrounded Kensington Town Hall, London to demand answers from council officials who had barricaded themselves in the building.
Prime Minister Theresa May while visiting Kensington was forced to remain in a church and was then chased away—surrounded by a heavy security detail—with protesters booing and shouting “shame on you” and “coward.”
This sentiment finds its echo throughout Britain and worldwide.
Millions are horrified by the loss of at least 100 and as many as 150 lives of working class residents in Wednesday’s fire.
Most shocking of all, this took place in Kensington and Chelsea, Britain’s richest borough in one of the richest cities in the world. But like so many other areas of the capital, extreme wealth exists side-by-side with extreme deprivation.

Kensington and Chelsea is one of the most socially divided areas of London, with those living on the Lancaster West Estate, where Grenfell Tower is located, in clear view of the homes of multi-millionaires and billionaires. The most expensive street in the country, Victoria Road in Kensington, has an average house price of £8 million.

One marcher, Rydar, told Socialist Worker, “People are pissed off. They had a disabled woman on the 21st floor. The stairwell's supposed to protect people from smoke but people died there.
“How are you going to spend £10 million on refurbishing the tower but didn't install fire alarms?

“I got evacuated. They put me, my mum, dad and two sisters on the street. It's a good thing we had my nan's house to go to.”


Local activist Niles Hailstone told Socialist Worker, “Our lives are expendable to the people in power. Poor people are the ones that lost their lives—we always take the brunt.

“Serious questions need to be asked of people in KCTMO and the council.”

These people are the victims of economic terrorism.

Someone needs to answer for it.


Reading his column at THE HILL, it's hard to figure out whether he's stupid or dishonest?


ISIS is more in the news than the Iraqi government so he may be using them -- and lies -- to make a case.  If so, it may attract more eyeballs for being 'trendy' but it will also attract many eyeballs from the heads of people who get that Soro doesn't know what the hell he's writing about.


ICE and US President Donald Trump must not return Iraqi Christians to Iraq, he argues, because the will face the Islamic State.

Yes, they've been victimized in the rare areas of Iraq that the Islamic State has grabbed control of in the last few years.

But stop pretending that's it.

The Iraqi government has failed them and has persecuted them.

They have passed laws against them, the forces have raided their bars and establishments to shut them down even when the law wasn't on the Iraqi forces' side.


The Islamic State is a recent thing in the long war.  It will likely be replaced by something else.

The same can't be said of the Iraqi government where thug Nouri al-Maliki was replaced by thug-lite Hayder al-Abadi.

The exodus of Iraqi Christians from Iraq begins long before the emergence of the Islamic State (as did the relocating to northern Iraq from Baghdad).

Is the Bishop a liar or just stupid?

The Iraqi government's history since the 2003 US-led invasion is one of persecuting religious minorities -- this includes Christians.

So why would you force Christians to return to that country?

That's the argument you make.

You rest it instead on the Islamic State?

The minute The Mosul Slog finally wraps up, people shrug and say, "Well they're over, no reason the Christians can't be sent back now."

The Bishop had a column to make a case and he didn't.

Instead, he's put out the highly damaging notion that, were it not for the Islamic State, Iraq would be a fine place for Iraqi Christians to live.


But the Islamic State did not run them off from Baghdad.

It wasn't the Islamic State, either, that reduced Baghdad's Jewish population to one elderly person.

Good, because it's already been 240 days.


Though the operation to liberate or 'liberate' Mousl was only launched in October, Mosul was seized
by ISIS in June 2014.

Nouri al-Maliki was prime minister then.

Some have not forgotten that fact.

Demonstrators called for Maliki to face justice as they marked the third anniversary of the Speicher massacre where Islamic State (IS) militants killed hundreds of students at the Air Force base near Tikrit.
[. . .]
Banners listed the three “plagues” demonstrators believe Maliki is responsible for: the fall of Mosul, the Speicher Massacre, and the squandering of Iraq’s money.


Nouri and Moqtada al-Sadr are squaring off for upcoming elections -- whenever they might be held.

Provincial elections were actually supposed to take place in April.

They have been delayed until September but there's also a proposal to combine them with next year's national elections.