From victrolas to 8-tracks

Well I never claimed I could fill these posts out by myself, so here goes.  Or hear goes since this is audio tech.

When I was a very little girl, I got my first music device other than a radio.  It was a turntable.  It played 45s (singles), 33s (albums) and 78s (I had none of those).  It plugged into the wall.  It was a box that opened up and you put the vinyl record on the turntable and placed the arm with the needle on top of the record.  The speaker were these five or so holes on the right corner of the box.

I would listen to my records over and over.  My records were largely the ones an older brother had grown out of and passed on.  So they were rock and roll.  At my grandmothers, before she moved in with us, she had this huge victrola.  It played vinyl also.  But it did not run on electricity.  It had an arm/crank you put in the side and turned.  I never got to turn it.  I wasn't trusted.  Apparently, you could screw it up very easily.  So my grandfather or my grandmother would crank it.  I would hear "Tea for two and two for tea, Me for you and you for me" over and over.  I liked the song and it was one of the few 78s my grandmother had that I loved.

I got my first stereo later on.  Stereo was big because you had two speakers.  Ideally, it was two speakers playing different things from the same track.  That was true stereo.

So that was when I had a turntable.  It was black, so were the speakers and it had a black plastic cover for the turntable.  It also had an arm that allowed you to stack records.  That way, when one finished playing, the needle would lift off and go to the side and your next record would drop down, then the needle would go back over and begin playing the record.I used to stack vinyl by fours.  If I had five albums, it would sometimes drop more than one at a time.

I loved that stereo.

It would survive two solo apartments, one with a friend (female) and three with boyfriends.  A boyfriend broke it.  I wasn't living with him.  In fact, I was telling him I thought we needed to break up.  I had made a nice dinner to prepare him for it.  And I told him and he started throwing things.  He ran right to my stereo, lifted the turntable up and brought it down to the ground.  He then started breaking my vinyl over his knee as I frantically ran to a friend's -- a big guy, six foot and seven inches -- who lived next door and begged him to come over which he did and tossed the guy out.

Then my giant of a friend (Paul) told me, "Kat, you never break up in private.  Do it in public to avoid these messy scenes."  A lesson learned.

I had to get a new stereo and I went with components.  A turntable and an 8 track with radio.  Why 8 track.  A friend had a 4 track and we used to listen to it in the gym when we were refusing to participate in whatever the day's events were.  But I wasn't into tapes.

8 tracks were these cartridges with tape inside.  The plus was that they played over and over.  The minus was that it divided an album into fours and you were left with these breaks where there should not be breaks.  A song would start and you'd have to wait for it to flip to another track before you heard the rest of the song.

So how did I end up with this?

Gibsons was a department store and I had a friend who worked there and she said I could use her store discount.  So already I was going to spend more than I would have otherwise.  And I was sold on this because of the fact that the sales guy showed me how I could record off the radio.  And it sounded perfect.  Now I would miss a song's opening on most of my recordings.  But back then that was no big deal.

So I had that.  And since I had no 8 tracks, I bought some.  Not just blank ones but some recorded ones.  The recorded ones were cut-outs -- had a hole in them and were like 99 cents.  I got a Donovan Greatest Hits a Sonny and Cher and anyone else in the bin I remotely liked.  Oh, I got four Fifth Dimension albums.

So she gets there and she's probably 42.  She's rolling a joint while he's pretending to know how to install my stereo.  (She started smoking pot when her husband hooked up with another woman.)  And she's baked already.  So I figure out the wires -- no help from the boyfriend -- and put in the Donovan 8-track, a greatest hits.

The tape is fried.

My aunt, stoned, thinks it's the most amazing thing.  "I hear all these instruments."

Yeah because while "Sunshine Superman" is playing you can hear "Mellow Yellow" at the same time if you listen closely.  Those were all the instruments she was hearing, one track bleeding into another.

So I will continue this topic at a later date.  But, yes, before there were iPods and MP3s, there was other ways to listen to music. 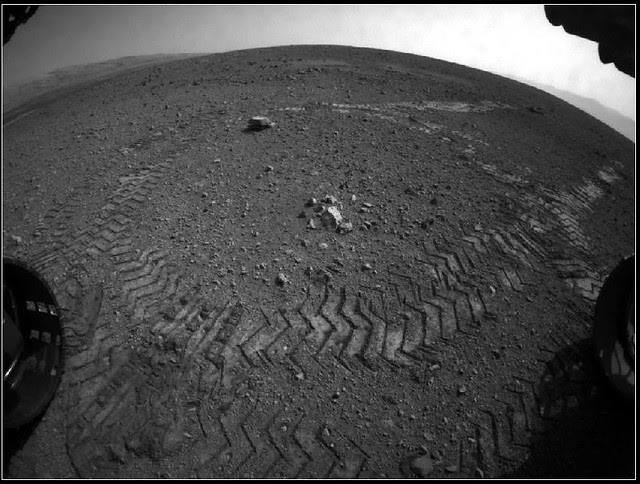 That's a photo of the surface of Mars.  Curiosity took it.  Curiosity is the land rover NASA sent to Mars.  If you read Betty's blog, you know all about Curiosity.  She called and said she's stuck with Jesse Jackson Junior's tawdry exploits and could I grab the latest on Curiosity?  Sure can.

First off, she's considered a "she."  And a lot of little kids see her as a person or beloved pet.  So call her a land rover or a she or Curiosity but don't dehumanize her around kids.  They love Curiosity and that's good because she can help us all learn so much and with kids that's a lifelong learning.  I can pick up a few tidbits here and there but a kid learning about Mars for the first time via Curiosity's work?  Where that little girl or boy ends their journey is unknown because it's really limitless.

Curiosity has already provided us with so much information.

If you're new to Curiosity, you can use these three links:


Today Mike Wall (Space.com) reports that Curiosity's done the first "radiation measurements" on the surface of Mars and it appears that astronauts could visit Mars and survive the radiation.  So see there's another discovery we have about Mars thanks to Curiosity.  (When I was a child, we called it "the red planet.")  Jonathan Amos (BBC News) reports:

Although no cameras have yet caught sight of them, it seems whirlwinds of dust have been skirting around the six-wheeled vehicle.
From the data gathered by Curiosity's meteorological station, scientists think dust-devils may even have run over the robot.
It is not entirely unexpected. Vortices of dust whipped up by the wind have been pictured by previous Mars rovers.
"A dust-devil looks essentially like what you would expect from the movies - a tiny tornado that is lifting dust," explained Manuel de la Torre Juarez of Nasa's Jet Propulsion Laboratory (JPL) and a scientist on the Rover Environmental Monitoring Station (Rems) instrument.


Ian O'Neill (Discovery) reports that this week, Curiosity was unable to transmit data for a brief period.  Why was it off-line?  Because it was conducting "a brain transplant"  It switched from the A-side of a computer to the B-side due to the A-Side "showing signs of age and recent troubles with the A-side's gyroscope".

So there are three things about Curiosity.  We've learned that humans could visit Mars and survive the radiation, that Mars has dust-devils and the Curiosity was able to switch to the other side of her brain.

And Betty would have made it all more interesting than I have.  But hopefully the news itself was enough to make you interested in Curiosity if you have not been paying attention to her before.