I'm excited by the Patti Smith book.  It's going to be entitled YEAR OF THE MONKEY.  This is from the Random House press release:


From the National Book Award-winning author of Just Kids and M Train, a profound, beautifully realized memoir in which dreams and reality are vividly woven into a tapestry of one transformative year.
Following a run of New Year's concerts at San Francisco's legendary Fillmore, Patti Smith finds herself tramping the coast of Santa Cruz, about to embark on a year of solitary wandering. Unfettered by logic or time, she draws us into her private wonderland with no design, yet heeding signs - including a talking sign that looms above her, prodding and sparring like the Cheshire Cat. In February, a surreal lunar year begins, bringing with it unexpected turns, heightened mischief, and inescapable sorrow. In a stranger's words, "Anything is possible: after all, it's the Year of the Monkey." For Smith - inveterately curious, always exploring, tracking thoughts, writing - the year evolves as one of reckoning with the changes in life's gyre: with loss, aging, and a dramatic shift in the political landscape of America.
Smith melds the western landscape with her own dreamscape. Taking us from California to the Arizona desert; to a Kentucky farm as the amanuensis of a friend in crisis; to the hospital room of a valued mentor; and by turns to remembered and imagined places, this haunting memoir blends fact and fiction with poetic mastery. The unexpected happens; grief and disillusionment set in. But as Smith heads toward a new decade in her own life, she offers this balm to the listener: her wisdom, wit, gimlet eye, and above all, a rugged hope for a better world.
Riveting, elegant, often humorous, Year of the Monkey is a moving and original work, a touchstone for our turbulent times.

Let me note 2 Tweets about Patti.

The New York Times‏Verified account @nytimes Sep 19
Patti Smith believes that when people close to you die, you absorb what you most admire in them. "It’s like they leave a little gift."
50 replies275 retweets1,366 likes 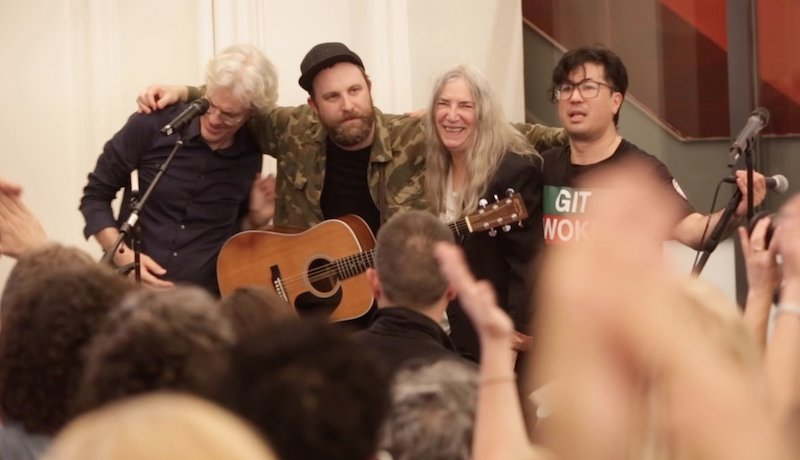 And here are two Tweets about Debbie.

In the United States, the race for the Democratic Party's presidential nomination continues.


Younger Black Voters to Their Parents: Break Up With Joe Biden, I’m Bored. An organic effort by black millennials and Gen Z-ers to influence older family members against Mr. Biden may be important in the Democratic primary. nytimes.com/2019/09/20/us/…
0 replies0 retweets0 likes


He's referring to Astead W. Herndon's report for THE NEW YORK TIMES.  The report fails to note that similar efforts took place in previous elections, including in 2008.  There was, for instance, "the great schlep" where voters were encouraged to get their Jewish grandparents in Florida to vote for Barack Obama.  THE NEW YORK TIMES' own reporting of that effort ran October 5, 2008 and was entitled "Sarah Silverman's Message to Your Grandma: Vote Obama."


For Mr. Biden, though, students carried mixed feelings. They respected his tenure as Barack Obama’s vice president, but implicitly rejected his campaign’s central premise, that the primary goal of Democrats in the 2020 election should be defeating President Trump.
They pointed to systemic problems they said the country must address, such as inequality, climate change and gun violence. The Democratic nominee, they said, should embrace progressive proposals like canceling student loan debt, the Green New Deal and gun buyback programs.

As a voter, you are much more likely to be influenced by someone you know and face-to-face contact is always stronger than any other.  The efforts these activists are undertaking will have some success.  It could be a huge success depending upon how much effort is put into the action.

Joe Biden wants to lead.  But when has his leadership ever been a good thing?  In last week's debate, Bernie Sanders noted the reality of Joe's 'wisdom.'

Sen. Bernie Sanders to Joe Biden: "The big mistake, the huge mistake, and one of the big differences between you and me: I never believed what Cheney and Bush said about Iraq." "I voted against the war in Iraq, and helped lead the opposition." abcn.ws/DemDebate #DemDebate
/>
1:39
Video
ABC News
106 replies493 retweets1,725 likes

.@BernieSanders "One of the big differences between you (Joe Biden) and me. I never believed Bush and Cheney on Iraq." #ABC13DemDebate
8 replies243 retweets1,327 likes

Justice Democrats‏Verified account @justicedems Sep 13
"Iraq is the biggest foreign policy disaster of at least the past 45 years. Bernie Sanders was completely right about it. Joe Biden was completely wrong. That is something to hammer him over and over again."
24 replies113 retweets509 likes

1:04
Silvers4Sanders @Silvers4Sanders
Bernie Sanders has a very different vision for the future than Joe Biden and so do we! #BernieYellsForUs #DemDebate
3 replies78 retweets183 likes

NPR Politics‏Verified account @nprpolitics Sep 12
Joe Biden and Bernie Sanders went back and forth on Biden's support for the war in Iraq. n.pr/2UP0CKY

SaltedBone‏ @SaltedBone Sep 12
#RT @BernieSanders: I never believed Cheney and Bush. Unlike Joe Biden, not only did I vote against the Iraq War, I led the fight to prevent it. #DemDebate
0 replies0 retweets0 likes


Joe's never shown real leadership.  But now, at 76, Joe swears, if you give him a chance, he's finally ready to show leadership.

Robin Justice‏ @welcomewords Sep 13
Biden is Clinton 2.0. Elite uber wealthy politicians who voted for the Iraq war & sat for #standingrock. If @JoeBiden truly cared about Americans, he’d drop out. You had your time. Pass the torch to someone who can lead us out of this darkness. #BernieSanders
0 replies0 retweets2 likes


It is wedged between Saudi Arabia to the south and Iran to the east and hosts thousands of U.S. troops on its soil. At the same time, powerful Shiite paramilitary forces linked to Iran pose a growing challenge to the authority of the central government.
As the pressure mounts, divisions within Iraq’s pro-Iranian factions have burst into the open, threatening to collapse a fragile government coalition and end a rare reprieve from the violence that has plagued the country for years.
“Regional challenges facing Iraq will make it even more difficult for Adel Abdel-Mahdi to bring the (militias) under control,” said Randa Slim, a senior fellow at the Washington-based Middle East Institute, referring to Iraq’s prime minister.
The divisions among Iran’s Shiite allies in Iraq have been spurred by a spate of airstrikes blamed on Israel that have hit weapons depots and bases belonging to the Iran-backed militias, known collectively as the Popular Mobilization Forces, or PMF.

Why isn't Joe asked every day about how to address Iraq?  He voted for the war that destroyed the country.  That alone should make him responsible for coming up with solutions.  He can't stop bragging that Barack Obama tasked him, as vice president, to deal with Iraq.  If he wants to brag about that, he needs to be asked about that.

He claims today that Bully Boy Bush tricked him into supporting the Iraq War.  Is Bush still tricking him?  Is he tricking Joe into silence?

Joe needs to stop his folklore stories and start addressing reality.  If the press isn't up to demanding that from him, they just need to admit that they're worthless.