Alicia KeysVerified account ‏@aliciakeys  Nov 13
I'm learning it's important to feel & learn from all sides of your emotions—even sadness has something to teach you! https://www.instagram.com/p/BMweDC6B1iZ/


That's Alicia Keys.  Her album HERE is amazing.  My review is "Kat's Korner: Alicia's here, there and everywhere."

You will love it as well.

Give it a chance and it will possess you.

At THIRD yesterday, we talked music "Music talking with Kat" -- including Alicia Keys.

Make a point to check it out.


Day 7, American celebrities in shock that the election didn't go their way because they're so uninformed and poorly educated.


Take Minnie Driver.  When not calling herself a Darwinian feminist (religious fervor over science apparently led her to forget that feminism is not about survival of the fittest), Minnie stars in ABC's lowest rated program.  Tim Allen's LAST MAN STANDING airs on the death night that is Friday but still managed, first week in November, to pull in 6.26 million viewers (November 4th).  On the much more popular Wednesday night, Minnie pulls in five million.  Even MODERN FAMILY can't prop up Minnie's show.

Oh, Minnie, you're so deeply stupid.  (Guess everything Chris O'Donnell's been saying about you for years is true!)

THE GUARDIAN is the bible, the party organ, for New Labour.

It didn't oppose the Iraq War.


From THE DOWNING STREET MEMO(S):


The Downing Street "Memo" is actually the minutes of a meeting, transcribed during a gathering of many of the British Prime Minister's senior ministers on July 23, 2002. Published by The Sunday Times on May 1, 2005 this document was the first hard evidence from within the UK or US governments that exposed the truth about how the Iraq war began.
Since that time, much more information has come to light through leaks of secret government documents and the accounts of an increasing number of people who have witnessed the administration’s wrongdoing firsthand.
There is now in the public record a large body of evidence that vividly illustrates:

Even as the Bush presidency winds down, a recent Senate investigation final report shows how the administration manipulated information to overstate the WMD threat and conjure up a connection between Saddam Hussein and Al Quaida that did not exist.
A majority of the American people now believes that the president intentionally misled our nation into war, and many more believe the sacrifice made in Iraq has not been worthwhile. This web site is intended as a resource to document the truth about how we were misled into war, so that we might avoid such a mistake in the future.


Remember the outrage in this country over the Downing Street Memos and how US press wouldn't cover them?

Fun fact, THE GUARDIAN of England wouldn't cover them either.

THE TIMES OF LONDON, a paper owned by Rupert Murdoch would cover them -- and, in fact, broke the story on them.

But THE GUARDIAN wouldn't cover them.


Not seeing how that translates to Minnie's "fearless" -- let alone "independent" -- media.

They also don't do a great deal of reporting at the paper.

But they did have Martin Chulov writing some rather innocuous reports from Iraq.

And when thug Nouri al-Maliki sued the paper, they freaked.

Instead of standing by Chulov and using the paper's full power to telegraph to the world what a demon and despot Nouri was, they pulled back.

As they always do.


As US President Barack Obama himself would finally admit in the summer of 2014, Nouri was responsible for the rise of the Islamic State in Iraq.

THE GUARDIAN never had the guts or strength to do the same.

For Minnie, the answer to the issues of media is for people to pour their money into a paper that's nothing but a partisan party organ.

There's no greater waste in the world than pouring money into THE GUARDIAN.

If you wanted to support media, you could start with THE INTERCEPT which breaks news stories.

And, let's remember, when the British government said "enough" on the Ed Snowden revelations, THE GUARDIAN, as it always does, caved.

Minnie, stick to bad acting, you're so much better at delivering wooden performances.


28 days after the Mosul liberation or 'liberation' effort began and Mosul's still not liberated or 'liberated.'


It's not a slog, Elise Labott of CNN screamed out "NO!" in the middle of a State Dept press briefing when another reporter -- silly Arab who thought he had a right to speak when the all important Elise was present -- asked if it was "a slog."

It's 28 days and counting but it's not a slog and don't you call it one or Elise will wrestle a gator and bite the head off a bat before she comes gunning for you.

A group of attackers armed with suicide vests and light weapons killed at least six people southwest of Baghdad on Monday, local officials said.
The attack claimed by the Islamic State of Iraq and the Levant (ISIL) group in Ain al-Tamer, involved six suicide bombers, some of whom may have been killed by security forces before they could blow themselves up.

Masum al-Tamimi, a member of the Karbala provincial council, said that the six attackers tried to infiltrate Ain al-Tamer village early in the morning.

Meanwhile the US Defense Dept announced this morning:


Strikes in Iraq
Attack, fighter, bomber and remotely piloted aircraft and rocket artillery conducted 13 strikes in Iraq, coordinated with and in support of the Iraqi government:

How could so many be so wrong?

They got their news from the internet.  It had Hillary winning the election easily.

How could it have been wrong? 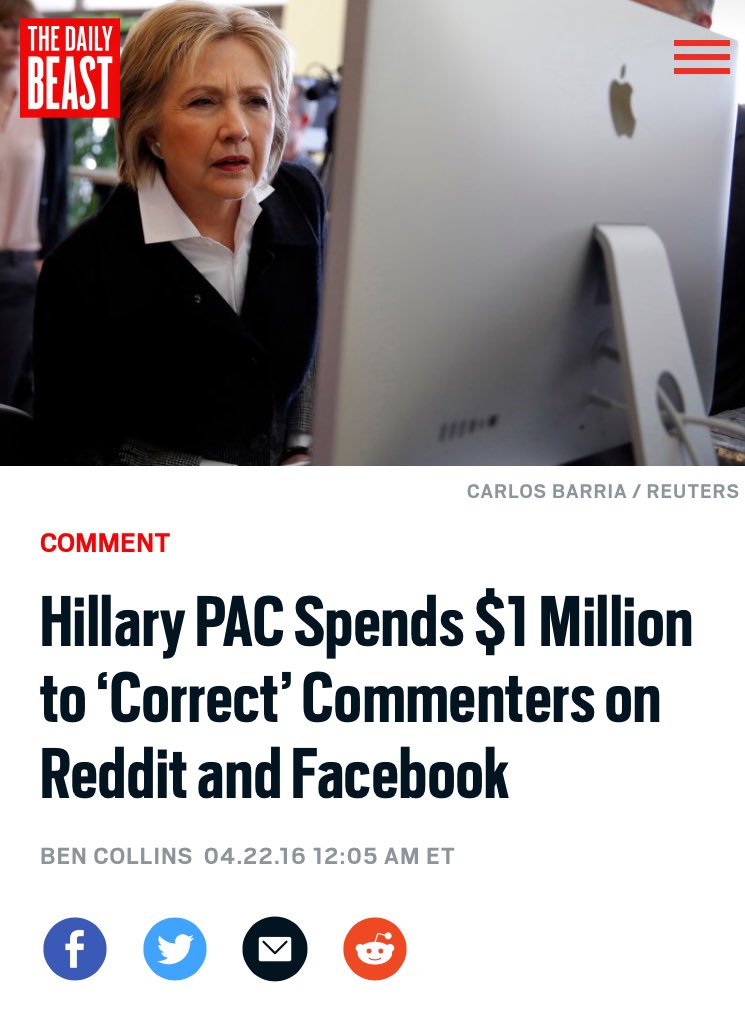 
Maybe next time your online, you realize these new voices popping up are not to be trusted, are not real and are paid off.

Clintonistas did what Barack's campaign did in 2008 -- but, as usual, they bungled it.


THE NEW YORK TIMES is responsible for this.  They knew, in 2008, after we exposed it to several editors, that the popularity Barack had online over Hillary in the paper's comments had a lot to do with fake people, people paid to assume multiple identities to make Barack look more popular than Hillary.

Hillary can't call out a dirty trick, she can only store it away to run with another day.

So the internet effect that lulled so many to sleep this go round?

It was people paid by the campaign.

And the campaign was so stupid, it spent more money paying fake people than it did trying to recruit real Latino voters.

Fakes can be multiple people online but, in the real world, they still only get one vote.


Hillary was supposed to win the election (she didn't) and you have to wonder how?

In England, the Labour Party's years of domination have disintegrated over the Iraq War.

Every time Labour starts to rebuild and polls a little better, War Hawk Tony Blair slips out from underneath his rock and the party crashes again.

One poll after another has told Labour they have to bury Tony to retake control of Parliament.


But somehow, in the US, Hillary's support for the Iraq War wasn't supposed to matter.

Somehow, the fact that she called her vote and her support a mistake (a mistake, she insisted, because she thought Bully Boy Bush would send more troops in) was supposed to mitigate her actions.

I find it interesting, by the way, all the whiners on Hillary this go round.

She got more votes than Trump!

Yeah, well, did you not know how the electoral college works?

Where was your chest beating and wailing then?


Kat's "Kat's Korner: Alicia's here, there and everywhere" went up Sunday and this is the new content at THIRD: