In a year that has included team meetings, midseason trades and an ailing head coach, LeBron James has spurned rest and instead suited up for every regular-season game. He's on track to play all 82 games for the first time in his career, and he's doing it at a level that has garnered plenty of MVP discussion.
If he is willing to deviate from the plans of seasons past, would he be willing to deviate from his standard postseason routine of unplugging from social media?
No chance, said The King in advance of the Cavs' final regular-season game against the New York Knicks.


That idiot Gus Kenworthy blew his game by Tweeting when he should have been focused.  He didn't take a gold or even a silver and that's on him.  If you're new to Kenworthy, check out Ava and C.I.'s piece on the winter Olympics.

You have to unplug.  You have to focus.  LeBron's a champion not just because of talent but also because of determination and focus. 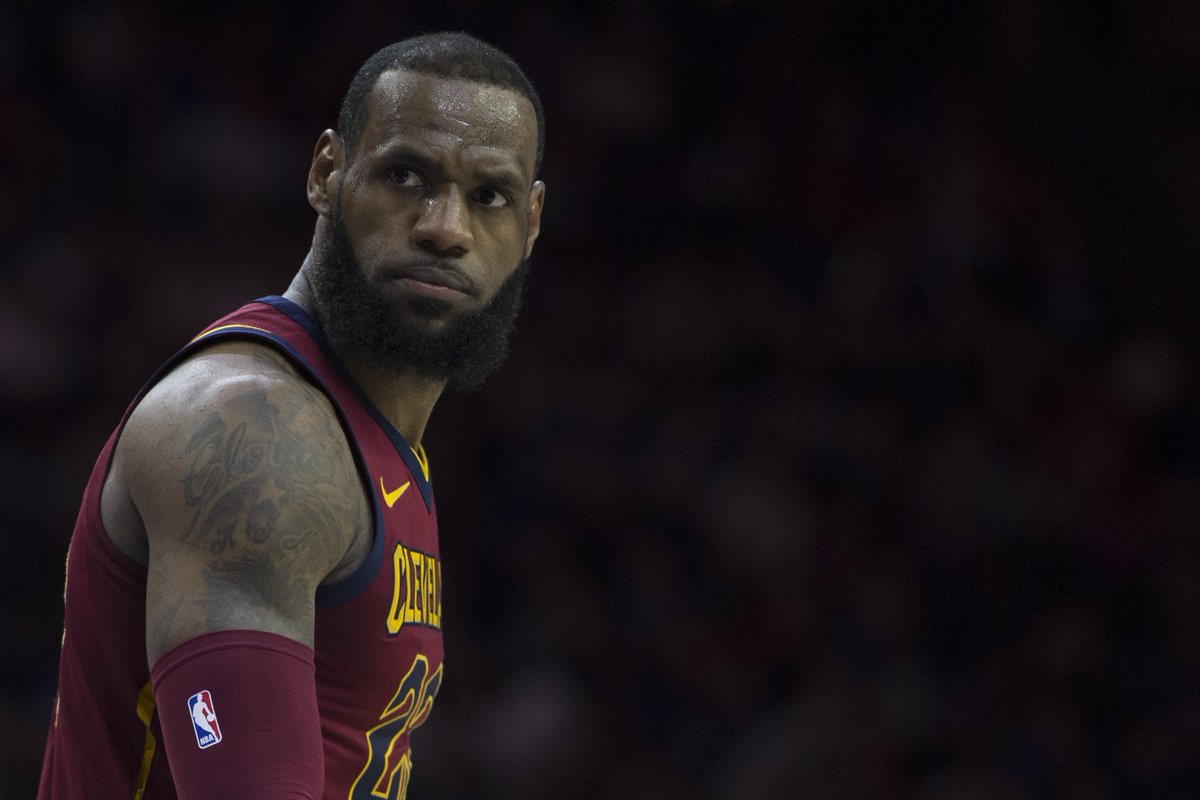 
Courts may not hold War Criminals accountable, but the people can.

We’re going to surprise Madam Secretary at her Brooklyn appearance. Follow this thread for the action

Third disruption: Our comrade stepped up and told @madeleine she should go to jail for murdering 500,000 Iraqi children. #USoutofeverywhere
2 replies53 retweets148 likes

Fourth disruption of @madeleine’s #fakenews book tour. War criminals ought to be tried in the @ICC. #USoutofeverywhere
3 replies27 retweets61 likes

Fifth and final disruption of @madeleine’s atrocious talk! Ask her why she bombed innocent Yugoslavians in the 1990s. #USoutofeverywhere
5 replies30 retweets78 likes

Feel free to organize your own disruption! We can't let these warmongers have a platform or peace of mind! Call these criminals out where you see them!

"You killed half a million Iraqi children!" someone screams at Mad Maddie Albright.  "You have blood on your hands!"

"I do actually believe in free speech," Mad Maddie declares as the first protester is led away.  That's a War Criminal for you, speak up for free speech only after your security team has removed anyone you think might speak freely.  She gives up that supposed belief once she realizes more than one protester remains present.

To this protester, Mad Maddie says, "I respect your right to talk.  I would like you to respect mine."  But what of the half a million Iraqis who can't respond, who can't speak because you killed them Madeline with your sanctions?  Sanctions you later insisted were appropriate.  When questioned by Lesley Stahl for 60 MINUTES, you infamously said, "We think the price was worth it."

She goes on to insist that "people came here to listen to me and not you."

No one should listen to Mad Maddie except the guard who slides her meals through the opening in her cell.

"You're a War Criminal who should be in jail!" insist the protester in the third clip.  Some of the assembled whine, "Get out!  Get out!" because they're Team Maggie which means there's a special place in hell for them right to next to Mad Maddie.


These disgusting people get even more upset in the fourth video and steal the banner from the protester who insist "You're a War Criminal."

In the next clip, a protester calls her out for the 500,000 Iraqi kids she's killed.

"I could spend a lot of time explaining what happened in Iraq," Maddie says in a bored tone.  Really?  Why don't you start off by explaining how you made money off of the Iraq War in 2003?  It wasn't just James Baker that Naomi Klein was reporting on.   You're a whore Maddie, you always have been, you always will be.  Get back to your brothel, you public menace.

The disgusting trash assembled goes on to giggle with Maddie.

They're probably the same type that is outraged when an American child is killed.

Excuse me, they're probably the same type that is outraged when a White American child is killed.

But they think the deaths of 500,000 children is a funny joke as long as those children were Iraqi.

It's campaign season ahead of the May 12 elections and, if you doubted that, enter Zainab Arif Basri.  ALSUMARIA reports Basri has castigated Prime Minister Hayder al-Abadi for not realizing elements of ISIS and the Ba'ath Party are both working in jobs with the Iraqi national intelligence.  The proof?  No proof, just more baseless charges from Basri.  Basri is demanding that Hayder immediately address this situation.  Not noted in the report, Basri belongs with who?  That's right, it's a Nouri al-Maliki flunky.  Basri is a member of former prime minister and forever thug Nouri's State of Law.  Basri last got major attention in Iraq last year by insisting Nouri would return as prime minister.  These baseless charges are part of Bari's efforts to ensure that happens.

Chatham House‏Verified account @ChathamHouse 21m21 minutes ago
'Many Iraqis now see corruption as just as bad as terrorism, and the gap between elite and citizen has become more important than the gap between Sunni, Shia, and Kurd' - Iraq's allies must question status quo ahead of elections in May, says @renadmansour
0 replies6 retweets9 likes

Mina Aldroubi (THE NATIONAL) reports that Iraq's Vice Presdient Ayad Allawi stated that the crises (plural) in Iraq will not be resolved by the elections, that Iraq has to go beyond sectarian division and move towards inclusion as well as step away from foreign interference.


Prominent Iraqi Shia cleric and opposition leader Muqtada al-Sadr has declared his willingness to mediate between Saudi Arabia and Iran with a view to mitigating tensions between the two regional powerhouses.
The offer came in a Tuesday statement issued by al-Sadr's office in response to questions regarding the possibility of an Iraq-brokered “reconciliation” process between Iran and Saudi Arabia.

Moqtada is the Shi'ite cleric and movement leader whose party will most likely elect MPs in the double digits this election if past elections are any indication.  THE NATIONAL reports that he has also declared that Iraq is not be working with Turkey to confront the PKK despite the claim of the Turkish government that they have an agreement with the government of Iraq on this.