I would love to see that Tweet plastered all over the internet.  It really says it all.

First off, GirlBye or whatever her name is.  In Friday's snapshot, we called her out for a piece she put her name to at DINAR DAILY.  Guess what?  She didn't write it.  That may actually be worse.  A stupid person could write something like that and be too close to it to grasp how stupid it was.  (Saying that Basra protesters should just learn to wait on their demands -- which includes drinking water that won't leave them hospitalized -- is the epitome of stupidity.)  Equally true, posting writing without crediting the writer sounds like plagiarism.  The article was actually written by propagandist Hussain Abdul-Hussain who wrote it for ASIA TIMES and it's nice that he's found somewhere else to work besides US propaganda outlets (ALHURRA).

Turkey has conducted a new wave of airstrikes in northern Iraq.
"7 separatist terrorists who were in preparation to assault our bases were neutralized in northern Iraqi regions of Gara and Hakurk as a result of airstrikes on Dec. 16," Turkey's National Defense Ministry said in a statement on Dec. 17, referring to the illegal PKK.


The PKK?   Aaron Hess (INTERNATIONAL SOCIALIST REVIEW) described the PKK in 2008, "The PKK emerged in 1984 as a major force in response to Turkey's oppression of its Kurdish population. Since the late 1970s, Turkey has waged a relentless war of attrition that has killed tens of thousands of Kurds and driven millions from their homes. The Kurds are the world's largest stateless population -- whose main population concentration straddles Turkey, Iraq, Iran, and Syria -- and have been the victims of imperialist wars and manipulation since the colonial period. While Turkey has granted limited rights to the Kurds in recent years in order to accommodate the European Union, which it seeks to join, even these are now at risk."


Today's bombing is thought to be the first bombing since Iraq's Foreign Affairs Ministry released a statement last week:

Statement
The Foreign Ministry summoned the Turkish Ambassador to Baghdad Mr. Fatih Yildiz and handed him a letter of protest over the repeated air violations by Turkey. The Ministry denounces the actions of Turkish aircraft that violate the Iraqi airspace and target several sites in the areas of Mount Sinjar and Makhmour in northern Iraq, which caused loss of life and property.
Such acts violate Iraq's sovereignty and security of citizens and are unacceptable on all levels, contrary to the principles of good-neighborliness that bring together the two countries. The Foreign Ministry also reiterates its refusal to use Iraqi territory as a base or a corridor to carry out acts that effect  the security of neighboring countries , and calls on the Turkish side to abide by this in order to maintain the friendly relations between the two countries.
Media Office
Iraqi Foreign Ministry
14/12/2018


Despite the clearly worded statement, the government of Turkey shows no indication that it will respect Iraq's sovereignty or the security of its citizens.


Self-appointed 'leader' Nadia Murad Tweeted over the weekend the following.

Nadia Murad‏Verified account @NadiaMuradBasee 15h15 hours ago
Met w/minister @MevlutCavusoglu to dicuss the recent Turkish airstrikes in Sinjar. Turkey & Iraq must work together to find a solution to prevent any further bombings in Sinjar. We want to rebuild what ISIS destroyed & help Yazidis return home. 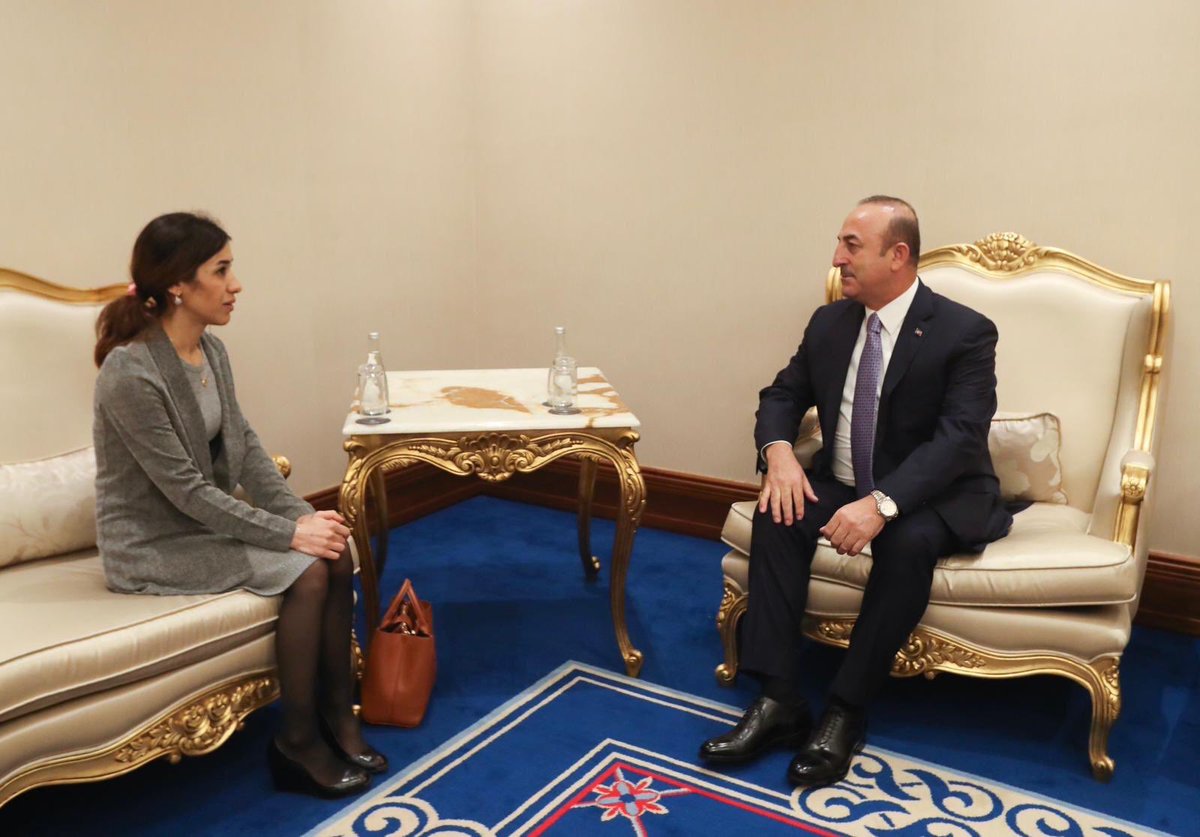 
And here's the Tweet from the Turkish official she met with. 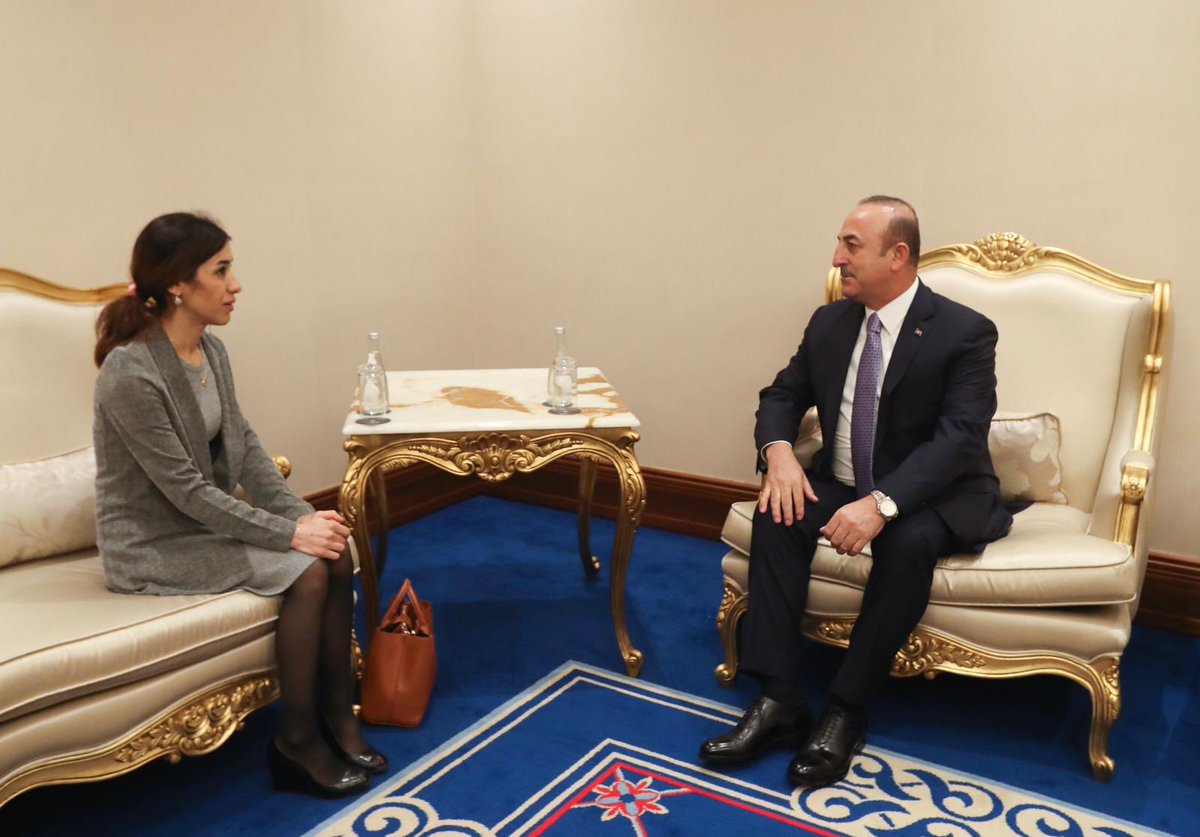 
Though they both use the same photo, they don't both mention Turkey bombing Sinjar.  Did she actually bring the topic up? Maybe, maybe not.  If she did, he didn't find it worth mentioning.


The press (western press) seldom finds it worth mentioning that these strikes kill a lot of civilians -- terrorists, not so much.


Among those killed in Turkish airstrikes in Iraq last night were a 73 year old woman and a 14 year old teen, Rudaw reports. This may explain the strong Iraqi government protest against Turkey today
1 reply1 retweet0 likes

Aaron Magid‏Verified account @AaronMagid
The Iraqi government's strong protest against Turkey on Friday for "violating its sovereignty" did not deter Turkey who continued its airstrikes in northern Iraq on Sunday
4:59 AM - 17 Dec 2018
0 replies0 retweets0 likes


Okay, we need to talk about another topic war related before I get another phone call from a friend.  At THIRD, Ava and I cover the media and, in a perfect world, this topic would have been addressed there.  But we wrote two pieces for this week's edition and didn't have time for a third.  MURPHY BROWN.  The CBS sitcom has been a nightmare in its revival.  I loved the original MURPHY BROWN and consider the episode "And So She Goes" from season one to be a TV classic.  The revival has been awful.  One of the main reasons, as Ava and I noted after viewing the first episodes, was because no one had a life -- twenty years later, the show re-emerges and no one's become a parent, no one's got married, no one's had any professional accomplishment, nothing happened.  And instead of developing characters, we got preaching and screaming.  My friend with the reboot is about to hit the roof, I'm sure.  There's a "but" coming.  But on the Thanksgiving episode, things finally came together.  Whether you agreed with the POV of the episode (I did) or not, it was an actual episode, not a lecture.

Another topic?  Last week's episode of MURPHY BROWN found Murphy noting that no one paid attention to the Afghanistan War (it ended with Avery heading off to Afghanistan to report).  The war kept going on year after year and where was the media, Murphy, Corky and Frank wondered?  They talked about Vietnam, about how reporters were there and reporting what was actually going on.

If we had written about it at THIRD, we would have included this TWEET that posted on Friday:


The Iraq War and the Afghanistan War need to end -- all wars need to end (especially those that never should have started).  MURPHY BROWN wanted to be political but it didn't offer anything you couldn't already find everywhere else.  It did, on the Thanksgiving episode, leave the preaching to actually humanize the immigration issue (good job).  But with last Thursday's episode, it demonstrated that the revival was worth it for that episode alone.  No one is talking about Iraq or Afghanistan.  The media's not interested.  The politicians certainly aren't.  MURPHY BROWN offered a strong episode (written by Gary Dontzig and Steven Peterman).  It was nice to see them step away from easy targets and 'hot topics' to address something that actually matters and to do so with humor and care.

Let's bring this over to THE NATION.  An issue in POLLY'S BREW (community newsletter) is the lack of coverage in THE PROGRESSIVE and THE NATION of the Iraq War (or the Afghanistan War).  A number of community members have e-mailed about that on Saturday and Sunday.  I'd love to see coverage from both but let's face a few realities.

Ruth Conniff is now in charge of THE PROGRESSIVE.  It never did much on Iraq under Matthew Rothschild's leadership (he made many promises -- such as that he would cover the Iraq Veterans Against The War's public hearings -- and he never kept them).  The only thing worse than Matthew was Ruth.  As most of you will remember -- because it was so horrific -- Ruth went on KPFA and asked about the Iraq War blathered on in her airhead way that no one she knew had gone to Iraq -- thereby explaining that in the gated-community of her mind, the war just didn't matter.

Ruth Conniff has led the magazine from one disaster to another.  Supposedly, the circulation of the monthly magazine has dropped below 25,000 (it's highest was when it was covering Iraq in 2004, 65,000) so she's got that 'success' to claim.  There's also her 2014 failure (when she oversaw the merger of THE PROGRESSIVE and The Center for Media and Democracy -- a merger that didn't even last a year and left both sides wounded).  She's a failure and that's all she'll ever be.

But neither rag is going to cover Iraq.  They only do what the Democratic Party officials want them to do.  That's why Ruth Conniff attacked Ralph Nader in 2004, for example.  It's why she attacked Hillary in 2008 (with some really disgusting writing) and then turned around in 2016 and pretended like Hillary was her personal fave and always had been.  She's a whore, that's what Ruth is.  She needs the money from the Democratic Party and won't buck the establishment of the party.  THE NATION is a little better, not much.  Katrina could have led on the Russiagate nonsense.  And she should have -- it's her field of expertise.  Also it's her husband's field of expertise (and he did lead on it).  Katrina did allow some important pieces by Aaron Mate to be published.  But she always knew that stupid b.s. was b.s. Russia did not impact the 2016 election in any significant way.  No Democratic presidential campaign ever spent more on advertising so less than $20,000 in FACEBOOK ads is really laughable.  Greed, that's all we see these days.  Remember, it was Barack Obama who walked away from public financing of presidential elections.

So stop counting on them to cover issues that the Democratic Party establishment does not want them to cover.  The Democrats blew it on ending the Iraq War, they don't want voters reminded of that and both THE PROGRESSIVE and THE NATION depend on donors -- big money donors -- to stay in business.  Their circulation is laughable and they wouldn't  be in business without big money donations backing them.  (It's why Katrina killed the report on Dianne Feinstein's lack of ethics.)

THE WEEKLY STANDARD, thankfully, just died.  And that could easily happen to THE NATION and THE PROGRESSIVE (and maybe should).

Steve King‏Verified account @SteveKingIA 21h21 hours ago
.@RealDonaldTrump is right on The Weekly Standard’s deserved demise (“pathetic and dishonest”). If the articles targeting me were redacted until only truth remained, there would not be much left to read.
660 replies704 retweets2,321 likes

THE WEEKLY STANDARD walked away from the Republican Party as they flocked around their fellow neo-con Hillary in 2016.  As a result, they lost the money (donations) that kept the rag alive.  It never made it on circulation, these opinion journals never do.

Jon Schwarz‏Verified account @schwarz
By me: The 10 most appalling articles in the Weekly Standard’s short and dreadful life
8:14 AM - 16 Dec 2018
19 replies152 retweets361 likes

Fox viewers like to be lied to with short, simple words, while the readers of the Weekly Standard preferred to be deceived with multisyllabic lies interc.pt/2A0Ddgt 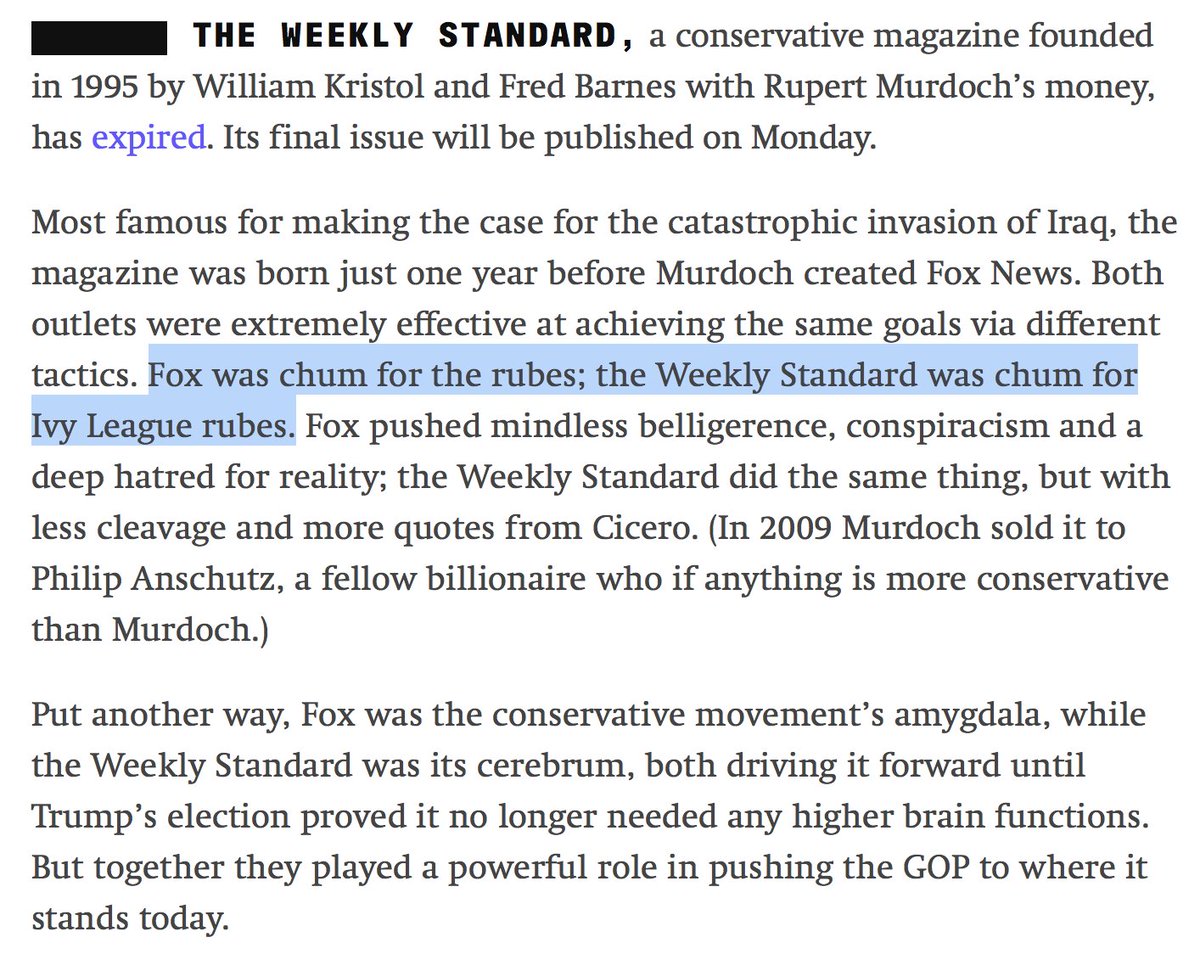 I can't urge you strongly enough to read this 2003 article by David Brooks in the now-deceased Weekly Standard. You will never find anything else that better illustrates the degree to which US elites had totally gone off the mental rails. interc.pt/2A0Ddgt 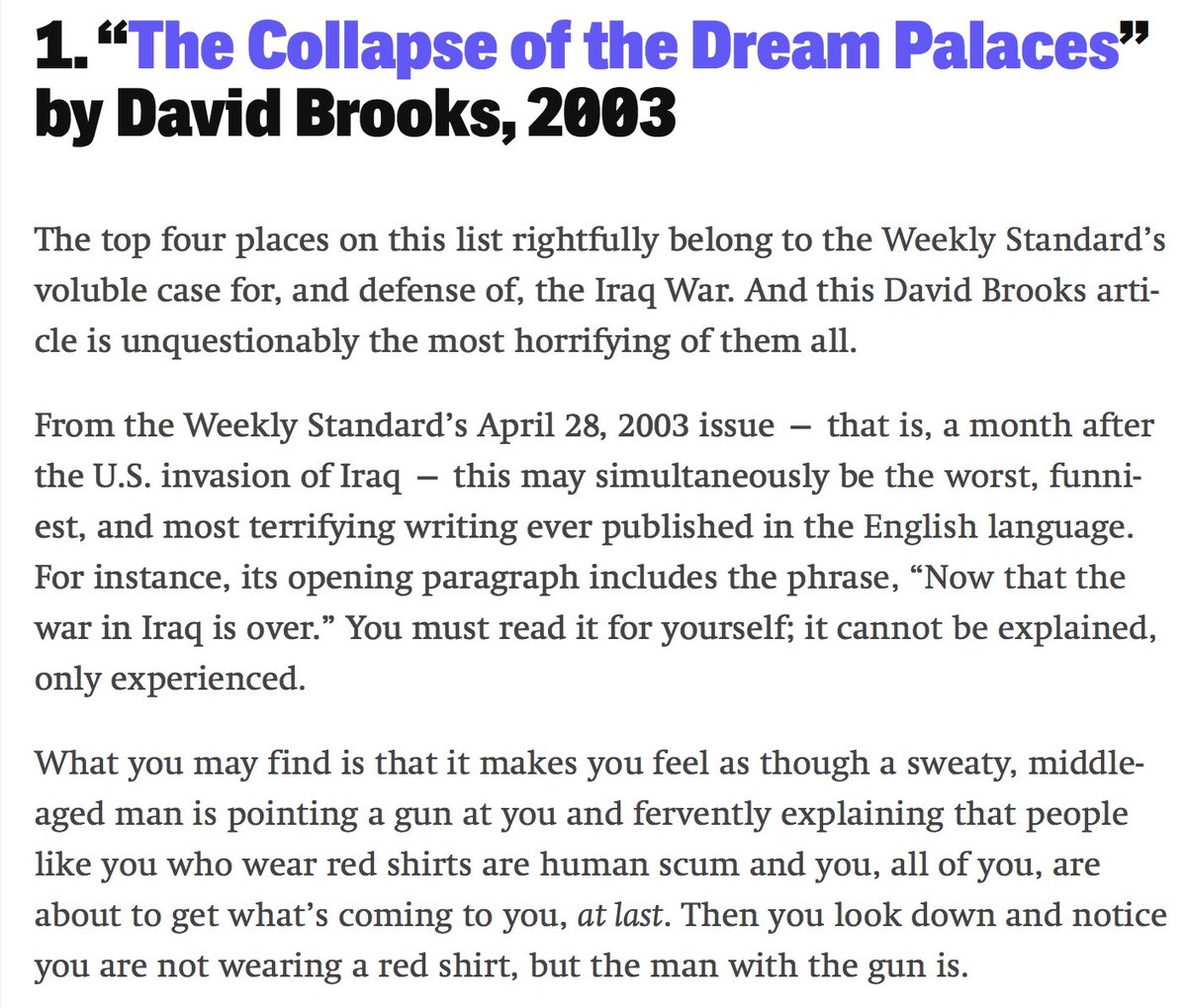 THE WEEKLY STANDARD sold the Iraq War, it's good that it's dead.  And let's note Oliver Willis because I always pick on him here but I do like his writing.

Read Oliver Willis' piece on the failure of THE WEEKLY STANDARD here.  And if THE PROGRESSIVE and THE NATION fail next, good.  Their silence on the ongoing wars is selling the wars.  Shame on them.

Ballots are due December 20th for the books that spoke to you in 2018.  Community wide, these are the reviews (I'm swiping from THIRD):


"I NEVER LOVED A MAN THE WAY I LOVE YOU: ARETHA FRANKLIN, RESPECT, AND
THE MAKING OF A SOUL MUSIC MASTERPIECE" -- Elaine.


"No one Peter Bogdanovich knows is ever gay" -- Marcia.


"IN SEARCH OF OUR MOTHERS' GARDENS" -- Elaine.

"Elaine Weiss' THE WOMAN'S HOUR: THE GREATEST FIGHT TO WIN THE VOTE" -- Ruth.

"Dancing with Demons: The Authorized Biography of Dusty Springfield" -- Marcia.