If Joe Biden announces next month that he's running for president, he better be prepared for what happens.

Not only will he likely not get the nomination, he will also destroy his reputation. 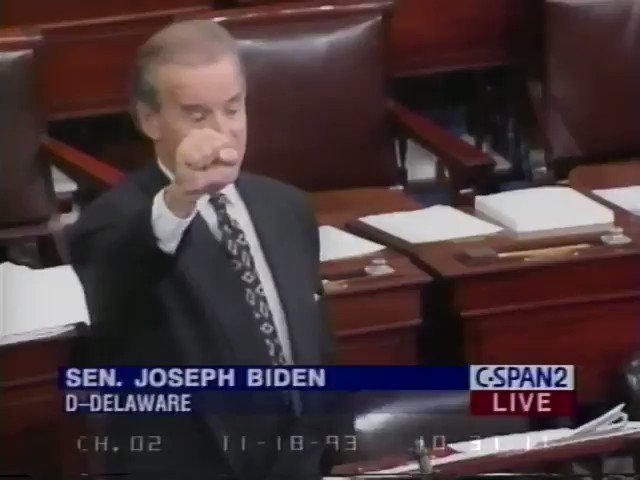 2:20
andrew kaczynskiVerified account @KFILE
NEW: Reviewing Joe Biden's record on crime we found a speech where he said "I don't care" & "it doesn't matter" what the root causes of crime are consensus is criminals needed to be immediately locked up because society…
Show this thread
54 replies272 retweets1,187 likes

"Uncle Joe" won't be as beloved when people start going through his actual record.

Thursday, March 7, 2019.  Truffles, corruption and more in Iraq while in the US three people seeking the Democratic Party's presidential nomination stand up against the attacks on US House Rep Ilhan Omar.

In the US, we have seen embarrassing and cowardly attacks on US House Rep Ilhan Omar who raised the issue of the way lobbies exert control in this country.  How bad was it?  So bad that now the corporate media -- who was part of the attacks -- try to clean up the mess with garbage like this. 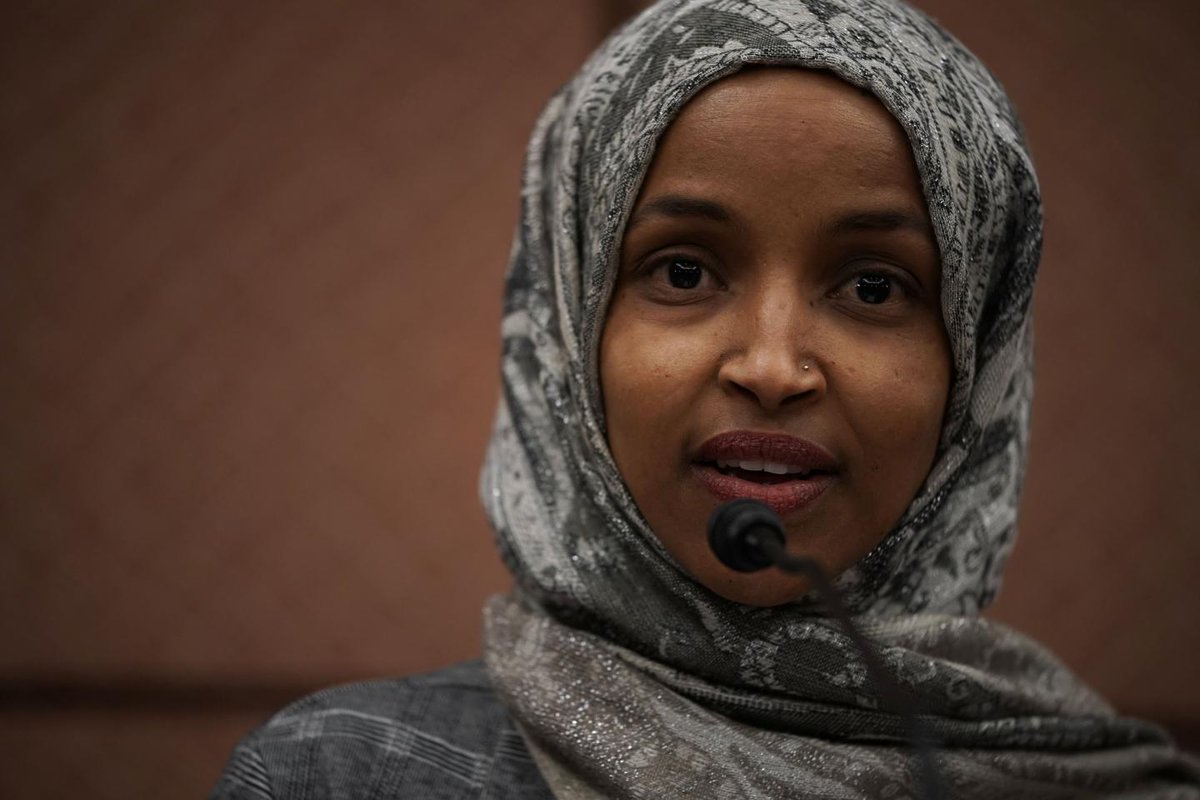 Jewish, not Jewish, what you are is a damn liar.  Yes, the GOP has attacked her but so have the Democrats.  Their plan was to publicly censure her.  They had to take a pause when they realized people wouldn't go along with it, We The People.


A pause.  They haven't stopped.  They're re-thinking.

For NEWSWEEK to pretend that the attacks on Ilhan Omar were solely from the GOP is the same sort of 'honesty' they provided when they destroyed Jean Seberg's life in the sixties by printing non-stop lies -- including that they had interviewed Jean, they hadn't.  Including that Jean was pregnant with someone other than her husband's child, printing that she was pregnant by a Black Panther.  They are the gutter of the press -- always have been and always will be.


In the last days, we needed leadership.  No surprise, Nancy Pelosi could offer none.  Speaker of the House or House Minority Leader, she's always useless.  What about others?  We have many seeking the Democratic Party's presidential nomination.  Anyone stepping up to show real leadership? 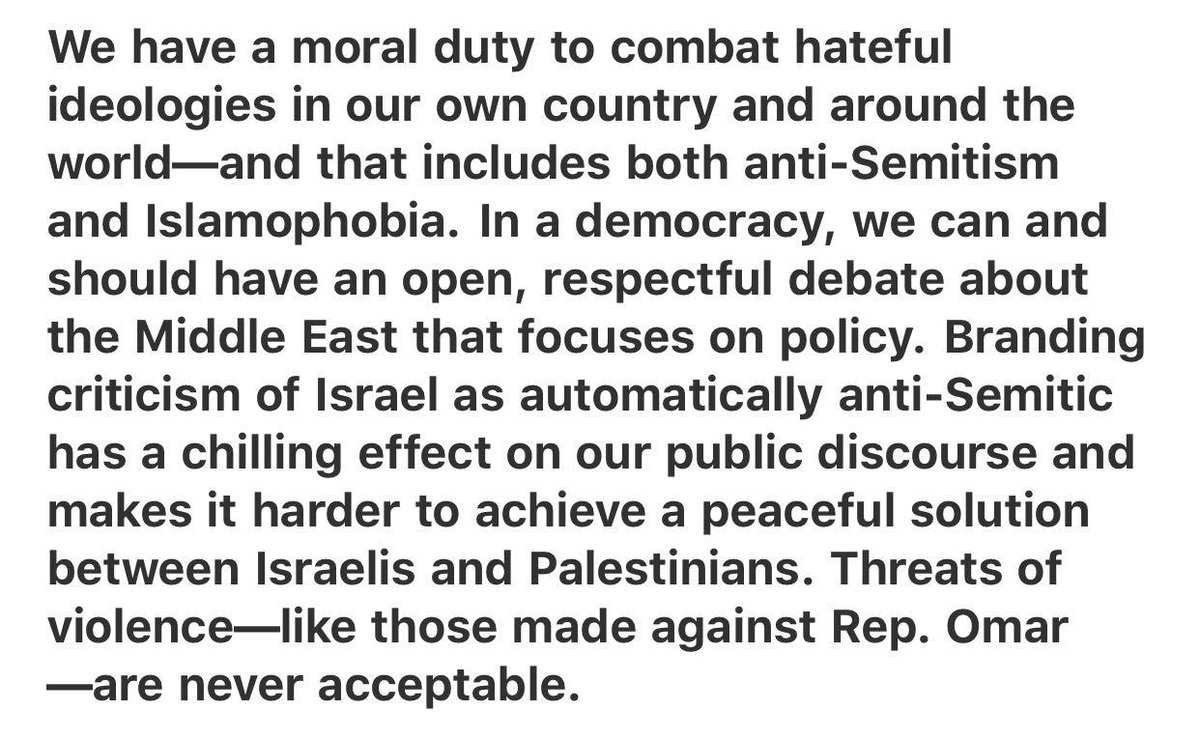 
Senator Elizabeth Warren stood up.  So did Senator Kamala Harris.

That's two who are running for the Democratic Party's presidential nomination.  A third to speak out Senator Bernie Sanders.

New: Bernie Sanders speaks out against Ilhan Omar treatment. "What I fear is going on in the House now is an effort to target Congresswoman Omar as a way of stifling that debate. That's wrong.”

Hot Take Monger Retweeted Daniel Marans
And there it is - @SenSanders becomes the only Presidential candidate to publicly speak about and *in support* of @IlhanMN against vicious attacks.
Hot Take Monger added,

Daniel MaransVerified account @danielmarans
New: Bernie Sanders speaks out against Ilhan Omar treatment. "What I fear is going on in the House now is an effort to target Congresswoman Omar as a way of stifling that debate. That's wrong.”
Show this thread
21 replies314 retweets1,306 likes

Thank you SO MUCH to @BernieSanders for being willing to call out Democrats in the House for their outrageous mistreatment of Ilhan Omar this week. We must be able to loathe & oppose anti-Semitism AND call out Netanyahu and his attacks on Palestine. huffpost.com/entry/bernie-s…
80 replies588 retweets2,539 likes

Daniel MaransVerified account @danielmarans
New: Bernie Sanders speaks out against Ilhan Omar treatment. "What I fear is going on in the House now is an effort to target Congresswoman Omar as a way of stifling that debate. That's wrong.”
Show this thread
41 replies290 retweets964 likes

Good for all three.  Bernie got more coverage above because I specifically called him out on his silence in yesterday's snapshot.  Bernie spoke out and was apparently the first one seeking the Democratic Party's presidential nomination to speak out.  Good for him.

The United Nations Population Fund (UNFPA) extends its gratitude to the Government and People of Japan for the generous contribution of US$ 1,339,285 to increase access to reproductive health services and strengthen the response to gender-based violence across Iraq.
While the country moves towards the reconstruction and resilience phase, the need for humanitarian assistance persists, and services established by UNFPA during the crisis need to be sustained in areas of internally displaced persons and returnees, and camps for refugees.

This new commitment will ensure increased access to emergency obstetric and newborn care (EmONC) as well as regular reproductive health services through the financing of 21 reproductive health clinics across the country. The contribution will also go towards providing survivor-centred case management and psychosocial support to gender-based violence survivors at the UNFPA-supported women centres, capacity-building of service providers as well as community mobilisation for gender-based violence prevention.


Reconstruction in Iraq?  Billions already donated over the years of the ongoing war.  Little accomplished.  But let's all pretend this has nothing to do with the vast government corruption.

This morning, Natasha Ghoneim (ALJAZEERA) reports on Mosul and reconstruction.


Last month, Iraq's inept prime minister, another puppet installed by the US government, made a for show display.

PM @AdilAbdAlMahdi chairs meeting of the Supreme Council for Combating Corruption, says the Council has a critical role to play in ensuring that the work of Iraq’s financial and integrity oversight institutions is effective, timely, inclusive and transparent. 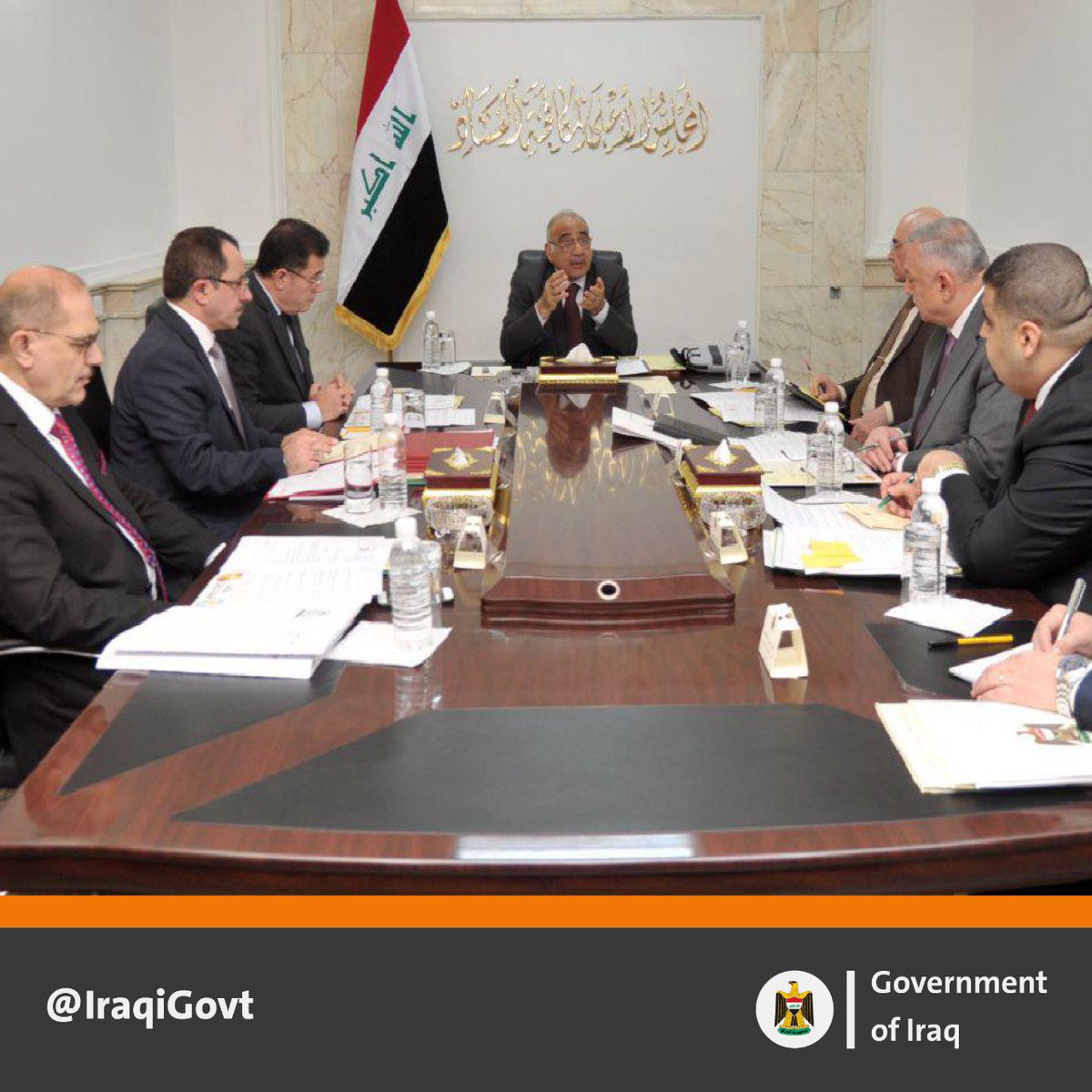 The land sits above the West Qurna oilfield. One of the most lucrative in the world, it is owned by the Iraqi government and run by Exxon Mobil. After years of sanctions and neglect, oil production in southern Iraq is picking up. A two-lane road that crosses the Bani-Mansour land has become a busy highway for lorries carrying drilling equipment and buses ferrying foreign oil workers back and forth. The windows of nearby homes rattle as the traffic passes.
The opening up of Iraq’s enormous verified oil reserves to foreign expertise in the aftermath of the fall of Saddam Hussein was hailed as the means to kickstart its economy and potentially transform the south into an economic stronghold. Instead, ordinary Iraqis have seen little or no benefit from the proceeds of the country’s multibillion-dollar oil industry, much of which has been siphoned off by corrupt politicians. Across the south in recent months, simmering anger over corruption and unemployment has been fuelled by the dire state of public services, regular power cuts and water shortages.
Once there was a time when the Bani-Mansour land, not far from where the Tigris and Euphrates meet, had water and more than 300,000 palm trees, villagers said. Large numbers of buffaloes and cows cooled themselves in the green muddy waters of its canals.
But drought and the intrusion of saltwater from the Gulf have wiped out most of the palm groves, the cattle have been sold, local rivers have dried up and the canals have stagnated, clogged with rubbish. Corruption and mismanagement on the part of local and central government, both dominated by a kleptocracy of religious parties that have ruled Iraq for more than a decade, has exacerbated a slow-motion environmental disaster.

Of 180 nations studied, Transparency International ranks Iraq the 160th most transparent.  Transparency?  Last May, Imran Khan (ALJAZEERA) reported that the Iraqi Parliament's transparency commission found that the equivalent of $320 billion in US dollars had been stolen over the last 15 years.  $320 billion.

The US government, year after year during the ongoing war, has hacked away at Iraq's rations program (in place before the 2003 start of the war) and tried to outright destroy it.  We're talking a simple program that covers items such as tea, sugar, flour, etc.  And the puppet government that has largely gone along with this hacking has looked the other way while $320 billion has been stolen.  Hack, hack, hack away.  This despite the fact that the World Food Programme has repeatedly warned that over half the families in Iraq live at risk of food insecurity.  Hack, hack, hack away.

Iraq’s Ministry of Trade has announced that it can no longer  provide all food items listed in the food ration supplied monthly by the government, citing lack of sufficient funds for the program in the country’s 2019 budget.

Deputy Trade Minister Walid Musawi said in a press conference in Baghdad that they need at least four trillion dinars ($3.3 billion) a year to account for the main five food items distributed on ration cards monthly.

The government provides rice, sugar, flour, cooking oil and heating oil to each family at subsidized prices on a monthly basis.

In this year’s budget passed recently only 1.5 trillion dinars—less than half of the needed funds—has been allocated to the ministry.


They've allowed $320 billion to be stolen and they can't afford $3.3 billion to cover the rations program.  Nouri al-Maliki's son has pricey digs in London and multiple sports cars -- apparently Nouri discovered magic beans.  That was sarcasm.  Nouri used his two terms as prime minister to loot the people of Iraq.  And remember, thug Nouri didn't just steal from the public treasury, he also took kickbacks. 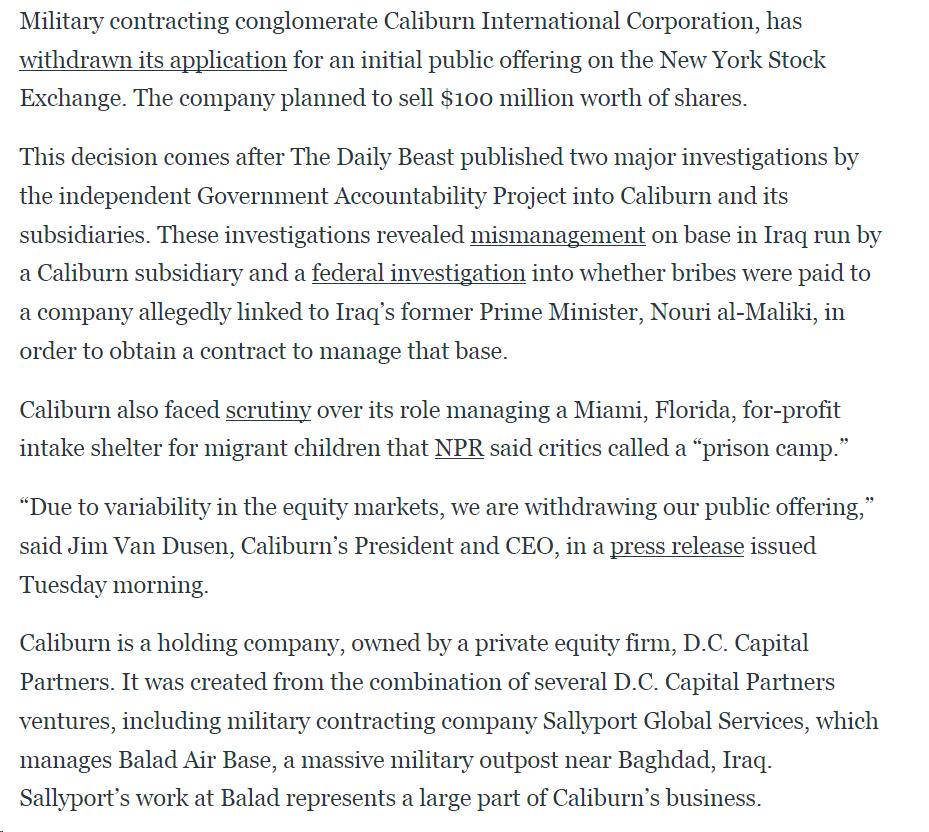 
In other news, truffles.  Dropping back to February 24th:

ALSUMARIA reports while collecting truffles in Anhu (Anbar Province), 1 civilian was killed by a bombing.  For those wondering about the sudden focus on truffle collectors in Iraq (and Syria) in the last weeks, it's truffle season.  Reporting today on the recent killing of 5 fishermen in Najaf, Mina Aldroubi (THE NATIONAL) notes the killings "came just a week after 19 people were abducted while truffle-hunting in the Al Nukhayb desert between the provinces of Najaf and Anbar. Seven were killed, nine have been released and three are still missing.  The victims' funerals were held on Wednesday in the holy city of Najaf, with their coffins covered in the national flag."  Shelly Kittleson (AL-MONITOR) adds:

Across the rocky and grass-speckled desert of western Anbar, it is white truffle season. Locals can be seen scanning the ground in search of truffles, along the road that stretches from Haditha to Qaim and then the Syrian border. Yet, in recent weeks, a rash of kidnappings and killings of truffle hunters has marred this seasonal tradition and raised concerns of Islamic State (IS) sleeper cells.
On Feb. 18, 12 men from Anbar, Karbala and Najaf were kidnapped while picking truffles in the al-Nukhaib district of southern Anbar province. The next day, six bodies were reportedly found in same area, which is close to the Iraqi border with Saudi Arabia.
Salahuddin province has also seen truffle hunters kidnapped or killed. Earlier this month, three brothers were kidnapped in the Makhoul Mountains. They were found dead, handcuffed and with bullet wounds, Feb. 8.
[. . .]
A security source in western Anbar told Al-Monitor Feb. 16 that several people, including some of his friends, had been kidnapped near Rawa the previous day while looking for truffles.
The family of one of the kidnapped men had received a ransom demand of $30,000, which was later lowered to $20,000, according to the source. He speculated that the kidnappings could have been orchestrated by criminal gangs using IS as a cover.


But harvesting can also be where the danger comes in, for the finest truffles are found where foragers face extreme threats. One such danger zone is the Iraqi-Saudi border, where in December, Saleh says, overzealous Iraqi guards shot what they thought was a smuggler but was actually a truffle forager.

“The truffles there are huge, the size of a pomegranate,” says Saleh, a hint of awe in his voice. “But only the guards are benefiting from them now.”

To the southeast you might encounter land mines, vestiges from the war with Iran. In the western Iraqi province of Anbar, home to the reddish, smaller iteration of desert truffle known as hargi, truffle hunters had to contend with the threat from Islamic State.

But for many, the danger is worth it, especially if market forces are on their side.

In dedicated markets stretching from Al Salman to Baghdad, hunters and merchants arrive before daybreak to peer at squat stacks of truffles piled on blankets and brimming in baskets alongside the street.