Epstein and his friends 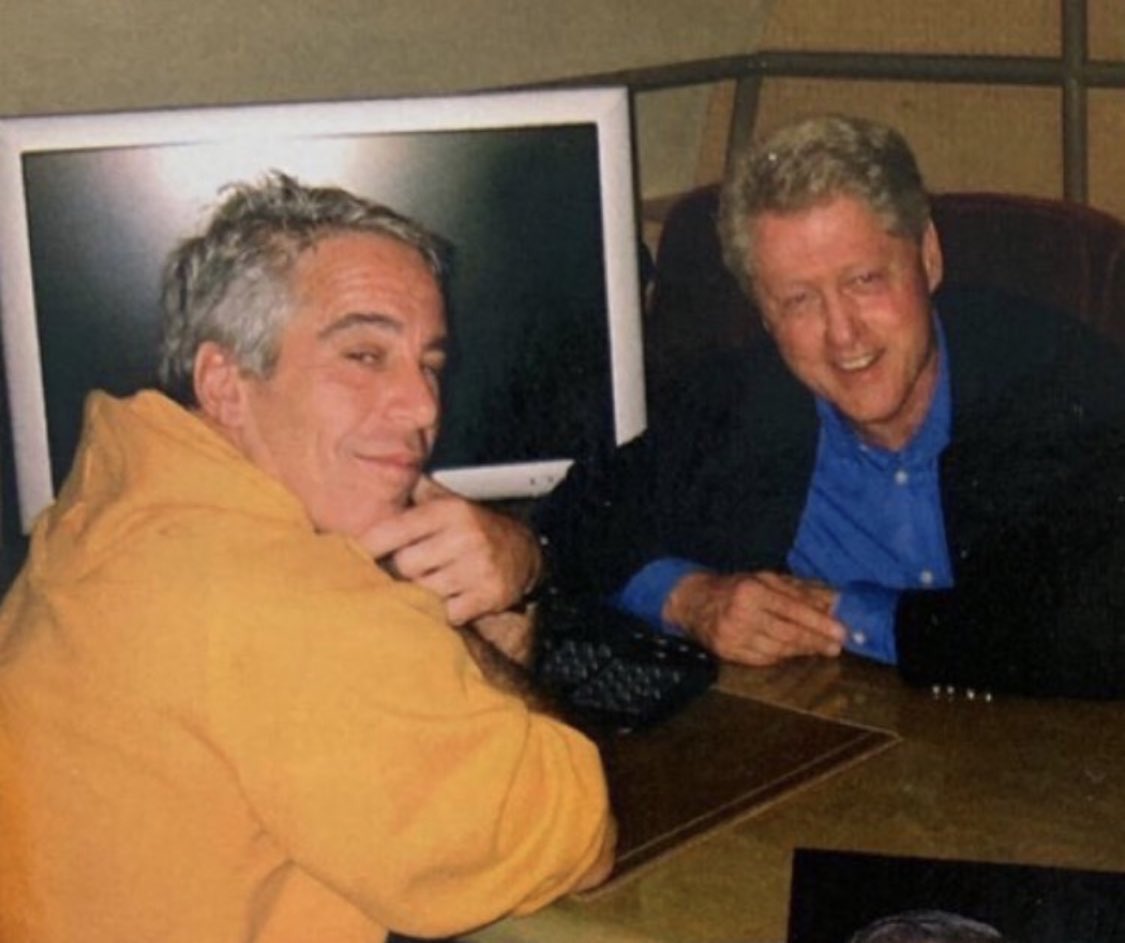 joshua rosner‏ @JoshRosner Jul 22
Disturbing! The #press wiped all pictures of ⁦@BillClinton⁩ & #JeffreyEpstein from the #internet. Even ⁦@VanityFair⁩ who published this image in ‘03 from their #sex(?) trip to Brunei scrubbed it. #sycophant #power ⁦@CJR⁩ ⁦@theintercept⁩ ⁦@propublica⁩


As noted yesterday, "Jeffrey Epstein and Bill Clinton go back further than Bill has admitted."

If you missed it, someone attacked Epstein in jail -- either someone else or himself.

So do you think he attacked himself?  Or was it someone else?

If it was someone else, was he attacked (a) because he was a pedophile, (b) because it was an attempted hit to shut him up or (c) something other reason.

Epstein had a lot of friends including crazy old woman Dianne Feinstein.


What a tacky wig she's wearing in that photo.

Starting in the US where a presidential election will take place in November 2020 and the race for the Democratic Party's presidential nomination is on.  Joe Biden stumbles and bumbles his way through a poorly planned campaign.

Joe is a nightmare.  He is one gaffe after another.  The bumbling vice president might be cute and funny but for the person who sits in the Oval Office, that's not what we want.

Yes, Gerald Ford got in there but on a pass.  He only got him because he was an (unelected) Vice President.  When he finally faced an election, he lost to Jimmy Carter.

Gerald Ford was never Richard Nixon's running mate.  Spiro Agnew was his running mate in 1968 and 1972.  Both times they won the election.  Spiro had to resign after the 1972 election in 1973.  At which point, Nixon selected Ford.

Ford was never on the ticket as Nixon's running mate.

When Ford faced election -- Nixon was forced out of office in disgrace and Ford became president -- it was 1976 and the voters went with Jimmy Carter.

As the saying goes, keep coming back, it works if you work it.


Joe Biden bumbles and stumbles along.  He really doesn't sit down interviews unless he can have someone beside him to say all the things he's afraid to.  Which is a real shame because one question that should be asked of him has not been asked.

Why are you running?

In 2016, Joe Biden was the sitting vice president.  Barack Obama had served two terms and could not run again.  When this happens, traditionally the vice president makes a run for the presidency.

Now he shows up promising to turn back the clock to the age of Obama.

What makes him more qualified now?

Why now but not then?

Or is that an attack?  The press seems to feel every question of Joe is an attack.  After all, they've declared him the front runner so any obstacle -- like his past, his present or his future -- that might impede his journey to the White House is an attack.


Here is the Fox News headline that Joe Biden is generating with his dishonest attacks on the Medicare for All legislation that is being pushed by more than 100 congressional Democrats video.foxnews.com/v/606254557600…

Joe's been attacking all along but hiding behind others to do it.  All that's changed is now he's carrying out his attacks all by himself.  Which should make the debate very interesting.  Speaking with the NAACP, he had a finger wagging moment that the press is largely ignoring but it bubbling up and becoming a problem.  Maybe, when replying to the African-American woman asking you questions in a sit down discussion, the thing not to do is point your finger at her as you huffily reply.

Again, the debate next week should be very interesting.

And maybe, another question, they can ask Joe why he ever supported mandatory sentencing in the first place?

Three strikes you're out?

If Joe had been ruled out of politics after three strikes, he wouldn't be allowed to run today.

Iraq?  His excuse is that he was tricked by Bully Boy Bush.  Outsmarted by the village idiot as a campaign strategy?  Again, let's note Ryan Grim (THE INTERCEPT):


Joe Biden’s new foreign policy adviser was a supporter of the Iraq War while serving in the George W. Bush administration, though he now says it was “a pretty serious blunder.” Nicholas Burns, whose hiring was first reported by CNN on Monday, has also called NSA whistleblower Edward Snowden a “a traitor.”
Biden, of course, was a supporter of the war himself and later advocated splitting Iraq into three independent countries along sectarian lines. In the runup to the war, Biden was chair of the Senate Committee on Foreign Relations.
Burns worked on the National Security Council staff under presidents George H.W. Bush and Bill Clinton. He then served as ambassador to NATO, and later undersecretary of state for political affairs, the third-ranking position in the State Department, under George W. Bush. Burns retired in 2008 from public service and has since been a senior counselor at the Cohen Group, a global lobbying and influence firm, as well as a professor at Harvard’s Kennedy School. He was an adviser to the presidential campaign of Hillary Clinton.
According to his Harvard resume, he is a consultant for Goldman Sachs. His Harvard bio also lists speeches he gave in 2018, some of which he says he was paid for. He spoke to Bank of America, State Street, CitiBank, Honeywell, and a number of other companies, universities, and associations.

“The most important thing Joe Biden needs to prove regarding foreign policy is that he has learned from his disastrous decision to support going to war in Iraq and other foreign countries around the globe,” said Alexander McCoy, political director of Common Defense, a progressive, grassroots veterans organization. “It’s not encouraging that, out of countless possible choices, Joe Biden selected a foreign policy advisor who also supported the invasion of Iraq, the biggest foreign policy mistake of a generation — a mistake that veterans like us still are suffering the consequences of.” McCoy added that Biden had yet to sign the group’s pledge to end the nation’s “forever wars.”

Joe has made a lot of mistakes but what is worse is he never seems to learn from them.

On the topic of Iraq, NDTV notes:

The commander of a U.S. Special Operations task force in Iraq has sent home a platoon of Navy SEALs for drinking while deployed, U.S. defense officials said, the latest discipline incident that has emerged for an elite force relied upon heavily by the Pentagon.
U.S. Special Operations Command said in a statement Wednesday night that the platoon was forced out early to San Diego "due to a perceived deterioration of good order and discipline within the team during non-operational periods" of their deployment.
"The Commander lost confidence in the team's ability to accomplish the mission," the statement said. "Commanders have worked to mitigate the operational impact as this SEAL platoon follows a deliberate redeployment."
The statement did not state what prompted the decision, but two defense officials with knowledge of the issue said that SEALs drinking alcohol prompted it. The officials, speaking on the condition of anonymity due to the sensitivity of the issue, said that the SEALs violated General Order No. 1, which bans alcohol use.


Let's wind down with this from the Connecticut Green Party:

NEW LONDON, CT — Community organizer and author Frida Berrigan has begun collecting petition signatures for ballot access as she seeks the Green Party nomination to run for Mayor in the November elections. A newcomer to electoral politics, Ms. Berrigan has a long history of involvement, at the local and national level, in support of peace, social justice, and environmental responsibility.


“I am a parent and a community gardener. I try to be a good neighbor. I have sought to support existing initiatives, show up in solidarity, lead from behind and create conversations. I am not an expert in anything. But, it seems to me that the mayor’s job is to be present and listen, catalyze conversation, invite inquiry and question assumptions. I can do that.”

The Green Party will hold its nominating convention at Riverside Park on Sunday, August 4, at 5:00 p.m. Candidates are still being recruited for City Council and Board of Education; individuals who would like serve as elected officials and to join a campaign focused on involving young people in the political arena; celebrating New London’s racial, economic, and ethnic diversity; and making space for new ideas are encouraged to contact the Green Town Committee at info@nlgreens.org.

The Green Party is committed to peace, social and economic justice, ecology, and grassroots democracy. Due to our firm belief that government should be accountable to its citizens, New London Green Party candidates do not accept contributions from corporations, lobbyists, political action committees or labor unions. For further information regarding the New London Greens, visit nlgreens.org.