Not a good night to be Joe 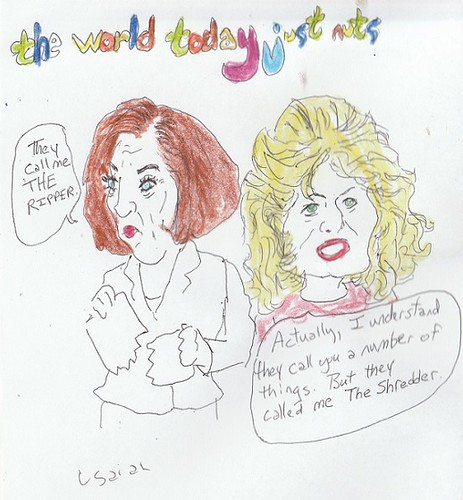 This FOX NEWS story tells us that, earlier today, Joe Biden was heckled at a New Hampshire event.  It doesn't tell us one work the supposed heckler said.

That's part of the story.

And how do we know it's a heckler.  It's a campaign event, open to the public.  It may just be a voter with serious concerns.  Why not let us decide?

More to the point, I'm not impressed that Jill Biden took it upon herself to silence the citizen.

It's not a good night for Joe Biden.

NBC News‏Verified account @NBCNews 2h2 hours ago
BREAKING: In New Hampshire Democratic primary, Joe Biden and Sen. Warren will not reach the 15% threshold statewide and in each congressional district, according to the @NBCNews Decision Desk, meaning they will not receive delegates from the #NHprimary. https://nbcnews.to/2waslgW
44 replies251 retweets455 likes


Today, in the US, Americans hope for some clarity on where the electorate is leaning for the Democratic Party's presidential nomination.  New Hampshire holds the first primary in the nation.

We review that for a baseline, yes, but also because some press outlets just flat out lie.

For example, in an unsigned piece at POLITICO from last November, this lie was published: "In 2016, Clinton won New Hampshire by less than 1 point."  Hillary did not carry New Hampshire.  What a lie and what an embarrassment for POLITICO.  From WIKIPEDIA: "The 2016 New Hampshire Democratic presidential primary took place on February 9. As per tradition, it was the first primary and second nominating contest overall to take place in the cycle. Bernie Sanders defeated Hillary Clinton in the primary by a margin of more than 22% in the popular vote. Sanders claimed 15 delegates to Clinton's 9.[1]"


Who's on the ballot this go round?  Pretty much everyone.


WIKIPEDIA notes the following made the ballot:

Iowa blew its chance to have any real influence.  Tonight, New Hampshire has a shot.  What's the media saying?

Krystal Ball‏Verified account @krystalball 40m40 minutes ago
Listening to CNN right now already saying that it’s not enough for @BernieSanders to just win New Hampshire. I’m sorry but these people are delusional. He doesn’t need to radically change the dynamics of the race. If things hold as they are he will win.
160 replies412 retweets2,788 likes

Good morning New Hampshire!!! Go vote for Bernie Sanders!!! As @AOC said last night we are at a crossroads in our democracy. Take the path towards justice and compassion.
9 replies221 retweets1,208 likes

Ilhan Omar‏Verified account @IlhanMN 12m12 minutes ago
Ilhan Omar Retweeted The Intercept
.@BernieSanders is that president. 45 million Americans are drowning in student debt. That isn’t just a statistic — it’s a systemic failure. Our legislation will cancel every penny of the debt that’s keeping young people in poverty.
Ilhan Omar added,
The InterceptVerified account @theintercept
Yes, a progressive president could cancel student debt on Day One — by following the grassroots interc.pt/37bOvfk by @natashalennard
152 replies166 retweets928 likes


Bernie Sanders is +18 against Trump with Independents. Important considering a large plurality of voters identify as independent over either party, and it’s been that way for years now. news.gallup.com/poll/15370/par… 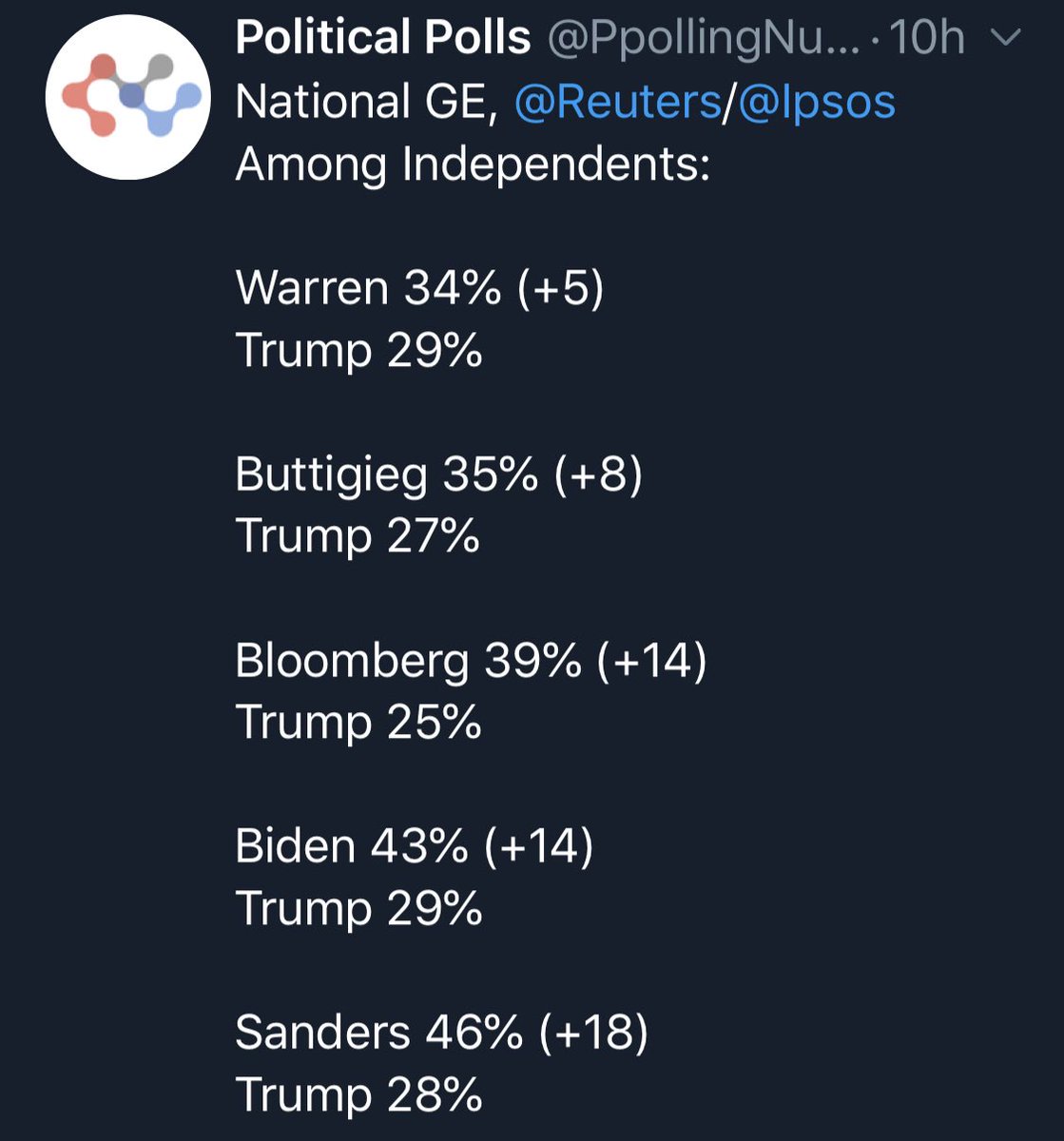 People for Bernie‏Verified account @People4Bernie 9m9 minutes ago
TODAY is the New Hampshire Primary. Post to #BernieForNH your favorite moments from the lead up to today. Canvassing pictures, rallies, phonebanking stories, or just post why New Hampshire votes should vote for @BernieSanders Find your polling location: berniesanders.com/newhampshire/

baghdad 🇮🇶‏ @Sahat_Altahreer 4m4 minutes ago
Replying to @SecPompeo
These crimes in Iraq, where are the human rights, where is the UN representative? 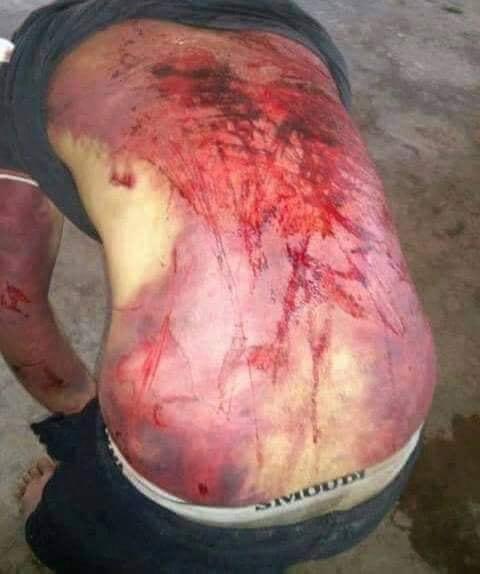 1:02
Middle East MonitorVerified account @MiddleEastMnt
#WATCH In a hilarious response to Sadr's assertion that protests should be gender segregated, Iraqi Twitter have been…
0 replies0 retweets0 likes

Daniel‏ @Danielf188 18h18 hours ago
In response to Muqtada Al-Sadr's tweet calling for separating men and women between the sexes The slogan of the #Iraqi youth: We Iraqi youth are not the ones who bow to a tweet in Twitter. #IraqProtests #iraqmillionmanmarch
/>
0:04
0 replies0 retweets0 likes


Iraqis laugh at his notions.

And they look at him and wonder, as he flees to Iran constantly, what kind of marriage does he have?

The 45-year-old took part in an arranged marriage in 1995.  He's rarely in the same city as his wife and they have no children.  I guess that's the sort of segregation Moqtada practices in his marriage.  Maybe he doesn't like women?  That would explain a 25 year marriage that has produced no children.

hadooola. 97‏ @9GYZWRHcsZwGUu1 4m4 minutes ago
Replying to @SecPompeo
Muqtada al-Sadr should be included in the list of terrorism, because he sends signals to his followers on Twitter to kill civilians, killing more than 15 civilians only for his three tweets. We hope to close his account on Twitter as well, because he is a terrorist.

The Baghdad Post‏ @BaghdadPostPlus 8h8 hours ago
Protesters who claim they were threatened and tortured by Shiite cleric Muqtada al-Sadr’s armed militiamen in Baghdad are fleeing to Erbil to avoid being jailed under Iraq’s counterterrorism law. #BaghdadPost #IraqProtests #saveIraqipeople #FreeIraq
0 replies1 retweet3 likes

Isaiah will have a comic later today, THIRD goes up with new content shortly.  The following sites updated:

On the Edge
Tuesday Reads
16 minutes ago