That's Peggy Lee singing Jimmy Webb's "By The Time I Get To Phoenix" which was a huge hit for Glenn Campbell.  I had never heard that version until recently.  It's from her 2 SHOWS NIGHTLY album which is pretty amazing and which she grew to doubt and halted its release at the last minute, after promo copies had been sent out to reviewers.

It's a great album and she really was an amazing singer.

Rukmini Maria Callimachi -- THE NEW YORK TIMES made her a star 'journalist.'  Not because of serious reporting but because of attention getting stunts.  Long before she broke every ethical rule in the book by smuggling evidence and records of terrorism out of Iraq, her journalism was already problematic.  The Sunnis were the first to complain on social media about her coverage which was reductive and racist.  Then we learned that she was lunching with the militants (militia members) she was covering and this after two journalists contacted us to state that she was not reporting the abuses the militia was carrying out -- even when she witnessed them.

Her fellow reporters at THE TIMES also had problems with the 'star.'  Eric Wemple (WASHINGTON POST) reports:

Several Times journalists who had long ago alerted their superiors to problems with Callimachi’s reporting felt that the Times’s mea culpa contained a gap: Where was the pointed acknowledgment that “Caliphate” was a wreck several years in the making? Sure, the editor’s note cited editorial breakdowns in the vetting of the podcast series. But why not admit that editors shunted aside complaints about Callimachi long before assistant managing editor Sam Dolnick approached Callimachi about making a podcast on the Islamic State?

Those journalists had reason to believe such an admission was afoot. On Thursday, top editors at the Times presided over a meeting with staffers who had worked with Callimachi over the years. Multiple sources who attended the meeting described it as a painful affair in which masthead officials acknowledged lapses in management and their subordinates blasted them for not acting on their flares.

Particularly outspoken was C.J. Chivers, a former foreign correspondent and now a staff writer for the New York Times Magazine. Chivers was among the first Times reporters to channel his worries to editors at the paper. For his presentation at the Thursday meeting, Chivers spoke from prepared remarks. He said: “Warnings were not just dead letters. They became a basis to impugn people personally and professionally.”

Staffers had a great deal to say. One objected that Callimachi’s work had embraced stereotypes of Muslims and that if the newspaper had treated African Americans in the same way, the Times would have much bigger problems. A staffer from the Washington bureau noted that a masthead official had warned journalists in the capital to independently verify Callimachi’s contributions to collaborative stories. Another gripe: Washington reporters were commonly hauled in at the 11th hour to buttress reporting in Callimachi’s stories. Such a scenario occurred in Chapter 6 of “Caliphate,” when three D.C. reporters were drafted to press U.S. officials on the alleged activities of Abu Huzayfah.

THE POST's Liz Sly summarizes Erik Wemple's article in the Tweet below:

's reporting for years before the Caliphate fiasco & were accused of "professional jealousy." Now they are furious those flags aren't being acknowledged by the

The fact that
@rcallimachi
can still label herself a journalist at the
@nytimes
is a stain on organisation’s reputation and credibility. Ignoring native voices and false construction of narratives should not be encouraged in creative media, and film, let alone journalism 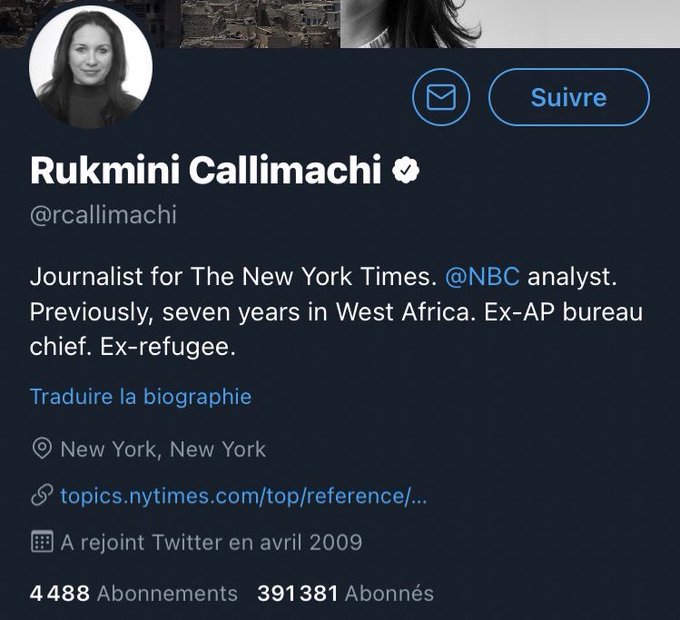 Genuine experts on the Mideast, West Africa and Jihadism have been raising doubts about Rukimini Callimachi’s reporting for years. One of the best critiques, by the journalist and author Laila Al-Arian, starts by providing simple information that the Times’s half-hearted apology left out. Callimachi’s podcast says she found Chaudhry, the ISIS fraud, “though a researcher named Anat Agron.” She didn’t add that Agron works for MEMRI (the Middle East Media Research Institute), the pro-Israel organization notorious for “mistranslating items and cherry-picking incendiary sources” that are aimed at portraying the Arab and Muslim world negatively, as Al-Arian says. She also notes that Callimachi speaks little or no Arabic, which would seem to be a drawback for a jihadism expert.

Al-Arian eloquently summarizes what’s been fundamentally wrong all along with Callimachi’s work:

I believe Callimachi’s reporting on ISIS over-emphasizes religious ideology while stripping the group’s emergence and growth from its geopolitical context, specifically Iraq, a country that was destroyed by the 2003 U.S. invasion and occupation, which also led to the destabilization of the region as a whole. A leitmotif of her work is that ISIS and other jihadi groups are a legitimate and perhaps revealing manifestation of Islam.

Another genuine expert who the Times did not seek out is Alex Thurston, a professor at the University of Cincinnati who has just published a remarkable book called Jihadists of North Africa and the Sahel. Thurston warns that Callimachi is an example of what he calls “terrorology” — by which he means “deliberately alarmist and reductive analysis of jihadist movements and ‘terrorist groups.’” He notes that Callimachi “has a pattern of outsourcing much of her analysis to terrorologists such as those at the Foundation for the Defense of Democracies (FDD) and its spinoffs.” (The FDD, of course, is the pro-Israel think tank in Washington, D.C. that spends much of its energy trying to instigate the U.S. into attacking Iran.)

Let's check in on our decade's new Judith Miller: Rukmini Callimachi (yes, that does sound like a figure from the Brothers Grimm):

Rukmini Callimachi‏Verified account @rcallimachi  9h9 hours ago
Replying to @rcallimachi
7. Analysts have long that the ppl running Amaq can't be just in Iraq/Syria bc of how quickly they claim attacks & bc they upload videos:

Rukmini fancies herself a terrorist expert.

Judith Miller, of course, started with THE PROGRESSIVE.

You may remember that when the magazine was celebrating its anniversary (they said the 100th, but no, it wasn't), they failed to note Judith once in their look back on the past.

Judith Miller ended up a terrorism 'expert' herself.

Remember, that's how Oprah Winfrey presented Judith on her talk show when she brought Judith on to promote the upcoming Iraq War and then Oprah attacked the audience member who dared to point out that Judith was presenting non-facts as facts.


Glenn Greenwald loved him some Judith Miller back then -- part of the reason he supported the Iraq War.

He loves him some Rukmini.

Rukmini's been hired by THE NEW YORK TIMES mainly to prove that they learned nothing from the Judith Miller fiasco.

Which is how Rukmini was in Mosul (as an embed -- as they say, "embed roughly means 'legs spread'").

And we called out her nonsense.

But there was Glenn Glenn, in love again, reTweeting her because critical abilities are in short supply apparently.

While Rukmini filed her propaganda and Tweeted her nonsense about how wonderful things were, a real reporter did real journalism.


Ali Arkady did not file fluff.

His documentation of what is taking place in Mosul has been covered by RT and ABC NEWS.


"Negative coverage will get you kicked out of Mosul."

They had nothing to worry about with regards to Rukmini, did they?


Officers of an elite Iraqi special forces unit, praised by U.S. military commanders earlier this year for its role in fighting ISIS, directed the torture and execution of civilians in Mosul in at least six distinct incidents caught on tape.

“That's a murder,” retired Green Beret Lt. Col. Scott Mann told ABC News after reviewing the graphic footage. “There should be punishment for anyone doing it. It's reprehensible and it shouldn't be allowed on any modern battlefield."

The alarming footage was smuggled out of Iraq by a prize-winning Iraqi photojournalist, Ali Arkady, who spent months embedded in combat with the elite Iraqi troops leading the fight against ISIS late last year. Since turning over his cache of photos and videos to ABC News, he says he has received death threats from the soldiers he once considered friends and has now fled Iraq to seek asylum in Europe.

"This is happening all the time," Arkady said of the war crimes he documented, which he recounted in an exclusive interview with ABC News’ Brian Ross broadcast Thursday on ABC's World News Tonight with David Muir and Nightline.

Am I wrong that Glenn hasn't been eager to promote this story?

I know he's got a lot of problems right now because THE INTERCEPT burned a source -- intentionally or not, it doesn't matter, they burned her.

Nothing is going to change that.

There should be an apology (not a blood letting) and they should announce how they will do their best not to burn another source in the future.

So, yes, he has problems, but so does Iraq and he needs to be Tweeting about that if he can't write about it.

He has found time to reTweet Rukmini.


It's a shame he can't use his Twitter feed to amplify real reporting on Iraq.

But that's a shame many share and part of the reason the Iraq War is on year 14 and counting (more if we backdate to the sanctions, et al).

You can call Rukmini many things -- the new Judith Miller, the Hobby Lobby of Journalists, a disgrace -- you just can't seriously call her a reporter -- not a good one.  People need to grasp how serious this is -- that she saw the unit she was embedded with execute civilians and she didn't report it (we first noted that allegation March 3, 2017).  Not only that, when others did report it, she insisted she never saw any abuse on the part of Iraqi forces (militia).

The paper learned nothing from the Judith Miller scandal.

Rukmini's racism fed a narrative that is part of the paper's continued war on Muslims.  They ramped up that war after 9-11 and it's allowed them to run with any claim and present it as fact -- as verified fact.  Laila al-Alarian Tweets:

Since there seems to be no retribution for a monumental failure like Caliphate, which was downloaded by millions, helped shape narratives and policies, proves my original point that there's a double standard when it comes to media coverage of the Middle East and lack of scrutiny.
6:49 AM · Dec 18, 2020

To
@deanbaquet
: a slap on the wrist "reassignment" is not a sufficient response to #Islamophobia & #racism. Firing
@rcallimachi
& taking down #caliphate #podcast series is the only option to remedy "institutional failure." Will
@nytimes
end #misrepresentations & #distortions?
10:37 AM · Dec 20, 2020

We need to all grasp that it's not just that Rukmini filed garbage, it's that the paper let her do so.  They do very little coverage of Iraq to begin with.  And they let her nonsense flood the paper, they created a podcast series for her and they called this Middle East reporting.  They pimped that garbage as evidence that they were covering the region.  Real stories and real issues were ignored so that Rukmini's garbage could 'flood the zone.'  The damage done is not just the lies that she wrote and the paper printed, it's that her garbage prevented other coverage from breaking through.

And when does NYT's Assistant Managing Editor Sam Dolnick get called to the carpet?  As I remember it, when they won a Peabody for the podcast (and were praised by Ronan Farrow), the first person named when Rukmini's partner Andy Mills accepted the award.  Am I remembering that wrong?  (No, I'm not.  I also remember Andy crying in his speech as he spoke of the importance of good journalism.  I thought his cry baby nonsense was comical in real time and it's only funnier now.)

On that Peabody, THE TIMES has returned that award.  In addition, Australia's ABC notes, "The Overseas Press Club of America also said it was rescinding its honour for the series."