"Kat's Korner: If you can snap up Adele's 30, do so, if you can" is my review of Adele's latest album. Hope you enjoy it.

I loved the Bangles -- much more than the Go-Gos.

Monday, November 22, 2021.  Still not final count on the votes in the October 10th elections, another legal challenge heads to the court to toss the results, a 12-year-old is forced into marriage by an Iraqi court, and much more.

Reminder, Diana Ross' THANK YOU album is out but the elections results in Iraq are still hidden.  "Let's Do It" is a track on Diana's new album.

Iraq's Fateh Alliance, the country's most prominent Shia coalition, yesterday announced that it had filed a lawsuit with the Federal Court to annul the parliamentary elections results.

Leader of the alliance, Hadi Al-Amiri, said "sufficient evidence" had been submitted to the Federal Court on Thursday "to annul the results of the parliamentary elections".

The Fateh Alliance includes the political wing of Asaib Ahl Al-Haq, which the United States has designated a terrorist organisation, and the Badr Organisation, which has ties with Tehran and fought alongside Iran in the 1980-88 Iran-Iraq war.

There's been a set back for one voting bloc.  YENI SAFAK reports:

Iraq’s Independent High Electoral Commission on Saturday announced the exclusion of the Hashd al-Shaabi militia, or Popular Mobilization Forces, from the list of security forces who will vote in next week’s parliamentary elections.

"The commission formally addressed the Popular Mobilization Authority to submit the names of their members to be included in the register for the security forces eligible to vote," spokesman Jumana Al-Ghalai said in statements cited by the Iraqi News Agency.

But the Shia militia group did not submit the names of its members on the specified date, according to Al-Ghalai.

They're referring to early elections which take place October 8th.  As Mina Aldroubi (THE NATIONAL) explains, "This means fighters must return to their home districts to cast their ballot."

There were lies throughout the coverage in the west.  Supposedly Moqtada al-Sadr wasn't participating which would have meant that his bloc wasn't participating.  You can't announce in August you're participating and be on the ballots.  Moqtada had 90 candidates running for the Parliament.  Early results indicate that 70 may have won.  But it was one lie after another.  One distortion.  The claim that the final results would be known the day after the election because they had switched to electronic voting and much more.

It has been one lie and one distortion after another.  The Iraqi people were not enthused about the elections to being with -- it was the lowest turnout since the 2003 invasion -- and nothing that has happened since has instilled any trust in the process.

Miss Moqtada is not pleased.  Who cares?  Princess got paid off by the US government in August, paid off nicely.  Who cares what Moqtada thinks.  Jason Ditzy and the so-called ANTIWAR.COM club does.  They live to lap at Miss Moqtada's PTM.  They can't get enough of it.  They shape coverage to suit Moqtada, they distort to suit Moqtada.  It's a lot like all those years they spent celebrating Nouri al-Maliki.  A thug who destroyed Iraq.  And they've never apologized for it.  They've never acknowledged how wrong they were.  They just move on and pray no one notices.  Part of the blame for being wrong goes to Patrick Cockburn -- you know, the "Iraq expert" who can't stop writing about US politicians because, after all, that's what an "Iraq expert" working for a UK publication does, right?  No one forced them to listen to that loon.  They chose to.  And it led to their applauding a thug and mass murderer.  When do they plan to take accountability?  Considering Jason Ditzy is still distorting reality when it comes to Iraq, I think they need to get honest.  Real damn quick.

And let's be clear for Jason Ditzy, no results are being changed.  If the outcome is different from the projected results of October 11th?  Those weren't final results.  You really need to grow the hell up and grasp how damn little you understand about Iraq.  Reading the occasional western report on Iraq does not inform you enough to be commenting.

As for pressure -- Moqtada condemning pressure?  Anyone who knows his history has to be laughing.  Remember when he conducted a poll among his cult for who he should support for prime minister?  Remember who won and who lost in that poll?  Jason Ditzy doesn't even know what we're talking about.  ANTIWAR.COM slept through that -- like so much else.  And then what did Moqtada do?  Under pressure from the Iranian government, Nouri ignored the results his own followers delivered.

Only an idiot offers the commentary Jason Ditzy offers.  An ahistorical idiot who never paid attention but thought listeneing to Paddy Cock-burn talk to Scott Horton counted as essential knowledge.

This would be the same Paddy Cock-burn who got the execution of an Iraqi woman wrong and, when it was pointed out loudly online for a full week, went back and corrected it without ever noting that he'd corrected how the woman was executed.  Standards?  Patrick has none.

War has destroyed Iraq and Iraq's been damaged by the thugs the US has put in charge of the government.  They've destroyed the rights of women.  Here's only one example.  AFP reports:

An Iraqi court adjourned a hearing Sunday to allow a man to formalise his religious marriage to a 12-year-old girl, according to a lawyer for the girl's mother, who opposes the union.

Rights activists protested outside the Baghdad court with banners such as "the marriage of minors is a crime against childhood", while lawyer Marwan Obeidi told AFP the case had been postponed until November 28.

The legal age for marriage in Iraq is 18 but can be lowered to 15 in cases of parental or judicial consent, according to charity Save the Children.

"Religious marriages are not permitted outside civil or religious courts but these types of marriages still happen regularly and can be formalised on the payment of a small fine," it said in a recent report.

The mother, who refuses to be identified, said her daughter Israa had been "raped" and that the girl's father kidnapped her.

Israa was raped by the man her father forced her to wed, according to activist and feminist Yanar Muhammad. “The cleric went and married her to a rapist husband and he is here today to ratify the contract in court,” Muhammad told Rudaw’s Halkawt Aziz early on Sunday morning.

She was among a group of women protesting outside the courthouse where Israa’s mother was trying to stop the legalization of the marriage.

The Organization of Women’s Freedom in Iraq (OWFI) in a statement on Facebook demanded the abolishment of Israa’s marriage contract and called for the imprisonment of her father and the man she was forced to marry. It also called for the enactment of a law that criminalizes all marriages of minors.

Israa’s case inspired rage on social media after the community police published a statement on October 29 saying that the child, in the presence of her father, brother, and so-called husband, confirmed that the marriage took place with her consent, and “without anyone forcing her.” Social media users accused the authorities of complicity in what they described as a crime.

“Iraq is selling our daughters,” Muhammad said angrily, questioning whether the law protects girls or not.

Nisrine Jaouadi (MOROCCO WORLD NEWS) adds, "The news sparked an uproar among right activists who took to the streets to protest outside the Baghdad court, carrying banners reading 'the marriage of minors is a crime against childhood'."  The Borgen Project notes:

According to the International Federation of Gynecology and Obstetrics (FIGO), the percentage of women aged 20-24 who married before the age of 18 was 27% in 2018, indicating that the current female population of those married before the age of 18 in Iraq consists of 5.6 million out of 20.7 million women. FIGO also reports that child marriage is more common among impoverished families who reside in rural areas, rather than among wealthy families who live in urban areas. The percentage of child marriages in rural versus urban areas differs by 1%, signifying that approximately 207,000 more young girls enter into early marriage in rural areas than urban areas.

Child marriage supporters in Iraq continuously push for proposed amendments to the Personal Status Law to abolish legal difficulties when forcing children into marriage. The parliament in Iraq has rejected these proposals, including an amendment that would allow for families to have their own laws in religious communities, thereby authorizing the families to offer their 8-year-old daughters for marriage.

Article 8 of the Personal Status Law allows a loophole for judges to authorize underage marriages with or without permission from a father, even though the article is noncompliant with the Convention on the Elimination of All Forms of Discrimination Against Women (CEDAW), which works to gain equality for women and eliminate patriarchal norms that discriminate against women.

CHILD ABUSE. #ChildRights activists protested against a marriage of a 12-yr.-old girl outside a Baghdad court on Sun. saying “the marriage of minors is a crime against childhood”. Child marriage is common in #Iraq and other Arab countries.
@SavetheChildren
https://rightscorridor.com/religious-marriage-of-12-year-old-girl-causes-outrage-in-iraq/ 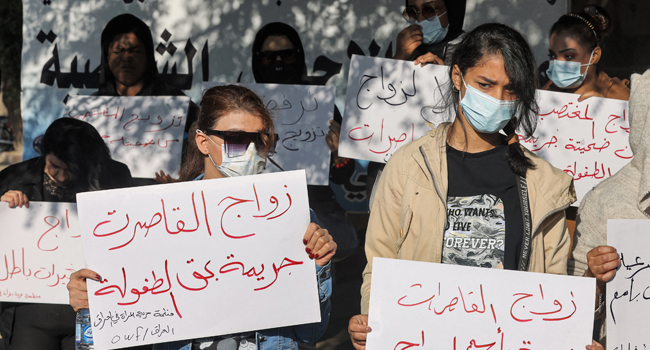 In other news, XINHUA reports:

Although 18 years have passed since being arrested by the U.S. forces and detained in notorious Abu Ghraib prison, Alaah Karim Ahmed still keeps his identification bracelet, as a reminder of the brutality of the U.S. occupation in Iraq.

In an interview with Xinhua at Ahmed's home in the town of Duluiyah, Salahuddin province, the 39-year-old former prisoner recalled the shameful abuse and brutal torture by U.S. soldiers against detainees in Abu Ghraib prison.

On Nov. 30, 2003, Ahmed was arrested by U.S. soldiers when heading to start his campus life at the Tikrit University in Salahuddin.

Ahmed was in the wrong place at the wrong time. When the university freshman got out of his car, a roadside bomb hit a U.S. patrol on the main road. Ahmed was arrested immediately.

Ahmed recalled his traumatic experience in U.S.-run prisons in Samarra and Tikrit, before being transferred to Abu Ghraib prison to begin his misery with torture and an unknown fate.

"I was severely beaten, handcuffed and shackled. They once hung me upside down for more than an hour," Ahmed told Xinhua while showing scars of torture that are still visible on his body.

Kat: 's "Kat's Korner: If you can snap up Adele's 30, do so, if you can" went up early this morning.  The following sites updated: